Move over mimosas, because America has a fresh New Year’s tradition: struggling to get tested for COVID before returning to school or work.The line for brunch was replaced, last weekend, with line after line after line of weary citizens waiting to receive their viral clearance.Testing backlogs are only going to get worse from here, as case numbers continue their ascent .But amid the complaints about a lack of rapid-testing kits and long delays for lab results, I’m reminded of the adage “You are not stuck in traffic.

You are traffic.” Yes, the system failed us: Inadequate public investment in the nation’s testing infrastructure has worsened the congestion.But we can help ease it too—and clear the way for those who have the greatest need for their results—by staying off the road whenever possible.

After weeks of bad press, the government is now trying to intervene more aggressively.“ I know you’re tired, really, and I know you’re frustrated ,” President Joe Biden said before the holidays, announcing that his administration would give away 500 million rapid tests starting in January.But even if this does ameliorate the testing traffic somewhat, it won’t resolve our national shortage.

At the time of Biden’s statement, the government hadn’t actually finalized the contracts for the massive purchase.Newly authorized at-home tests from Roche and Siemens will also launch in January, yet their supply will number only in the “ tens of millions ,” at least at first.As for laboratory testing, the near-term prospects may be even dimmer: PCR technology cannot scale as readily as simple antigen tests.Over the past two years, labs have worked around the clock to offer millions of PCR assays daily, but further expansion has been hampered by global supply-chain disruptions and a long-simmering staffing crisis .

It’s possible to feel outrage at this state of affairs while behaving as responsibly as possible, given the circumstances.This is the testing version of vaccine equity : the effort to ensure that life-saving inoculations don’t disproportionately benefit the healthiest and wealthiest people.When the same principle is applied to diagnostics, it means that people at the lowest risk from COVID shouldn’t buy up large stocks of at-home tests, or grab PCR appointments when they’re not experiencing symptoms.

Many of those queuing up for tests this week have little choice about the matter; negative results can be required for travel or school or access to public venues.

But other types of COVID screening—before and after family gatherings, for instance, or while visiting nearby vacation destinations—are optional.

It might seem reckless to suggest that people undergo less surveillance; indeed, the standard expert’s take has been the opposite, that we all should screen ourselves as often as possible in order to help reduce community spread.

But even with increased testing, we stand little chance of controlling Omicron this winter at the population level.And testing is, for now, a zero-sum game.Each unnecessary swab that you consume means one fewer is available for more important purposes—such as diagnosing a symptomatic infection.

Paxlovid, the more effective of the two, can prevent up to 88 percent of hospitalizations or deaths in people who start taking it within five days of symptom onset.A more familiar treatment, remdesivir, can also help prevent severe outcomes —but it works best when it’s given early in the disease.In other words, it’s never been more important for vulnerable patients to know, as soon as possible, that they’re infected.Sick patients who struggle to obtain an at-home test or have to wait days for a laboratory result might find themselves ineligible for time-sensitive but life-saving interventions, Walid Gellad, a professor of medicine at the University of Pittsburgh, told me.We don’t want our limited testing supply “tied up by people who just want to know so they can visit their friends or go to the opera.”

Everyone should do what they can to free testing resources for those with symptoms.

We should also try to allocate tests based on underlying risks.The unvaccinated are, overall, most in danger of being hospitalized and dying from the virus, so they are also, overall, the people who benefit the most from having those around them screened for infection.Social bubbles being what they are, I suspect that many people with arsenals of at-home tests spend much of their personal time around other vaccinated and relatively low-risk individuals, making the public-health benefits of their personal screening programs marginal at best.

Two major categories of people remain at serious risk of dying from COVID despite vaccination: the elderly and immunocompromised .Older people and those with severe immune-system deficiencies will quite reasonably take extra precautions while socializing—including asking their close contacts to make prodigious use of rapid tests.Outside of nursing homes, though, there has been little effort in the U.S.

to prioritize diagnostic access for these groups.Instead, we face an awkward situation where many universities are performing thousands of tests a day on young, vaccinated, and largely healthy student populations while high-risk individuals and their caregivers struggle to keep up with surveillance.

Well-heeled companies like Google are even sending employees —many of whom are still working from home—some of the most sophisticated COVID-detection tools on the market.“The worried, wealthy well are doing lots of tests of uncertain value,” the epidemiologist Daniel Morgan of the University of Maryland told me, while “the turnaround time is blowing up for higher-value uses.”

It’s true that testing low-risk people can break infection chains that eventually reach the more vulnerable, but this will be of little consolation to susceptible community members who can’t even ensure that their direct contacts have been cleared of infection.In short, you might consider testing your kids before they visit Grandma, but checking them after every fleeting or outdoor interaction with someone who may have been infected offers marginal benefit.And if we really want to be serious about test equity, universities and corporations should donate their diagnostic capacity to nursing homes and caregivers of high-risk individuals.

Health-care providers, schools, and employers might also forgo asking for PCR confirmation when someone has already proved positive by rapid test, at least while infections are so rampant.

Public-health experts could be leading this charge and modeling diagnostic thriftiness.Instead, many have modeled something else entirely, using social media to display their own extravagant consumption.I’ve watched my doctor colleagues tweet out photos of their private stockpiles of rapid antigen tests, allowing them to check their families daily while on vacation.Medical influencers have noble motives for sharing their aggressive COVID surveillance strategies, but given the dearth of supplies, their messaging comes off as far less useful than they think.

“There are 2 pandemics: one 4 the wealthy & one 4 the poor,” tweeted the physician and journalist Elisabeth Rosenthal, who admitted to being “weirded out” by these gaudy displays of test abundance.She’s right: It’s a nice idea, in theory, to show how frequent testing could be used to protect your family and community.In practice, we should be leaving tests on shelves for other people.

I will admit to being as self-interested as any other human.Despite recognizing the need for vaccine and test equity, I received three Pfizer shots as soon as I was eligible, and I’ve kept a stash of rapid-detection kits in my closet.But my own cognitive dissonance, and that of other privileged people, has become untenable in the face of Omicron’s case surge.

Given the reality of our testing shortages, it’s time we started cutting back, where and when we can..

Tue Jan 4 , 2022
On the first trading day of 2022, Apple marked a new milestone: it became the first U.S.company to reach a market value of $3 trillion. Apple’s shares briefly touched a record $182.88 per share in Monday’s trading.At that price, the iPhone maker’s value topped $3 trillion.In early afternoon trading, the […] 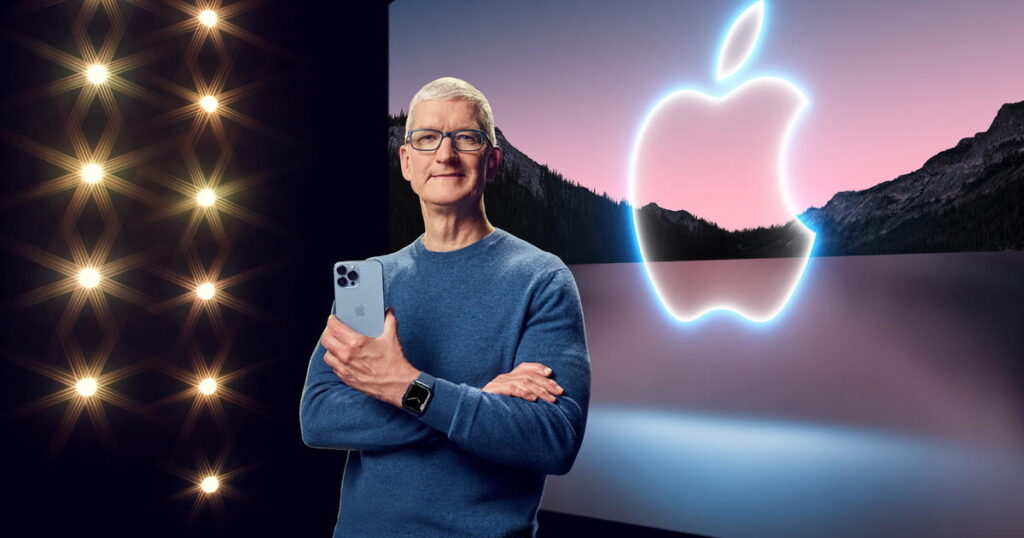