Less than a week into the new year, a 27-year-old truck driver from Connecticut might have given Robinhood a whole new thing to be worried about in 2022.On January 6, an arbitrator for the Financial Industry Regulatory Authority ruled that the zero-commission trading platform was liable for $29,460.77 in compensatory damages to Jose Batista, a retail investor who filed a complaint with the industry self-regulator in May, alleging that he had suffered significant investment losses due to Robinhood’s decision to restrict trading on certain meme stocks at the height of January 2021’s manic short squeeze.The judgment is the first of its kind to end with Robinhood paying money to a retail investor stemming from its trading restrictions, and could provide a blueprint for other individual traders hoping to get relief from Robinhood.For starters, Batista’s case against the $13 billion online broker was narrow and specific, choosing to focus on how the restrictions impacted his shares in headphone maker Koss and fashion brand Express Inc.as opposed to his whole portfolio.“I remember that day, it was life-changing for me,” recounted Batista in an interview with MarketWatch.“I was just day-trading, just trying to catch momentum.” Batista said he also was trading in big meme names like GameStop at the time, but had no intention of selling those, even though he’d become willing to offload shares that he viewed might have peaked.

“My plan was to sell Koss and Express that day,” said Batista.

“I had a lot, but no one could buy it.” On January 27, the day before Robinhood and other online brokers imposed trading restrictions, Koss closed at $58 a share, and Express closed at $9.55.Batista, who had access only to a Robinhood account at the time, grew increasingly desperate to trade his shares in some frothy meme stocks, fully aware that investors most eager to buy them at a premium simply could not.“They basically left me with no other option,” Batista said of Robinhood.“They were saying ‘You’re just stuck.If you want to sell it.Sell it.’” On February 1, the day Robinhood reopened trading on memes, Koss closed at $35 and Express closed at $5.“It was tough to watch,” Batista reflected.Unlike seven other retail investors who have taken their grievances to the regulator so far, Finra agreed that Batista’s experience was too rough to be totally fair.

The Connecticut-based public arbitrator, John James McGovern Jr., wrote in his finding that Robinhood’s two divisions, Robinhood Markets and Robinhood Financial, were “jointly and severally liable” for Batista’s losses.For Batista’s lawyer, Jorge Altamirano, the cash award has a larger significance; showing retail investors the correct way to take Robinhood to task.“There was a lot of noise about all of the conspiracy theories,” Altamirano explained, referring to various civil suits that attempted to prove Robinhood colluded with its prime market maker, Citadel Securities , to restrict trading and protect hedge funds shorting meme stocks.The Securities and Exchange Commission investigated such allegations and found them lacking proof.In keeping with their narrow approach, Altamirano and Batista did not engage with conspiracy theories about the trading restrictions and stuck entirely to the details of Batista’s case.“Finra showed here that they were willing to adjudicate a case on the merits,” said Altamirano.“This opens the door for other investors to revisit that day [in January] and maybe take action.” The idea that Batista’s $30K could turn into something larger — like a flurry of awards for damages that take a chunk out of Robinhood’s legal citadel — may be an exciting one for the legion of “Apes” still furious about January 2021, but at least one expert is taking a more measured view of the situation.“There’s no precedential value to this award, and Finra tends to go all over the place on these kinds of arbitrations,” cautioned Francis Curran, a securities litigation attorney at Kudman Trachten Aloe & Posner.

Even so, Curran did see how a Finra arbitrator might have been compelled by the specificity of Batista’s claim, and that Robinhood, which Finra already fined multiple times, including with a record $70 million penalty in June 2021 , hurt the kind of unsophisticated trader it was designed to attract, including when it helped fuel and then pulled the plug on the meme-stock short-squeeze.

“I think it’s too soon to tell if it’s the first of a trend,” Curran said.“But it’s certainly got to catch Robinhood’s attention.” And that attention already has become a little scattered in recent months.Robinhood, which declined to comment on this story, has faced a plunging stock price since its July IPO, increased competition, and persistent concerns that the SEC might change the rules around payment for order flow in 2022, threatening a large part of its business model.One signal of how 2022 is shaping up might be a deeper look at Batista himself.While $30K might seem like a paltry sum to Robinhood, it’s real money to Batista, who said it will go a long way to help support his young family, in addition to his trucking income, while he also continues to invest in the market.“I’m definitely going to continue to trade,” said Batista, who maintains a vestigial Robinhood account but now mostly trades on a competing app, Webull.“These aren’t meme stocks to me.

I just watch the momentum.I’ll take 10 stocks and watch throughout the day.” Like the markets, both GameStop and AMC Entertainment bounced back from huge drops in early trading, but with very different results.While AMC managed to mostly undo a 7.4% morning drop to close down 0.9% on Monday, GameStop had to reverse a 14.2% morning plummet and finished the session down 6.7%.It was the same story for most memes on the day, except for the MAGA meme crowd.

Shares in so-called “Trump SPAC” Digital World Acquisition Corp climbed 3.6% on the day, riding a huge afternoon bounce for the Nasdaq and the…unique investment thesis of its backers..

Wed Jan 12 , 2022
Republicans on Tuesday issued a stark warning to President Joe Biden and Senate Democrats: change the Senate rules at your peril. Mr.Biden on Tuesday endorsed changes to the Senate filibuster , the rule that requires 60 votes to advance legislation, so that just a simple majority of votes would be […] 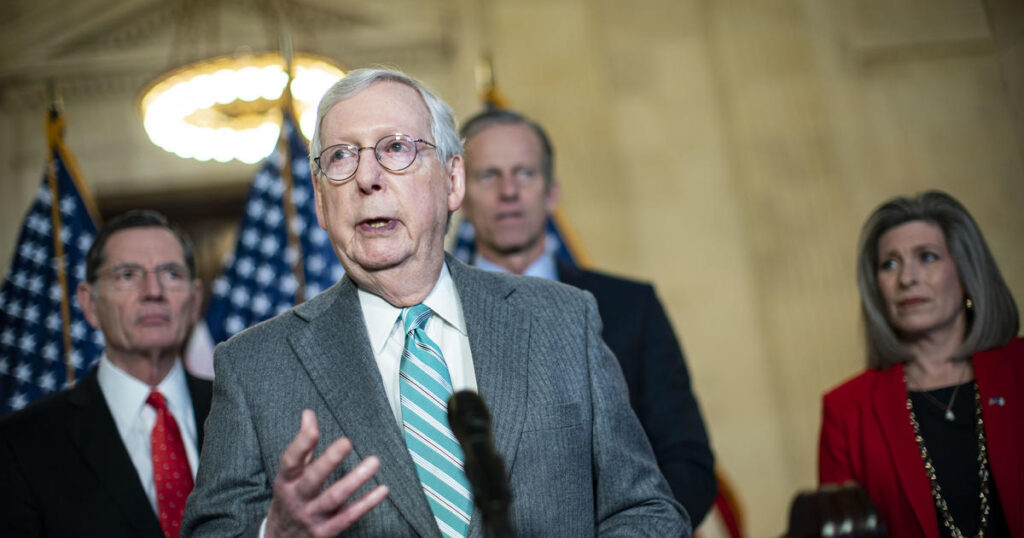