The scramble for cheap pizza will cost you $1.50 now, not just a buck.Eric Savage/Getty Images

The economy is rebounding quickly, but Americans are paying the price.Massive demand has crashed into limited supply, leading businesses to hike prices at the fastest rate in decades.The Biden administration and the Federal Reserve expected the elevated inflation to quickly fade, but as the supply-chain crisis persists, prices continue to surge higher.

Year-over-year inflation of 5% might not sound like much, but it means the difference between a $1 bargain and a less-compelling deal.

Here are four cheap buys that inflation has killed for good.

The last remaining major dollar store chain in the US to stand by the $1 commitment, Dollar Tree just officially raised prices to $1.25 this month .

After years of investor pressure , the discount chain finally buckled under rising supply chain and labor costs.The new price point will enable it to absorb these costs and bring profit margins back to historic levels, company execs said.

It’s also leaning into its Dollar Tree Plus collection, an assortment of items that cost between $3 and $5, which will be rolled out to 5,000 stores within the next two years.

The Charles Shaw brand rose to fame for its initial $2 price tag, which led to its colloquial nickname of “two-buck Chuck.” Yet finding a bottle for $2 is harder than ever.

The grocery chain first hiked prices in 2013 to $2.49, denting the wine brand’s reputation but not quite killing the moniker.Yet price growth since has led to some locations selling bottles for as much as $3.99, according to Food & Wine .

The uptick isn’t even across the US.

Trader Joe’s announced in early 2020 it would lower the price of some Charles Shaw wines in California back to $1.99 by changing the glass bottle and cork design.

Yet other regions were still stuck with the higher price tag, and some California residents have since complained online that prices have rebounded from $2 .Others said that, while the wine retains its $2-per-bottle price, the deal is only available when buying an entire case.

Many of New York’s low-price pizzerias have ditched the $1 benchmark for higher prices amid pandemic-era inflation, The New York Post reported earlier in November.Rising costs for garlic, flour, and even the gas used to power pizza ovens have killed the dollar slice.

“I can list about 200 items that I’m buying for my store every week and every one of them went up 50% to 200%,” Leonardo Giordano, president of Mona Lisa Pizzeria and Ristorante in New York, said in a November Facebook comment.

The damage isn’t too bad for New Yorkers.Many restaurants only hiked their per-slice prices to $1.50, still undercutting most upmarket competitors.But with inflation still trending at historic highs, its unlikely anyone will be able to trade a $1 bill for a New York slice anytime soon.

Little Caesar’s just announced that its classic $5 Hot-N-Ready pizza will no longer cost $5.The chain’s staple will now sell for $5.55, an 11% price increase and the first in 25 years.

The pizza chain is promoting the news as an even better deal.”Change is good when it comes to giving our customers more of what they love,” chief marketing officer Jeff Klein, said in a statement “And we’re changing our iconic HOT-N-READY Classic, adding 33% more savory, meaty pepperoni still at the country’s most affordable price”

Along with the price increase, the new version will also come with 33% more pepperoni, Little Caesar’s says.

The new price will be available for a limited time, and then it could cost more based on location.

At $5.55, Little Caesar’s is still affordable compared to competitors.A similar large pepperoni pizza at Domino’s or Pizza Hut costs between $13 and $16, depending on location.

Fri Jan 7 , 2022
The number of Americans applying for unemployment benefits edged up last week, but claims remains near a 50-year low amid a tight labor market that is spurring businesses to hold onto their workers. About 207,000 people filed for first-time unemployment benefits in the week ended January 1, the Labor Department […] 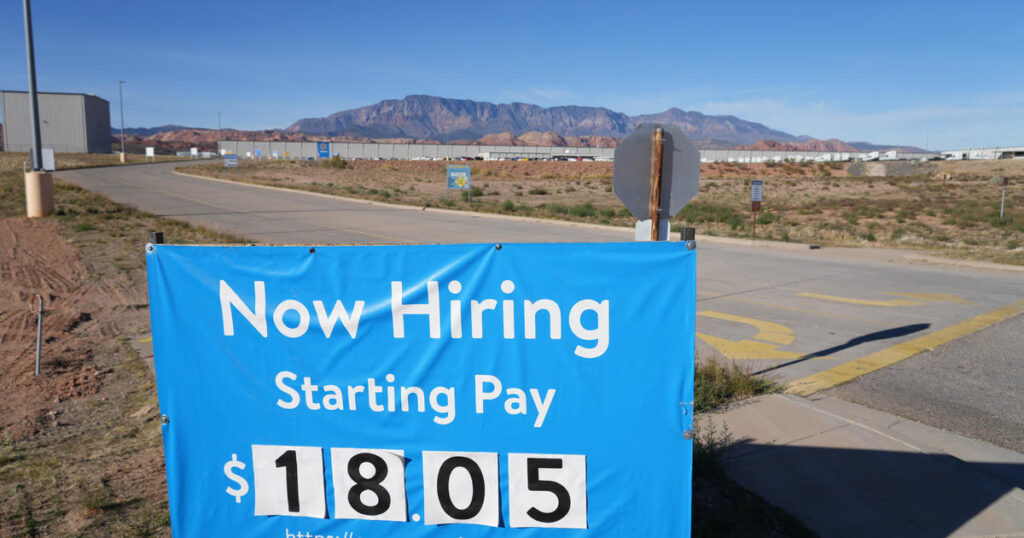