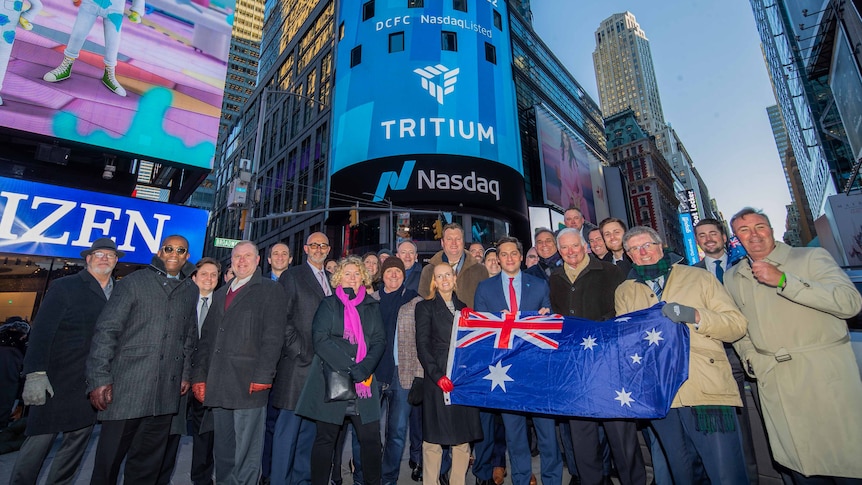 It was a White House announcement that came complete with stars, stripes and the US President in a sharp black suit: an Australian company was building a factory in Tennessee.The beginning of an “American manufacturing comeback”, Joe Biden told reporters on February 8, standing beside the Australian CEO in a rare show of support for a private company.And what was the company at the centre of this announcement? Who had won the ear of the US President? Tritium.Back in Australia, the news created only a sluggish ripple of interest.Tritium? Who the hell is Tritium? As it turns out, Tritium could be the most important Australian company most Australians have never heard of — an example of a successful homegrown business that’s exporting a high-tech clean-energy product, rather than shiploads of ore, sheep or gas.Founded by three engineering graduates in Brisbane, it’s quietly secured a large chunk of the global EV-charger market.

If you ever use an EV in Australia, you’ll probably use a Tritium charger.The story of where it came from begins in 1999, with a solar-powered car racing from Sydney to Melbourne.

Built by UQ students, the SunShark was one of the world’s top solar racers.Teardrop-shaped and three-wheeled, it operated on the power of a two-slice toaster, and could race for thousands of kilometres with a top speed just below the highway’s legal limit.In 1999, it took third place at the World Solar Challenge.David Finn was in charge of designing the car’s electronics.”When I finished my undergraduate degree in 2000, I thought, ‘There’s all this tech that the solar car teams around the world are wanting to buy,'” he says.”It was a bit of a cottage industry to start with.We just started selling.” In 2001, he and two other members of the SunShark Team, Paul Sernia and James Kennedy, founded Tritium, a tiny company operating out of a shed in the south Brisbane suburb of Tennyson.”We became the biggest supplier to the smallest industry in the world,” says Dr Finn, who has a PhD in electrical engineering.

“About 80 per cent of the the world’s solar racing cars were running our motor controller technology.” For the next decade or so, they plugged away in specialised systems, but kept their eye on a bigger prize: mass-market vehicles.In 2008, Tesla built its first Roadster sports car, which was the first all-electric production car to travel more than 320km per charge.The battery technology that would disrupt the car industry and spell the end for the internal-combustion engine was slowly taking shape, but the big car makers weren’t listening.”This whole time we’re trying to commercialise the 120kW motor inverter for use in vehicles,” Dr Finn says.

“But we were three or four guys in Brisbane, trying to sell to the BMWs of the world.”It was a challenge that was a little bit insurmountable.” Then, in 2012, after years of hard grind, their luck changed.The company’s 93rd product (with the first being the solar car motor controllers) proved to be a winner.Alan Finkel, who would later become Australia’s Chief Scientist, was working for a Californian EV charging startup.He asked Tritium to make a DC fast charger.

DC chargers take the AC (alternating current) mains electricity and convert it to DC (direct current), which is the type of power that EV batteries use.In general, AC chargers are the little boxes many EV owners have in their garages, and DC chargers are the larger, much faster ones for public use.”He said, ‘I’ve looked around the world, I can’t find any DC chargers that I really like,'” Dr Finn says.”Three months later, we had a prototype up and running.” Tritium had got into making EV chargers at just the right time.The promise of EVs, which had spluttered along since at least the 1970s, finally roared to life around 2012, and with them came a need for safe, quick and robust charging systems.From nowhere, an entire industry sprang into existence.”It was a little bit Wild West,” Dr Finn says.

From 2012 to 2020, global EV sales grew at about 50 per cent each year.In some countries, like Norway, the increase was even steeper, with EVs dominating new car sales by the end of the decade.”We did well in Norway,” Dr Finn says.

“In the Christmas of 2014, I was sent our first purchase order for 50 [EV chargers], as a Christmas present.” Tritium has now sold more than 6,700 chargers to 41 countries and is the world’s second-largest fast-charging company.It has about 20 per cent of the European charging market, 16 per cent of the US, and 75 per cent of Australia and New Zealand.For Mr Finn, the rise of EVs hasn’t been a surprise.Knee-deep in solar-car electronics in 2008, he and others could see the potential — the problem was that not enough other people could.”People say, ‘Isn’t it so amazing what’s happened?’ And I’m like, ‘I can’t believe it’s taken so long.'” “That was one of the biggest challenges — I probably underestimated the inertia of the automotive industry.” Not quite, says Jane Hunter, who was appointed CEO of Tritium in 2020.

“We kind of like to describe ourselves as the picks and shovels to the gold rush,” she says.From 2022-26, Tritium estimates, all these new electric cars, buses and trucks (outside China) will need 120 billion kWh worth of charging.Tritium’s projected revenue for that period is $US12 billion.Unlike petrol companies, its customers are not just service stations, but anywhere with the space to host a charger, from burger franchises to shopping centres to local councils.

Late last year, Hungry Jacks installed an EV charger in Victoria.The maker? Tritium.That same month, in November, Ms Hunter told an Australian business conference that fuel retailers would soon face their own “Kodak moment” — a reference to the camera-film giant that went bankrupt with the switch to digital cameras.The comments caused a stir, with fuel retailers bristling at the idea chargers would kill the bowser.

Ms Hunter says the change is coming, whether they like it or not.Car makers from Volvo to Toyota are rapidly phasing out petrol and diesel models and governments are tightening emissions regulations.”Everyone believes that [the shift to EVs] might come, or might not come, whereas we’re out there saying, ‘It’s already happened.’ “Whatever you might decide you want to do, the decision has been made without you.It’s been made by the vehicle manufacturers and the other governments.” As Tritium has grown, Australia’s EV sales have mostly stagnated.During the 2019 federal election, when Tritium’s Brisbane factory was filling EV-charger orders from all over the world, Prime Minister Scott Morrison was campaigning against policies to promote EVs, saying they could not tow a boat and would “end the weekend”.The government’s EV strategy, released in November last year , pledged extra money for charging stations, but was criticised by industry groups for not including purchase incentives to boost sales.

Australia’s EV uptake is lower than in the US, the UK and most European countries, which have generous purchase incentives.

Our 2030 sales target (30 per cent of new car sales) is also less ambitious.Australia’s low uptake relative to other countries begs the question: Will it be left behind in the shift to EVs? The success of Tritium shows there are economic opportunities in being first and getting ahead of the competition.That’s the reason why, on February 8, Mr Biden appeared alongside Ms Hunter to celebrate the announcement of a Tennessee EV charger factory and the creation of 500 local jobs.”The benefits are going to ripple through thousands of miles in every direction and these jobs will multiply,” Mr Biden said.Up to now, most of Tritium’s chargers have been made in Australia.

The US factory will change this — it has at least three times the capacity of the Brisbane plant.There are no plans to build another Australian factory, Ms Hunter says.”If the Asia-Pacific took off, we would go and take a larger facility immediately.”Australia has the best sources of wind and solar renewable energy globally …[and] Australian engineers are top-tier.”I would hate for us to squander the opportunity that we’ve got.

“I don’t think the opportunity is missed yet.But I do think it could be missed.”.

Risk of Covid has reduced but world will see another pandemic, says Bill Gates

Sun Feb 20 , 2022
Billionaire philanthropist Bill Gates has said that COVID-19 risks have reduced but it is almost certain that the world will see another pandemic, CNBC reported.Bill Gates told the news channel that large parts of the global population have achieved a certain level of protection against coronavirus.He added that with the […] 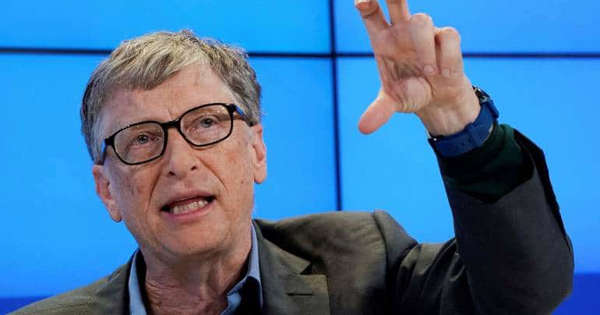