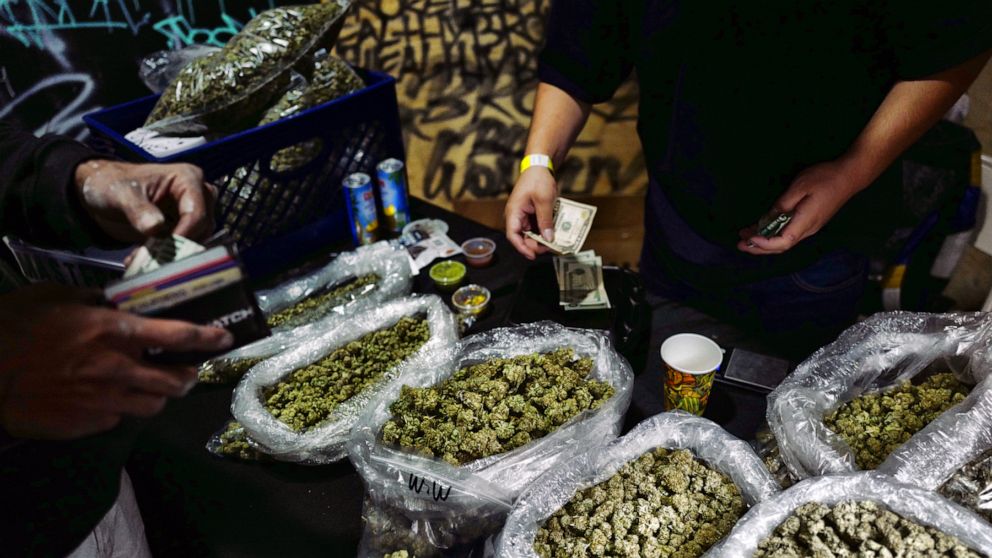 Double dealing: Legal, illicit blur in California pot market As California enters its fifth year of broad legal marijuana sales, industry insiders say the practice of working simultaneously in the legal and illicit markets is all too commonplace in the struggling pot economy

The Associated Press FILE – In this April 15, 2019, file photo, a vendor makes change for a marijuana customer at a cannabis marketplace in Los Angeles.An unwelcome trend is emerging in California, as the nation’s most populous state enters its fifth year of broad legal marijuana sales.Industry experts say a growing number of license holders are secretly operating in the illegal market — working both sides of the economy to make ends meet.(AP Photo/Richard Vogel, File) LOS ANGELES — On an isolated farm, greenhouses stand in regimental order, sheltered by a fringe of trees.Inside are hundreds of head-high cannabis plants in precise rows, each rising from a pot nourished by coils of irrigation tubing.Lights powerful enough to turn night into day blaze overhead.

In the five years since California voters approved a broad legal marketplace for marijuana, thousands of greenhouses have sprouted across the state.

But these, under their plastic canopies, conceal a secret.

The cultivator who operates the grow north of Sacramento holds a coveted state-issued license, permitting the business to produce and sell its plants.

But it’s been virtually impossible for the grower to turn a profit in a struggling legal industry where wholesale prices for cannabis buds have plunged as much as 70% from a year ago, taxes approach 50% in some areas and customers find far better deals in the thriving underground marketplace.

So the company has two identities — one legal, the other illicit.

“We basically subsidize our white market with our black market,” said the cultivator, who agreed to speak with The Associated Press only on condition of anonymity to avoid possible prosecution.

Industry insiders say the practice of working simultaneously in the legal and illicit markets is all too commonplace, a financial reality brought on by the difficulties and costs of doing business with a product they call the most heavily regulated in America.

For the California grower, the furtive illegal sales happen informally, often with a friend within the tight-knit cannabis community calling to make a buy.The state requires legal businesses to report what they grow and ship, and it’s entered into a vast computerized tracking system — known as “seed to sale” monitoring — that’s far from airtight.

“It’s not too hard” to operate outside the tracking system’s guardrails, the grower said.Plants can vary widely in what each one produces, allowing for wiggle room in what gets reported, while there is little in the way of on-site inspections to verify record-keeping.The system is so loose, some legal farms move as much as 90% of their product into the illicit market, the grower added.

The passage of Proposition 64 in 2016 was seen as a watershed moment in the push to legitimize and tax California’s multibillion-dollar marijuana industry.In 2018, when retail outlets could open, California became the world’s largest legal marketplace and another steppingstone in what advocates hoped would be a path to federal legalization, after groundbreaking laws in Colorado and Washington state were enacted in 2012.

Today, most Americans live in states with at least some access to legal legal marijuana — 18 states have broad legal sales for those 21 and older, similar to alcohol laws, while more than two-thirds of states provide access through medicinal programs.

Kristi Knoblich Palmer, co-founder of top edibles brand KIVA Confections, lamented that the migration of business into the illegal market was damaging the effort to establish a stable, consumer-friendly marketplace.

“To have this system that now appears to be failing, having people go back into the old-school way of doing things …it does not help us get to our goal of professionalizing cannabis and normalizing cannabis,” she said.

In California, no one disputes the vast illegal marketplace continues to dwarf the legal one, even though the 2016 law stated boldly that it would “incapacitate the black market.” Democratic Gov.

Gavin Newsom, who was lieutenant governor at the time the law was approved, called it a “game changer.”

But California’s legalization push faced challenges from the start.The state’s illegal market had flourished for decades, anchored in the storied “Emerald Triangle” in the northern end of the state.Not since the end of Prohibition in 1933 had an attempt been made to reshape such a vast illegal economy into a legal one.

In October, California law enforcement officials announced the destruction of over 1 million illegal plants statewide but said they were finding larger illicit growing operations.In the cannabis heartland of Humboldt County, many illegal growers are moving indoors to avoid detection.Investigators are making arrests and serving search warrants every week, but with so many underground grows “we may never eliminate the illegal cultivation,” Sheriff William Honsal said in an email to the AP.

In September, a cannabis company sued government regulators in state court in Orange County, alleging so-called burner distributors were using shadowy “front men” to get licenses to buy wholesale cannabis, then selling it in the illegal market to sidestep taxes.

No state is claiming to have eliminated illegal operators.U.S.

Rep.Earl Blumenauer, an Oregon Democrat who co-chairs the Congressional Cannabis Caucus, said he saw little prospect for undercutting illegal markets without federal legalization, which has been stalled in Congress despite having Democrats in control of Congress and the White House.

The thriving illegal markets in California, Oregon and elsewhere are a “product of the dysfunction, the lack of resources and the fact that we don’t have a national market that is regulated,” he said.

Like the California cultivator, many businesses do some transactions in the illicit market to help make ends meet, but others have given up on the legal economy or never bothered to enter it.

While California’s legal market tightly controls how and where pot is sold, the illegal industry is easy to access and offers a doorway into a vast and profitable national market.

California’s effort to establish itself as the preeminent player in the legal cannabis economy has never felt more imperiled, and talk is spreading of a Boston Tea Party-like rebellion against state policies.In a December letter to Newsom, about two dozen industry executives said the state was crippling the marijuana economy.

“The California cannabis system is a nation-wide mockery, a public policy lesson in what not to do,” the business leaders wrote.Newsom has signaled he’s open to change.

The anonymous grower said the burden of competing in the regulated economy simply doesn’t make sense to many longtime operators who came up in the pre-Proposition 64 marketplace.There is a widespread mindset — “Why bother?” — when the illegal economy is booming and there is little law enforcement to fear.

In Los Angeles, for example, opening a retail operation can cost $1 million or more with licensing fees, real estate costs, attorneys and inspections — if you can get a license at all.Promises of social equity programs that would assist businesses run by people of color who were targeted during the war on drugs have gotten off to an uneven start.

For the struggling legal market, “when you have quality, price and convenience working against you, that’s a challenge,” said Adams, the cannabis analyst.

“The illicit market has all three of them.”

An irony in the legal market is that wholesale prices have plummeted, shaking the supply chain.A year ago, a cultivator could get about $1,000 a pound wholesale.Now that’s dropped as low as $300, with the market saturated.

Part of the problem for the industry is about two-thirds of California cities do not allow legal sales or growing — local governments control when, or if, to create legal markets, and many have banned it or failed to set up rules.Even in places that do, cities have been slow to permit storefronts to sell legal products, with less than 1,000 brick-and-mortar shops in a state with nearly 40 million people.

Meanwhile, wholesale prices for buds in the underground are significantly higher.

The legal market, with limited outlets to sell it, is flooded with pot from corporate-scale growers.

“No one is making money anywhere in the (legal) supply chain,” he said, noting his own sales have nosedived.Kiloh sees few bright spots in the law that established California’s legal market, beyond a testing program that safeguards quality and programs to expunge old criminal records for marijuana.

Tue Jan 18 , 2022
A version of this story appeared in CNN’s Meanwhile in China newsletter, a three-times-a-week update exploring what you need to know about the country’s rise and how it impacts the world.Sign up here. Hong Kong (CNN Business) China’s birth rate plummeted for a fifth consecutive year to hit a new […]