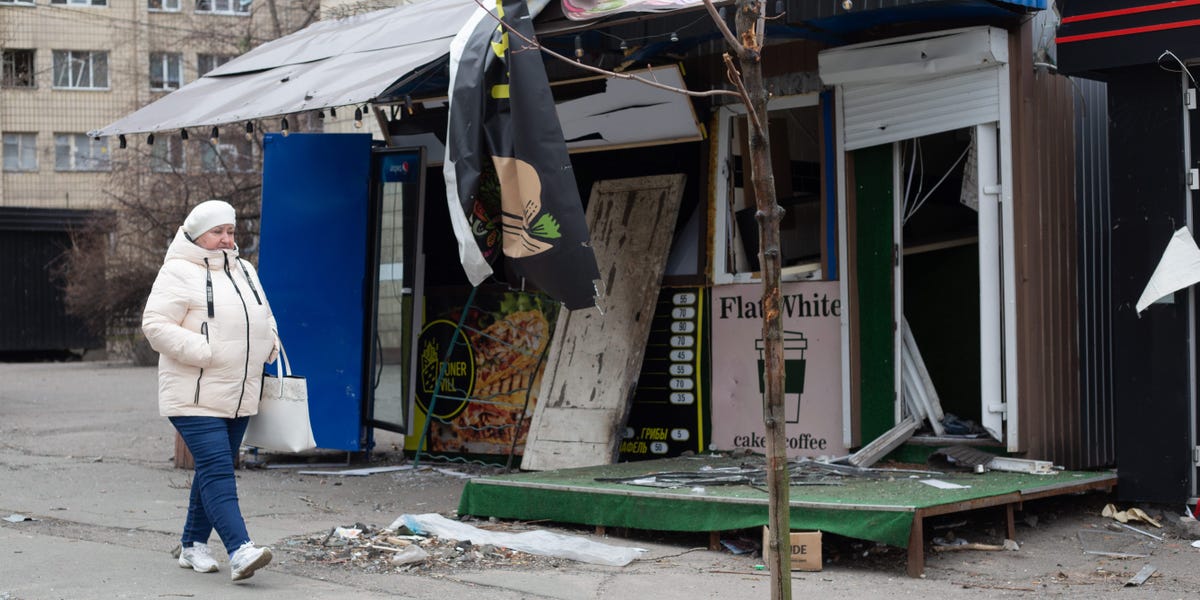 Ukraine’s economy is set to shrink 45% this year, while Russia’s will contract 11%, the World Bank has said.In its spring report, the institution said the “catastrophic” war would cause over $100 billion of damage to Ukrainian infrastructure.It also said the conflict would hit the Eastern European economy hard, and risked a major slowdown in global growth.Sign up for our weekday newsletter, packed with original analysis, news, and trends — delivered right The “catastrophic” war in Ukraine will cause the country’s economy to shrink 45% this year and Russia’s to contract 11%, the World Bank has predicted.

Russia’s invasion has destroyed infrastructure across Ukraine and led to severe shortages of water, food, heating, and energy, the international financial institution said on Sunday in a new report.

It estimated that the damage to infrastructure was likely to be well above $100 billion, or about two-thirds of Ukrainian gross domestic product in 2019.Half of Ukrainian businesses have shut, while the other half are operating well below capacity, it said.

The World Bank said Ukrainian GDP — the most common measure of the size of an economy — would likely shrink by 45.1% in 2022.However, it said the forecast was highly uncertain, and could be higher if the war drags on for longer, or lower if the conflict ends soon.

“Russia’s invasion of Ukraine has triggered a catastrophic humanitarian toll and severe economic contraction,” the World Bank said in its spring report.

“Ukraine needs massive financial support immediately as it struggles to keep its economy going and the government running to support Ukrainian citizens who are suffering and coping with an extreme situation.”

Russia’s war will also severely damage the country’s domestic economy, the World Bank said.It said the economy has already plunged into a deep recession , and predicted GDP would contract by 11.2% in 2022.

The World Bank said Western sanctions on Russia would do much of the damage.The US and its allies have cut Russia’s central bank off from the bulk of its foreign currency reserves; sanctioned banks, companies and oligarchs; and curtailed trade with the country.

The World Bank also said the economies of countries around Ukraine and Russia would be hit hard, while the war could trigger a sharp global slowdown.

The conflict has triggered a sharp rise in food and energy prices , which is likely to be particularly destabilizing for developing economies, the report said.

Read more: 8 investing experts share their markets outlook for the French election — including how a shock Marine Le Pen win could impact stocks and bonds

The Wall Street Journal: Russia’s brain drain: Hundreds of thousands of professionals and ...

Tue Apr 12 , 2022
Hundreds of thousands of professional workers, many of them young, have left Russia since its invasion of Ukraine , accelerating an exodus of business talent and further threatening an economy targeted by Western sanctions. See: Russia’s economy has adjusted to sanctions.That doesn’t mean Moscow is winning the financial war. Also […]