In early 2017, Ukrainian forces battling Russia-backed separatists shot down a drone conducting surveillance over Ukraine’s eastern flank.The unmanned aircraft — nearly six-feet long, with a cone-shaped nose and a shiny gray body — had all the external characteristics of a Russian military drone.But when researchers cracked it open, they found electronic components manufactured by a half-dozen Western companies.Get the full experience.Choose your plan ArrowRight

The engine came from a German company that supplies model-airplane hobbyists.Computer chips for navigation and wireless communication were made by U.S.suppliers.A British company provided a motion-sensing chip.

Other parts came from Switzerland and South Korea.“I was surprised when we looked at it all together to see the variety of different countries that had produced all these components,” said Damien Spleeters, an investigator with the U.K.-based Conflict Armament Research (CAR) group, who traveled to Ukraine to dissect several drones.All were loaded with Western electronics.Without those parts, said Spleeters, who summarized his findings in a report funded by the European Union and Germany, Russia would have found it “much more difficult to produce and operate the drones, for sure.”As tensions mount over a possible Russian invasion of Ukraine, U.S.officials are considering trade sanctions designed to deprive Russia of foreign-made computer chips and electronics.Spleeters’s investigation shows how profoundly the ban could hurt Russia’s military — and why it might be hard to pull off.Russia is known for its scientists and hackers but makes little of its own electronics or computer hardware, relying largely on imports.Yet blocking the flow of these goods could prove difficult.Some of the drone components that CAR identified traveled to Russia via obscure middlemen and small trading companies whose businesses could be tough to track.What’s more, the relatively small quantities that Russia’s military is likely to need might allow it to acquire components surreptitiously, said Malcolm Penn, the chief executive of London-based semiconductor research firm Future Horizons.“If you only want 500 or 1,000 it’s easily doable, and very hard to stop,” he said.

“All throughout the Cold War, when in theory there were no exports to the Soviet Union, that didn’t stop them from getting things.There are always men with suitcases that go out to the Far East and buy stuff and come back.”Another big wild card is China, which could thwart any U.S.attempt to choke off chips to Russia.CAR estimated that the drones it examined were built between 2013 and 2016, when Western suppliers were more dominant in the chip industry.China has since become a much bigger manufacturer of electronic components, and is unlikely to fully comply with any attempted blockade, technology experts said.Russia relies on Asian and Western countries to supply most of its consumer electronics and computer chips, which are the brains that make electronics function.Russia’s imports of these goods in 2020 exceeded $38 billion, according to United Nations trade data.The Soviet Union had a variety of small semiconductor factories churning out chips, mostly for military use, according to Penn, who visited some of the facilities in the early 1990s.

But the Soviet breakup pushed Russia into a long period of turmoil that thwarted development of high-tech industries and manufacturing.“The microelectronics industry was completely decimated in the 1990s,” said Sam Bendett, a Russian-military analyst at the Virginia-based research group CNA.“It was just easier to import these technologies, which were widely available in the global market.”The Russian and Ukrainian embassies in Washington didn’t respond to requests for comment.Russia retains some manufacturers that produce chips of older designs, including Mikron , which was founded in Soviet times near Moscow.Enterprises in the country also design chips known by the names Baikal and Elbrus — the latter are used by the military — but send many of the designs to Taiwan Semiconductor Manufacturing Company, the world’s largest chip foundry, for fabrication.Russian defense contractors in recent years have claimed to have revived some domestic manufacturing of high-tech military equipment, including drones and their components, Bendett said.The United States and the European Union already restrict their exports of defense-related electronics to Russia and have toughened those rules in recent years.Yet Russian networks have found ways around those obstacles.In 2015, several Russian agents were convicted of, or pleaded guilty to , federal charges of using a Texas-based company they set up to illegally export high-tech chips to Russian military and intelligence agencies.Under the broader blockade that U.S.officials are considering, the United States could compel many countries worldwide to cut their chip exports to Russia by telling them they aren’t allowed to use U.S.

Most chip factories worldwide, including those in China and Taiwan, use U.S.manufacturing tools or software in their production process, analysts said.The United States could limit the ban to Russia’s military and high-tech sectors or could apply it more broadly, potentially depriving Russian citizens of some smartphones, tablets and video game consoles, The Washington Post recently reported , citing administration officials.CAR determined that the drones it investigated were used for reconnaissance missions in eastern Ukraine, where Russia has been fueling a separatist war since 2014.At the invitation of Ukraine’s security services, Spleeters from CAR flew to Kyiv in late 2018 to dissect the drone that was shot down in 2017.Using a duffel bag stuffed with screwdrivers, Allen keys and cameras, Spleeters disassembled and photographed the aircraft, looking for serial numbers and markings that could help identify where the parts came from.He and his colleagues then contacted the component suppliers to try to trace how the parts wound up in the drone.One motion-sensing chip was manufactured by the British company Silicon Sensing Systems , which makes components for drones, car navigation systems and industrial machinery.The company told CAR that it sold the chip in August 2012 to a Russian civilian electronics distributor, sending it via UPS in a package with 50-odd components, according to the CAR report.The Russian distributor told Silicon Sensing that the chip was to be used in a drone; it later added that it sold the chip to a Russian entity called ANO PO KSI, which it said purchased such items for educational institutions in Russia, according to the CAR report.ANO PO KSI, which is an acronym for Professional Association of Designers of Data Processing Systems, was added to a sanctions list by the United States in 2016 for allegedly aiding Russian military intelligence.

On its website , ANO PO KSI describes itself as a nonprofit that makes high-tech products, including document scanners and cameras, for the Russian government and business customers.The organization didn’t respond to a request for comment.In an email to The Post, Silicon Sensing said it “vigorously” complies “with all export control laws and policies everywhere we do business.”“These components were sold in 2012 to a commercial company that was not on an embargo list at that time.We have ceased doing business with that company and any related entities,” Silicon Sensing added.The drone also contained U.S.-made components designed for navigation and wireless communication.One of the suppliers, Digi International, based in Hopkins, Minn., told CAR that it sold the wireless communications component to a U.S.-based distributor in March 2012, but that the distributor was unable to identify the ultimate recipient, according to the CAR report.Digi International told The Post that it screens all sales to be sure it isn’t supplying any prohibited parties in violation of U.S.export control laws.“We do not know how the product in question ended up in a Russian drone.We do not condone the use of our modules by foreign actors in military use cases,” the company said in an emailed statement.Maxim Integrated, of San Jose, Calif., told CAR that it manufactured a navigation component found in the drone in 2013 and shipped it to its distributors in January 2014.It added that the component “is not designed for use in unmanned aerial vehicles.”Maxim’s parent company, Analog Devices, declined to clarify for The Post what the component is used for.

In an emailed statement, the company said it “is committed to full compliance with U.S.laws including U.S.export controls, trade sanctions and regulations.”Other companies in Switzerland and the U.K.told CAR they were unable to track the chain of suppliers that had handled their components.The drone’s engine — a single-cylinder unit with an electronic ignition — traveled a particularly mysterious route, from a small company near Frankfurt, Germany, that makes parts for model airplanes.The company, 3W-Modellmotoren Weinhold, which didn’t respond to The Post’s request for comment, told CAR that it had sent the engine to World Logistic Group, a company based in the Czech Republic, in October 2013.The Czech company, which ceased operations in 2018, could not be reached for comment.The company was founded in the spa town of Karlovy Vary in 2008 by two residents of Moscow, according to Czech business registration documents identified by CAR and reviewed by The Post.From 2012 to 2014, a third Moscow-area resident served as a director of the company, according to those documents.

CAR researchers found that this person was also a member of an advisory council to the Main Directorate of Public Security for Moscow’s regional government.The directorate was established to “implement state policy in the field of public and economic security,” according to the website of Moscow’s regional government.According to CAR, similar drone models have been recovered after flying over Syria and Libya, countries where Russian troops or mercenaries have also engaged in military action.Lithuania, a member of NATO, discovered an identical model that crashed on its territory in 2016.That one contained foreign-made components and Russian software, according to CAR and Lithuanian security services .The case shows “that Russia uses [drones] for intelligence collection not only in conflict zones but also in peacetime in neighbouring NATO countries,” Lithuanian authorities said in a 2019 document .Natasha Abbakumova in Moscow contributed to this report..

Sat Feb 12 , 2022
Leave some for the rest of us! [Update the quantity in your cart.] Nintendo Switch with Neon Blue and Neon Red Joy‑Con Hurry only 1 left! – Standard – Estimated delivery Feb 18 – Feb 22 – Free Standard shipping for Prime members. 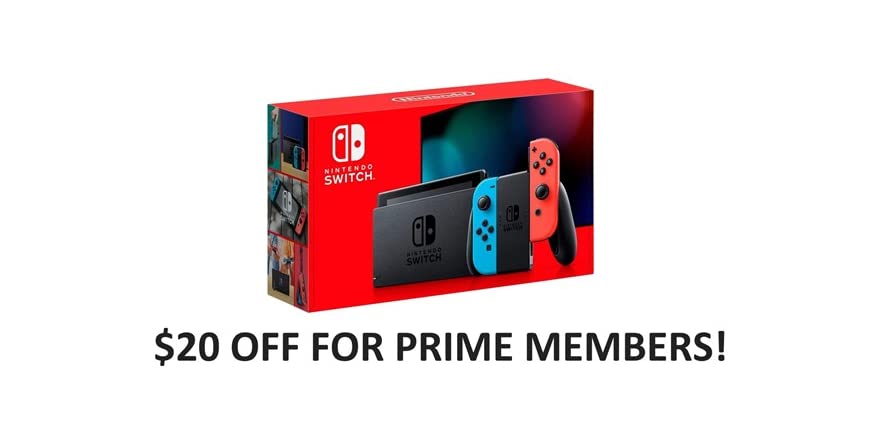