As soldiers stalk an eerily quiet European city, a young boy asks a stranger to help find his mom, while in a bombed-out building a parent gives a plush toy to his child hoping it will provide some reassurance.Get the full experience.Choose your plan ArrowRight

The images evoke scenes in Kyiv and Kharkiv as the Ukrainian cities face a growing Russian invasion.But the tableau in fact comes from “This War of Mine” — an award-winning video game from 2014 that has seen its popularity soar since Russian President Vladimir Putin’s troops descended on the country last week.The game, from Polish developer 11 Bit Studios, is helping people in Europe and beyond empathize with and even vicariously experience the feelings of everyday Ukrainians.It is one of several examples of cutting-edge immersive technologies — besides video games they include a slick reality-distortion app and virtual reality — to which a younger generation is increasingly turning to explain the war.“I think if it makes people understand what’s happening on the other side of the border, that’s all we’re trying to do,” Pawel Miechowski, head of communications for 11 Bit, said from his office in Warsaw.“This War of Mine” is rare: Unlike “Call of Duty” and other battle games, it takes the perspective not of combatants but of civilians left to absorb the collateral damage.

(“In war, not everyone is a soldier,” reads the tagline.)The immersive efforts are at present still a scrappy and fragmented undertaking.

But taken as a whole, they hint at a new and possibly more effective way to influence public opinion; such sites could even eventually become another front in the information wars.11 Bit has seen sales of the game soar 2,500 percent since the invasion began last week, Miechowski said.The company will donate all profits from sales through at least this Thursday to the Red Cross’s Ukrainian relief efforts.

In just the first four days, that profit figure totaled $715,000 — a massive sum for a game that generates just a few dollars of profit per unit and came out some eight years ago.Maybe more important, “This War of Mine” has become a kind of communal force.As Russian bombings intensified over the weekend, its title page on gamer platform Steam became an impromptu group therapy session and anger outlet.“This is for Ukrainians.Putin go to the hell,” a user named Noobly wrote.“I just heard on the news that Russia has started a war.This is what came to my mind,” said the user Littlesoda.“Of course, it cannot be compared with reality, but this game allows us to experience the horrors of war, even a little.”It also became a venue for Russian backlash.While there were overwhelmingly strong reviews on many language pages, thumbs-down takes filled the Russian-language reviews from the past week, with references to “Ukrainian fascists” and other anti-Kyiv epithets.Miechowski believes it is less a coordinated attempt than a peek into a world shielded from accurate news.The so-called social web of Twitter and Facebook is well established as a place of community, information and, of course, outrage.

But new immersive technologies hint at how we might come to connect with war in the decade ahead.If for much of the 20th century radio and television piped war’s horrors into our living rooms, and this century has seen social media posts and video clips bring them to our pockets, these new technologies will wire them directly into our minds.“There’s something about virtual reality and augmented reality that is very suited to war because VR and AR can convey war’s dilemmas like nothing else,” said Alexey Furman, a Kyiv resident.

“What do you feel when the sirens go off? What does it feel like when you have to flee?”Furman would know — he’s spent years building a kind of Ukrainian crisis metaverse .A designer and producer who studied at the University of Missouri, Furman four years ago helped create “Aftermath VR: Euromaidan,” a spare, haunting VR experience of Ukraine’s 2014 revolution overthrowing pro-Russian President Viktor Yanukovych that went on to win awards at VR festivals around the world.He recently completed a demo of a “simulator” of the country’s war in the eastern Donbas region.And in 2020, he and several partners produced “PrisonersVoice,” which re-created the journey in augmented reality of Oleg Sentsov, Oleksandr Kolchenko and Volodymyr Balukh ― three activists jailed by Russia for five years after the annexation of Crimea in 2014.Furman drew on the interviews he conducted with the three, combining their voices with images of the Russian security apparatus for a phone-based experience that is far more three-dimensional and lifelike than a traditional video.The experience is available as an app on major app stores — including, at least for the moment, in Russia.“I think it’s an effective way for people to understand what it’s like to be a victim of the Russian political system.A lot of people don’t really know what that’s like,” Furman said.Furman and his wife were in their apartment in Kyiv last week when a car was leaving for the western city of Ivano-Frankivsk, farther from the war’s likely front.He secured spots for them and set about figuring out what to take, since there was only room for each to bring one backpack.He had to leave his camera behind.They arrived in Ivano-Frankivsk after a 28-hour drive.(It normally takes seven.) Furman and his wife are now holed up in an apartment with a half-dozen friends.

During a talk with a reporter at 11 p.m.Monday, an air-raid siren went off, and he had to hang up so he could pack in with everyone else inside a windowless bathroom.“This would be very meaningful to people if they could experience it in VR,” he said when he got back on the phone a short time later after the all-clear siren had sounded.Furman said metaverse content can convey war’s difficult choices in a way social media and other traditional content could not.His mother, for instance, stayed behind in Kyiv, unwilling to leave the land she’d lived on for so many decades.Imagine, he said, looking at her and watching her stay.Or being her and watching your son go.Immersive technology is also being used as the war unfolds to convey more explicit pro-Ukraine political messages.Reface, a popular Kyiv-based app that uses AI to enable the playful prospect of putting users’ faces on the video bodies of famous people, has set about remaking its cutting-edge app as a kind of Ukrainian-war messaging tool.The company has watermarked every image of users’ face-swapping with “Stand With Ukraine” messaging; showed Kyiv war images on its start screen; and even sent push notifications to users decrying Russian aggression.The company’s founder, Dima Shvets, says reality-distorting apps like Reface are a way for users to absorb messages they might otherwise tune out.

People have their guards up with political news on those platforms, he said.But they lower them for an immersive experience like face-swapping.“To be frank, if you give people the truth on Facebook or in traditional media, they don’t always see it,” he said by phone from Kyiv, where he has begun working from home after closing the company’s newly completed offices.“But when you’re having fun playing around in this world, it reaches you in a different way.”Shvets said he believed methods like this will be increasingly necessary for a new generation of digital citizens.“Gen Z doesn’t consume media the way that people that came before did.They live in Roblox,” he said, referring to a popular gaming platform, “and they’re going to pay more attention and even evaluate something more as the truth if it’s part of worlds like that.”What’s more, doing it this way can evade Russian censors.

The country’s officials have blocked a lot of content about the invasion on traditional media and required that the war be called a “special military operation”; it has even banned some social media outright.But the Reface app and its antiwar messaging remains available on both Google Play and the Apple App Store, and the push notifications have been sent to Russian users 2 million times (out of 9 million globally).Bad reviews have already begun trickling into the app stores from Russian users.It is a pitfall of sorts in a new metaverse world in which immersive content may not be as easily refuted, but the entire product itself can be denigrated.Shvets, though, said such trolling efforts may not catch on the way its practitioners hope.“There are people who are going to use these tools to fight the truth,” Shvets said.“But others will see this and it will motivate them even more to go out in the streets and protest.“When you reach people where they’ve living,” he added, “they are going to react.”.

Fri Mar 4 , 2022
Your dwelling ground always serves as a force to inspire your work and when someone hails from a place so beautiful as Kashmir, the creative output is bound to be enticing.Designer Wajahat Rather comes from the Valley and runs a beautiful label called Raffughar in New Delhi.His designs draw a […] 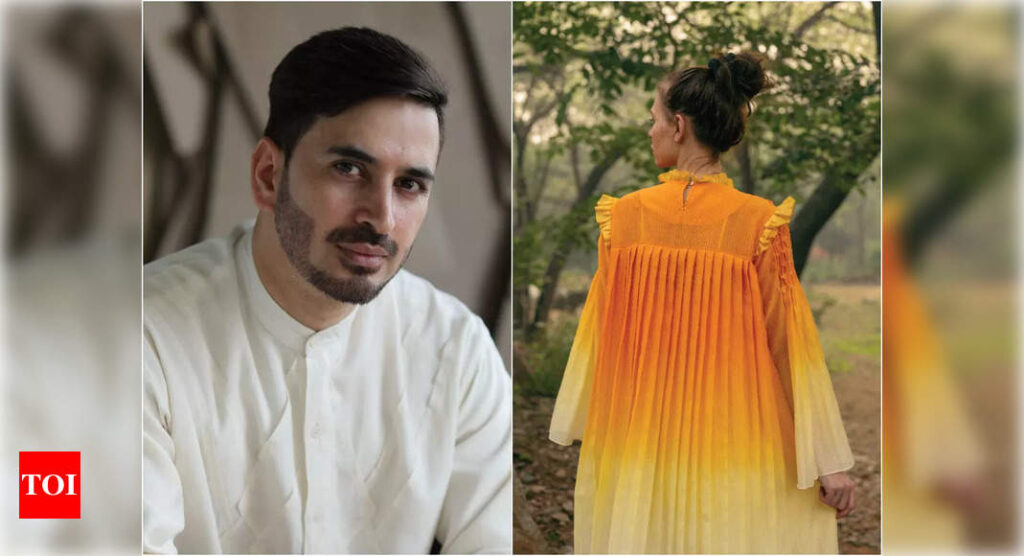