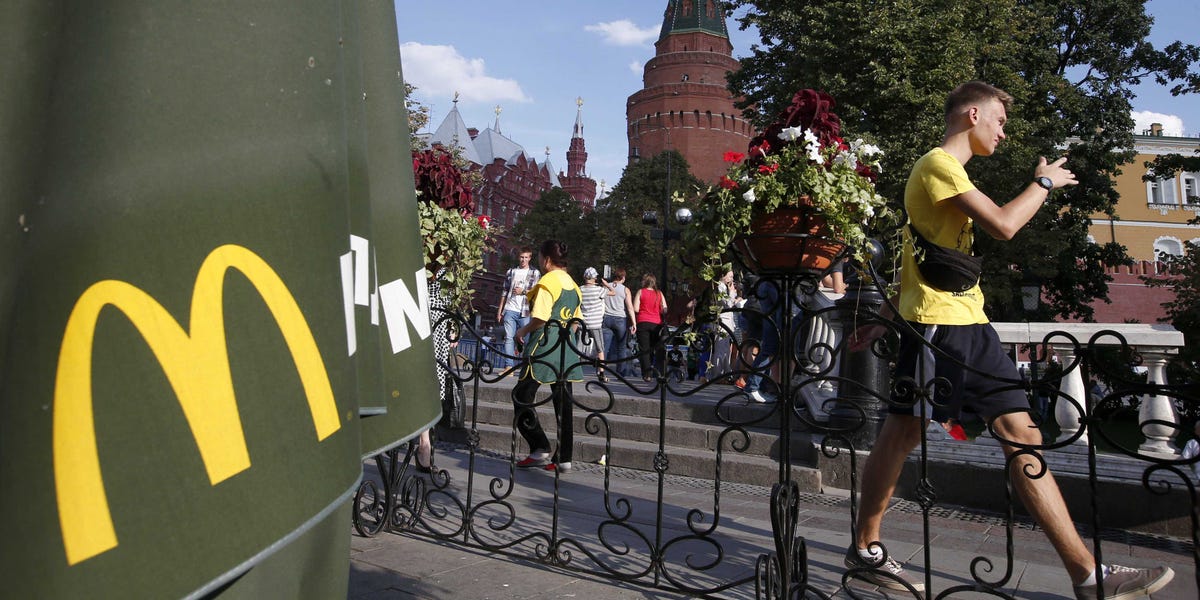 Fast food chains operate largely through franchise agreements, where restaurants are operated by third parties.Franchising makes it more complicated for international companies to close Russian locations.Contracts can only be terminated if one of the parties violates the terms, an expert told Insider.Sign up for our weekday newsletter, packed with original analysis, news, and trends — delivered right to your inbox.

Email address By clicking ‘Sign up’, you agree to receive marketing emails from Insider as well as other partner offers and accept our Terms of Service and Privacy Policy .McDonald’s , Burger King , and Papa John’s are being criticized for still having some stores open in Russia, but they’re powerless to do anything about it.

While many western companies were able to halt business in Russia almost immediately after saying they would, for others, it has been more complex.

Rather than owning and operating their own stores in Russia, many fast-food chains franchise out their brand to other third-party operators.

This means that they enter into a long-term agreement that permits a third party to use their brand.While they will give franchisees guidance and support to ensure the quality meets their own criteria, once they enter into this agreement, they won’t have full control over these locations.

McDonald’s was the first major US fast-food chain to pull out of Russia on March 8, and other big chains quickly followed suit.

However, some of the 100 franchise-operated Russian locations are still open, McDonald’s confirmed to Ria Novosti.

Papa John’s has faced a similar problem of a franchisee that doesn’t want to close.

The companies are speaking out to distance themselves from franchisees still operating in Russia.

“We at Papa Johns took swift action to cease any and all corporate operations in Russia including withdrawing any form of corporate support for the restaurants there.We do not own any assets or have any employees in Russia.We also are not deriving any income from Russia at this point.That being said, we cannot unilaterally cause the independent franchisees that operate there to stop operations,” Papa John’s told Insider.

“We hope for a fast arrival of a peaceful outcome.Until that happens, we will not be operating in Russia as a company.”

The president of Burger King’s parent company Restaurant Brands International was similarly upfront about the limitations of a franchise agreement in a letter to employees this week .

“Would we like to suspend all Burger King operations immediately in Russia? Yes.Are we able to enforce a suspension of operations today? No,” he said, wrote, explaining that a “complicated legal process” prevents it from forcing franchisees to halt business.

“There are no legal clauses that allow us to unilaterally change the contract or allow any one of the partners to simply walk away or overturn the entire agreement,” he said.

“Any current attempt to enforce our contract would ultimately require the support of Russian authorities on the ground and we know that will not practically happen anytime soon.”

Robert Lands, a lawyer at Howard Kenney who focuses on intellectual property law, said it’s not easy for brands to duck out of these agreements.

“They can’t just rip up a franchisee agreement as the franchisee hasn’t done anything wrong, it’s the government that is the issue,” he told Insider.

Only if a franchisee is acting in a way that harms the brand then they would have a right to terminate the contract, he said.

“But, if they are not doing anything other than being in Russia then you don’t have a right to terminate the contract so you would have to wait until it comes up for renewal, and not renew it, or negotiate an exit,” he said.

Sun Mar 20 , 2022
The Catholic bishop of Ekwuluobia Diocese, in Anambra State, Most Reverend Peter Okpaleke, has urged priests to shun prosperity and commercial preaching in churches.Okpaleke made the call on Saturday during the 51st Convocation of the Bigard Memorial Seminary, Enugu.Speaking in a lecture titled “Igbo Catholicism in 2035,” Okpaleke said Igbo […]