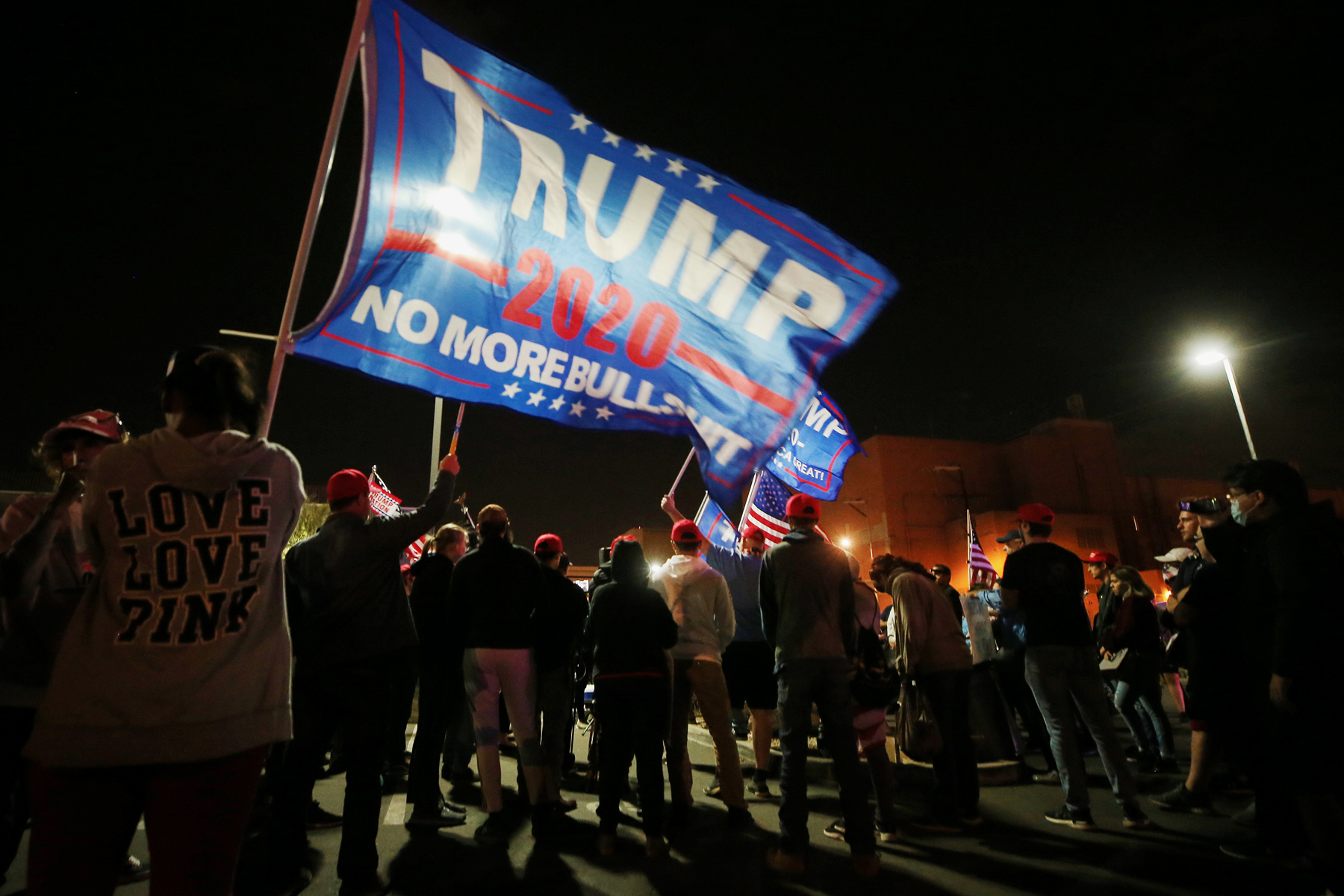 The technology was complicated, but the plan was simple: Scan mail-in and absentee ballots in populous Maricopa County, remove the “invalid votes,” and recertify the state’s 2020 election count, surely declaring then-President Donald Trump the rightful winner.

This scheme to subvert the election outcome in Arizona is laid out in newly released emails obtained by Rolling Stone .Sent in early December 2020, the emails cover a critical moment when the post-election push by Trump and Republican allies to find fraud and overturn the presidential election was in full swing.

The emails show how a group of fringe election sleuths pressed state legislators on a plan to disrupt the 2020 election certification and potentially change the vote count in a battleground state that helped deliver Joe Biden the presidency.The emails also reveal that several Trump advisers, including campaign lawyer Jenna Ellis and legal adviser Bernie Kerik, were included in the discussion.

But while the Trump campaign knew about this plotting, it was the obscure investigators and researchers, the emails show, who made the case directly to Arizona legislators about how to find supposed fraud and potentially use that evidence to challenge the outcome.

Those outside investigators remain active in the growing movement to find fraud in the 2020 election.

What’s more, one state lawmaker included on the emails, Mark Finchem, is now running for secretary of state in Arizona.If Finchem wins, he would oversee Arizona’s elections.

Bill Gates, the Republican chairman of the Maricopa County Board of Supervisors, was one of several election officials in Arizona who debunked many outlandish accusations of fraud and wrongdoing made by Trump and his allies.

For this, Gates was called a traitor, he and his family faced harassment, and he feared for his physical safety.Gates, who reviewed the emails, says they show pro-Trump activists and lawmakers “trying to figure out that hail-mary pass” to overturn the election.“They’re drawing up the hail-mary pass that obviously culminated in January 6,” he adds.“This is part and parcel of it.”

“This was not an organic effort,” he says.“This is obviously people from outside, along with Trump and his lieutenants, pushing this.”

This is not the first time that high-level Trump officials have appeared in documents about the Republican Party’s efforts to challenge the 2020 result.

Most of the new emails — first obtained by the watchdog group American Oversight and provided to Rolling Stone — were written by a man named Phil Waldron.A retired Army colonel who owns a bar and distillery outside of Austin, Texas, Waldron is emblematic of the crew of self-styled investigators and researchers that have emerged in the last 18 months to spout convoluted and sometimes easily debunked theories about election fraud.Waldron, who says he worked in the Defense Intelligence Agency’s clandestine service and had ties to former National Security Advisor Michael Flynn, is part of a small group of military veterans who have argued that Chinese Communist Party front groups, Venezuelans, and voting-machine companies have all contributed to vote-rigging and election fraud.

Waldron would go on to write a PowerPoint presentation titled “Election Fraud, Foreign Interference & Options for 6 JAN” that described a number of ways to try to stop the certification of Biden’s election victory.Waldron and his associates sent the document to multiple people, and it ultimately ended up in the inbox of White House chief of staff Mark Meadows.(A lawyer for Meadows said he didn’t act on it.

Waldron did not respond to a request for comment.)

According to the newly obtained emails, Waldron contacted multiple Arizona Republican lawmakers in early December 2020 about his strategy for identifying fraudulent votes.At the time, Republican legislators faced tremendous pressure from party activists and from President Trump to find evidence of fraud that would change the outcome of the election.Trump criticized Arizona’s Republican governor, Doug Ducey, for rebuffing the fraud claims and certifying Biden’s victory in the state.“Why is he rushing to put a Democrat in office, especially when so many horrible things concerning voter fraud are being revealed at the hearing going on right now,” Trump tweeted in late November 2020.

State House Speaker Rusty Bowers, a Republican, refused to bow to Trump’s demands that Arizona reverse its decision to certify Biden as the state’s victor and instead deliver the state’s 11 electoral vote to Trump.

“I voted for President Trump and worked hard to reelect him,” Bowers said in a statement.“But I cannot and will not entertain a suggestion that we violate current law to change the outcome of a certified election.”

Rudolph Giuliani and Jenna Ellis, attorneys for President Donald Trump, conduct a news conference at the Republican National Committee on lawsuits regarding the outcome of the 2020 presidential election on Thursday, November 19, 2020.

But behind the scenes, as the emails show, other Republicans were discussing plans with outside activists about to challenge the outcome.

In one email, on Dec.

8 , Waldron sent some of his team’s research to Arizona Rep.Mark Finchem.

A diehard Trump supporter and onetime member of the Oath Keepers militia, Finchem had amplified fraud claims during the 2020 campaign.Waldron included Trump aides Ellis and Kerik on that email.He also added what appears to be an email address for another Trump legal team volunteer who has received less scrutiny, a lawyer and one-time lobbyist named Katherine Friess.

When Trump allies pursued claims of fraud in a northern Michigan county — claims later proven to be false — Friess was one of a group of Republican lawyers who traveled to Michigan in a charter jet in late November 2020, according to reporting in the Traverse City Record Eagle .

Friess reportedly bragged to local election officials that she had dined with President Trump the night before she flew to northern Michigan’s Antrim County.

Friess’ name also appeared on the cover sheet of a “report” that Trump’s legal team provided to state lawmakers in early December.The report claims that Dominion Voting Systems’s software contained “glitches” that led to “thousands of votes being added to Joe Biden’s total ballot count.” (Dominion has refuted all such claims about its hardware and software, and sued multiple lawyers and media outlets for spreading them.) Friess has claimed she had nothing to do with the report.)

Yet another person on Waldron’s Dec.8 email was Russ Ramsland, a self-appointed election sleuth who has spread multiple election-related conspiracy theories and made fraud allegations that were later debunked .

Ellis, Kerik, Friess, and Ramsland did not respond to requests for comment.

That same day, Waldron wrote to Arizona state Sen.Sonny Borrelli, a Republican.“We have the capability to identify fraudulent ballots via optical scanning technology,” Waldron wrote.The gist of his plan, Waldron wrote , was this: “This will allow us to pull invalid votes out of the totals ‘By Candidate’ so that your state can certify normal elections and potentially not have to take extra legislative action.”

Sen.Borrelli forwarded this message to every Republican in the Arizona Senate, emails show.

11, Waldron wrote to three Arizona Republican lawmakers: Borrelli, Finchem, and Sen.Eddie Farnsworth, a Republican who chaired the judiciary committee.This time, Waldron included hundreds of pages of supporting documents purporting to describe how proprietary technology could be used to detect “kinetic markers” like folds and creases on ballots or the lack thereof, which in turn could be used to identify ballots that were “fraudulent or were not cast by a voter,” according to an attached affidavit .The documents also included operating manuals for hardware produced by Dominion Voting Systems.

Bill Gates, the Republican supervisor in Maricopa County, and Adrian Fontes, the county’s former Recorder and a Democrat, say they spotted multiple inaccuracies and misperceptions in Waldron’s emails.Images of ballots are not a public record , as Waldron claims in one of his emails.Fontes, who is now running for secretary of state, says he’s never heard anyone refer to “kinetic markings” on ballots in his years as an election official.

Fontes says, “This is the way the legislators got the wool pulled over their eyes.”

A few days after receiving Waldron’s Dec.11 email, Sen.Farnsworth announced he planned to subpoena information about Maricopa County’s software and hardware provided by Dominion.He said too many questions had been raised about the integrity of Arizona’s election, and the investigation was a way to “try and see if we can reinsert some confidence in our election process.”

Sen.Borrelli, another recipient of Waldron’s emails, said the operating manual for Dominion’s equipment laid out how “data can be changed and votes switched around,” adding, “Nothing’s 100 percent secure.If people want to cheat they’re going to cheat.” (Farnsworth and Borrelli did not respond to requests for comment.)

The Arizona Senate would go on to order a hand-counted audit of more than 2 million ballots cast in Maricopa County in 2020.

Still, election-law experts say no matter the audit’s outcome, it also served to further undermine trust in the last election and supply a pretext for legal and legislative changes in the future.

Bill Gates, the Maricopa Board of Supervisors chairman, says he believes the sham audit demanded by Arizona Republicans was in part fueled by the discredited claims of people like Waldron.“These are the people the Arizona state senate relied on in pursuing this effort, which has now been thoroughly discredited, wasted millions of dollars, wasted time, and accomplished nothing other than sowing doubt about our electoral system,” he says.“These people were the ones pushing it.They were the ones some of our Republican state senators listened to.”.

Mon Jan 24 , 2022
Elon Musk’s Neuralink has begun recruiting for a clinical trial director, bringing it one step closer to developing technology that could connect the human mind directly to devices.Neuralink’s goal is to build something called a “brain computer interface” that allows people to transmit and receive information between their brain and […]