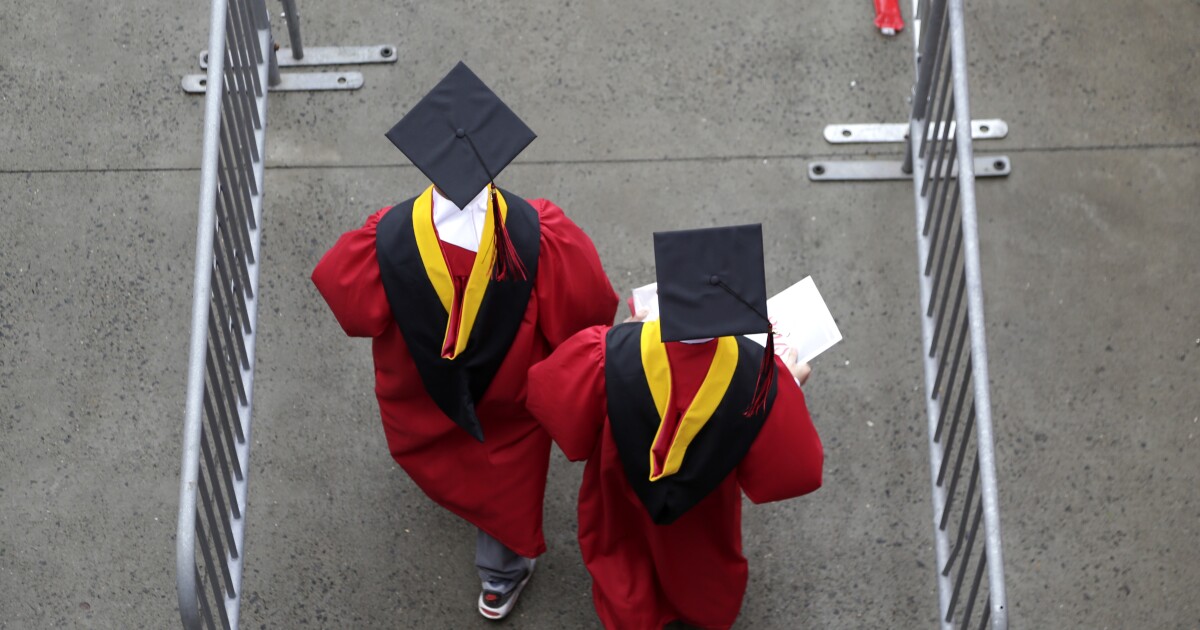 “Skills, not schools” might not be the best-known motto of our times, but it’s increasingly popular among employers.A growing number are willing to consider applicants for well-paid, white-collar jobs based on what they can do rather than on whether they hold a bachelor’s degree.

Earlier this month, the technology consulting firm Accenture announced that it was dramatically increasing its one-year apprenticeship program in the United States for training in such areas as data engineering and cybersecurity.Since 2016, the firm has hired 1,200 apprentices, most of whom did not have a four-year college degree.

In 2020, Google began offering six-month certificate programs during the pandemic, at extremely low to no cost, that train people in fields such as data analytics, program management and UX design.Program managers typically earn more than $90,000 a year.Career training is nothing new, but Google’s program is intended to replace the need for higher education by considering completion of these courses the equivalent of a bachelor’s degree in the relevant fields.

Editorial: You shouldn’t need a college degree to have a decent life in America

Not everyone wants or needs a four-year degree.

Apprenticeships, part-time learning and other workforce development ideas would make the economy fairer.

Advertisement Last June, I wrote about the effect of too many jobs which used to require just a high school diploma or some post-high school training now requiring a four-year bachelor’s degree.This “degree inflation” is a problem for students who choose not go to college or can’t afford college.It’s also a big problem for 40% of students at four-year institutions who never complete their degrees, despite investing time and money.

Degree inflation doesn’t work for employers, either, according to a Harvard Business School report .They end up paying more for college graduates who are less satisfied with the jobs, leave more quickly and often don’t do as good a job as workers without a degree.

That’s not the case in many European nations, where robust school-employer partnerships allow students to enter such fields as banking, software development, hotel management and social work without a four-year degree .

COVID-19 and the Black Lives Matter movement are proving potent forces that are starting to move the needle in the right direction.The pandemic created a labor shortage that prompted businesses to rethink their job requirements.

And the push for racial equity has persuaded a hefty number of employers to commit to a more diverse workforce.With more than half of Black college students dropping out of college, it makes sense to hire on the basis of abilities rather than degrees.

Adjunct faculty, generally underpaid and without job security, make up 75% of all college instructors.

Higher education now depends on them, which could be a saving grace.

An effort called OneTen was launched at the end of 2020 by leaders at Merck and IBM, with a goal of getting a million Black workers who lack four-year degrees hired or promoted this decade.The aim is for them to find “family-sustaining” careers, with an emphasis on hiring for skills.More than 50 employers have signed on.The Rework American Business Network, an initiative of the Markle Foundation, has been prodding employers to place more emphasis on skills when hiring.

It has drawn a handful of member businesses so far — but they’re big ones, including AT&T, Kaiser Permanente and Microsoft.

American workers without college degrees have been losing ground on many fronts — partly from degree inflation and partly because so many skilled manufacturing jobs, which used to be a path to the middle class, have moved overseas.The Obama administration, whose education policies were strongly influenced by Microsoft founder Bill Gates’ mantra that the jobs of the 21st century would increasingly require college degrees, pushed for ever-increasing numbers of students to attend college.

President Trump insisted — incorrectly — that he could stem the outflow of manufacturing jobs and bring some of them back to the U.S.To his credit, though, he also signed an executive order a few months into the pandemic that requires hiring for many federal jobs to emphasize competency over formal education, noting that “overreliance on college degrees excludes capable candidates and undermines labor-market efficiencies.”

Forcing a return to a manufacturing economy was always a fantasy.But it’s impractical and ineffective to force students into years-long commitments — and debt — they don’t need in order to have a successful career.

The Biden administration, unfortunately, has not taken a lead on the skills-not-schools movement, when it could make this approach a part of federal education policy.Gov.

Gavin Newsom, likewise, should put more effort into making California a leader in the apprenticeship and white-collar skills movement.

Another possible benefit to the shift to favor skills over degrees: Colleges, noting that American families are finding ways to succeed without them and anxious to keep enrollment stable, might be prompted to stop the administrative bloat and reliance on the availability of loans that has been feeding the skyrocketing cost of tuition.

Look, I’m a big believer in college education.I was lucky enough to get one and so were my kids (with a lot of financial grunting and groaning on my part).And there’s more to college than just getting trained for a good job.

The richness of deeper knowledge, active research and stimulating discussion is worthwhile for its own sake.An educated populace capable of critical thinking is key to preserving our democracy.

I also worry that the skills-not-schools movement might become an excuse to stop the push toward educational equity and undermine efforts to get more Black and Latino students qualified for four-year college degrees.

But college isn’t the dream for everyone.Not having a college degree shouldn’t be an automatic employment disqualifier for well-paid jobs.We’re starting to challenge seriously the decades-long trend of degree inflation.Let’s keep that going..

The Supreme Court supported compulsory vaccinations in 1905. What changed in 2022?

Mon Jan 24 , 2022
When reports first trickled out that Justice Neil Gorsuch refused to wear a mask in the courtroom, and that as a result his fellow Supreme Court judge Sonia Sotomayor needed to work through Zoom as a result, the backlash was swift and unsurprising.No doubt with an eye toward protecting its […]