Border lockdowns and supply chain disruptions caused by COVID-19 have failed to slow the huge uptake of rooftop solar in Australia, with householders installing record amounts of new capacity last year.Figures from the Clean Energy Regulator (CER) show more than 3,000MW of small-scale solar capacity was added to grids around the country in the 12 months to December 31, pipping the previous high of 2,964MW in 2020.Combined, the capacity of the newly installed solar eclipsed the size of Australia’s biggest power station, the 2,880MW Eraring coal-fired plant operated by Origin Energy in New South Wales.Also, the CER said there was typically a lag of up to 12 months in the reporting of new units, meaning the figure was likely to be even higher.Across Australia, more than 360,000 customers had solar panels installed on their roofs last year, in line with 2020 and more than double the number that went up in 2015.A spokesman for the CER said this was expected to rise to 380,000 installations with a total capacity of 3,200MW for the period.Central to the record uptake is the growing average size of new solar installations, which the CER noted had increased from 8kW to 8.3kW.The regulator said this trend showed few signs of stopping, noting it was increasingly seeing systems in the 10–15kW bracket going up on roofs.

Industry experts said the latest figures captured the extraordinary rise of rooftop solar in Australia, which has become one of the world’s biggest adopters of the technology.Since 2001, when there were 118 systems in the country, the number of customers with solar panels has ballooned to more than 3 million.According to the body that runs the country’s main electricity systems — the Australian Energy Market Operator (AEMO) — rooftop solar is now generating significant chunks of the nation’s power at various times.In its snapshot of the market during the three months to December 31, AEMO noted photovoltaic cells accounted for 32 per cent of total generation in the middle of the day on November 15.Tony Wood, the energy and climate change program director at the Grattan Institute, said the record uptake of solar was a mixed blessing.Mr Wood said the seemingly insatiable demand for solar power from Australian households was allowing many to cut their energy bills while generating clean electricity.Australia, he noted, was the world’s leading jurisdiction for small-scale solar, driven by generous government subsidies and the plummeting costs of photovoltaic technology.However, he said the ever-increasing amounts of solar on roofs was presenting technical challenges for the grid , which was becoming unstable at times as more intermittent renewable generation entered the mix.

Crucially, he said the combined output from solar was now so great at certain times — typically on mild, sunny weekend days when businesses were closed — that minimum levels of demand for power from the grid were reaching critical lows .In those circumstances, he said fossil fuel-fired generators such as coal and gas plants were having to switch off to avoid overloading the grid, depriving the system of the backup services they traditionally provided.

“3,000MW of solar in terms of contributing energy to the system is a lot different to 3,000MW of coal- or gas-fired power, which can be there overwhelmingly most of the time,” Mr Wood said.”Also, you can pretty well turn it on or off as it’s needed because the coal or the gas is just sitting there.”We don’t have that same capacity with renewables.

“That doesn’t mean it’s good or bad — it’s just got different characteristics that have to be managed.” On top of the technical challenges, Mr Wood said the rise of solar was causing economic headaches as regulators and companies tried to cope with the surging levels of output from the systems .He said there was now so much solar power being generated in the middle of the day — and not enough demand from users or storage such as batteries — that the electricity was virtually worthless.Despite this, he said households were still largely able to offload that power to electricity companies.And he said that while customers with solar panels were able to slash their bills by drawing less energy from the grid, they were prolific users of the network of poles and wires.This meant the need for electricity tariffs to recover the costs of the distribution system was essential, he said.”It’s like if we all grew some of our food … and then we decided we were going to require Coles or Woolworths to buy it from us,” he said.”Coles and Woolworths would say ‘Wait a second, we don’t want you dumping a whole lot of excess tomatoes at our retail store just when we have a glut of tomatoes’.” Video: NSW State Government to push for shorter gap before booster jab (ABC NEWS) Transport and Tourism Forum CEO speaks on border reopening National weather forecast for Tuesday February 8 Military to help battle aged care crisis Australia set to re-open to world Young man dies after Warnbro shooting Woman recovering in hospital after shark attack NSW sends reinforcements to help battle WA bushfires WA introduces new close contact definition Trial of Zachary Rolfe begins in Supreme Court in Darwin Slater reveals Maroons assistant coach A dozen people died on Queensland roads in February Queensland students finally back to school Sydney council installs smart cameras to stop hoons Bird opens up on injury battles SA Premier announces $30 meal vouchers E-scooters cause havoc on Melbourne roads.

Tue Feb 8 , 2022
Frontier is buying Spirit Airlines in a $2.9 billion cash-and-stock deal that will create the nation’s fifth-largest carrier. The companies said Monday that the transaction will provide more low-cost fares for more travelers to destinations in the U.S., Latin America and the Caribbean.Frontier Group Holdings and Spirit Airlines also anticipate […] 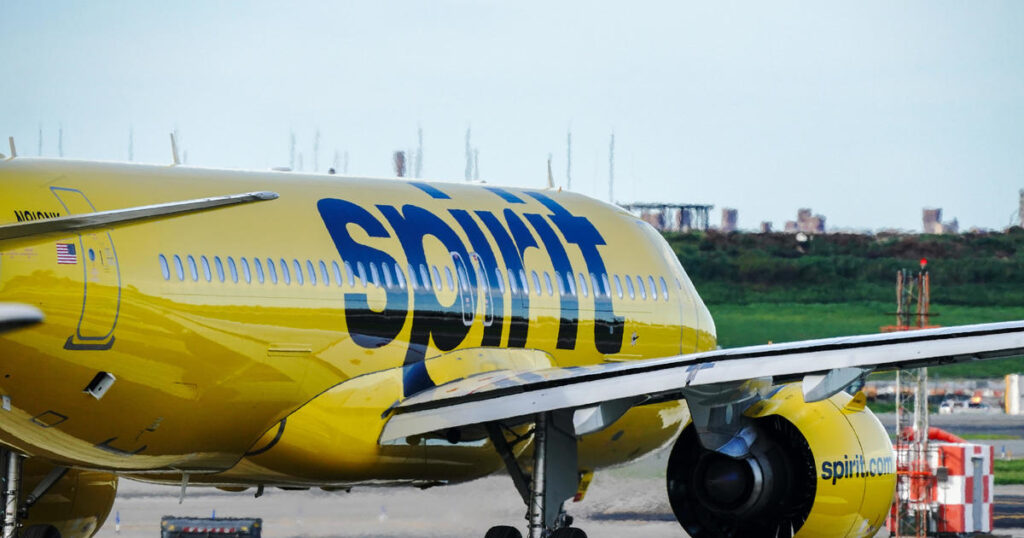