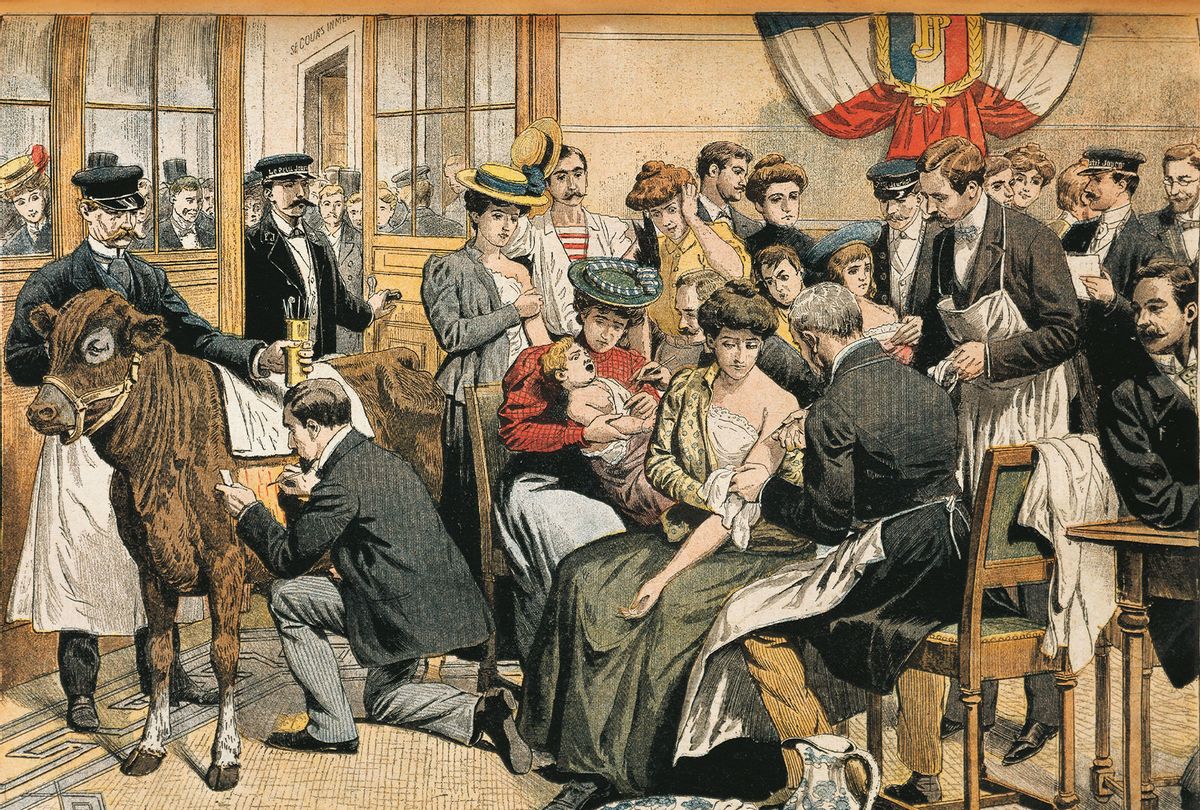 When reports first trickled out that Justice Neil Gorsuch refused to wear a mask in the courtroom, and that as a result his fellow Supreme Court judge Sonia Sotomayor needed to work through Zoom as a result, the backlash was swift and unsurprising.No doubt with an eye toward protecting its reputation as an august body above petty partisan bickering, the court and its representatives quickly moved to squash the rumors.While it is still unclear what exactly has happened, the justices would like you to think everyone remains respectful to each other, while skeptics and leaks insist tensions are at a historic high.

Ultimately, such reports reveals a deeper problem of partisanship within the nation’s highest court.It is the same problem revealed, with far more serious and obvious consequences, in the bench’s recent decision about President Joe Biden’s vaccine mandates .We live in an era when major decisions about public health are motivated by a partisanship so intense that even educated men and women on America’s most powerful court will display willful scientific illiteracy in order to sustain their positions.This was seen in the decision to overturn the vaccine mandates — and is perhaps most effectively illustrated through a contrast how the Supreme Court handled a similar case more than a century earlier.

The story begins in 1902, when the Cambridge, Mass.

Board of Health ordered its citizens to get either vaccinated or revaccinated to stop a smallpox outbreak.Henning Jacobson, a pastor who had suffered severe side effects when being forcibly vaccinated against the disease in his native Sweden, refused to be inoculated on this occasion and was fined $5.

Believing that his rights had been violated, Jacobson fought the case as a matter of principle and took it all the way to the Supreme Court.The result was their famous 1905 ruling in Jacobson v.Massachusetts.

“There is, of course, a sphere within which the individual may assert the supremacy of his own will, and rightfully dispute the authority of any human government, especially of any free government existing under a written constitution, to interfere with the exercise of that will,” Justice John Marshall Harlan explained in the 7-2 decision .”But it is equally true that in every well-ordered society charged with the duty of conserving the safety of its members the rights of the individual in respect of his liberty may at times, under the pressure of great dangers, be subjected to such restraint, to be enforced by reasonable regulations, as the safety of the general public may demand.”

He added that the preservation of freedom does not merely involve protecting what a person can do, but making sure that there actions do not constrain the rights of others.

True freedom cannot exist “under the operation of a principle which recognizes the right of each individual person to use his own [liberty], whether in respect of his person or his property, regardless of the injury that may be done to others.”

RELATED: Like COVID-19, the Black Death had its own “truther” movement, too

A couple of details stand out from this case.First, this ruling was rendered at a time when authorities took it for granted that states rather than the federal government were responsible for these kinds of public health decisions — an attitude that was reflected as far back as George Washington’s day (he also supported mandatory vaccinations ).This means that the court did not have the option of ruling on federal power to address pandemics; its thinking, therefore, can best be gleaned by analogous cases such as this one.

Second, unlike anti-vaccine advocates today, Jacobson lived in an era when inoculations were more dangerous, and his concerns therefore had more scientific legitimacy.Nevertheless, technology had advanced to the point where the benefits to the public as a whole of mandatory vaccinations outweighed the risk incurred by each individual in obtaining them.

Finally, and most significantly, the judges took it for granted that they needed to listen to the scientific consensus.

They recognized that their expertise was in legal theory, not science, and felt it was their responsibility to align their reasoning with legal precedent rather than partisan demands.

It helped immensely, of course, that the case in question was not politically charged.

“There was no obvious division between Democrats and Republicans on the question of how deeply government regulation can affect the workplace or one’s bodily integrity,” Laurence Tribe, a professor at Harvard Law School, told Salon.”Those were things that cut across party lines.Now what we have is a lot of political ideology with partisan affiliation, and we have the court moving in the direction of that ideological and partisan leaning when it pushes back against OSHA’s regulation.”

Tribe’s reference to OSHA, or the Occupational Safety and Health Administration, addresses the underlying issue in the vaccine mandates case.In the case of National Federation of Independent Business v.

Occupational Safety and Health Administration, the Supreme Court had to consider whether OSHA has the authority to force private companies to require their employees to be vaccinated.They argued that the COVID-19 pandemic is a broad public hazard rather than one which is specific to the workplace, and that the agency therefore does not have the authority to enforce vaccine mandates.(They established one exception, ruling in Biden v.Missouri that the mandate can reasonably apply to healthcare workers.) To do so, the conservative judges — particular Gorsuch, Clarence Thomas and Samuel Alito — underplayed the threat posed by COVID-19 and the effectiveness of vaccines and masks in curtailing it.Otherwise, it would be self-evidently absurd to argue that it was not a workplace safety issue.

“Supreme Court justices from any era have very little understanding of science and public health,” Lawrence Gostin, a professor at Georgetown Law who specializes in public health law and has written about the case , told Salon by email.

“But the Court in Jacobson understood it had little scientific expertise and therefore deferred to the decision of public health agencies.The modern Supreme Court suffers from arrogance that wasn’t evident in 1905.They brazenly substituted their judgment for that of experienced public health agencies.The Court in its oral arguments made egregious errors about COVID transmission and vaccinations.”

While it is tempting to characterize this as a “war on science,” the target here is not the discipline of science or even necessarily the medical ideas that are currently controversial.The judges are acting not out of hostility toward science, but out of affinity for the idea that are most trendy within conservative political circles.

The science behind stopping infectious diseases is not the target; it’s a bystander.

“I think the Supreme Court’s belief in states rights and federalism was at the core of its decision,” Gostin explained, arguing that the “one good reason” for the court’s decision was that “public health powers have historically been exercised at the state and local level.” As Gostin pointed out, though, “COVID-19 has taught us that states acting alone cannot curtail a pandemic.We need strong national rules.

By striking down the OSHA mandate, it was devastating to the US COVID-19 response.”

“The court in the current vaccine case was tone deaf to the science,” Tribe added, pointing out that they did not deny that COVID-19 is highly infectious but instead chose not to pay much attention to that fact.”The court did not take an anti-vaxx position.On the contrary, it has upheld a number of state mandates just in recent months, so that it is not at all that the court today would come out differently in a case like Jacobson.” At the same time, while the court in 1905 was able to buck the anti-regulatory trends of its time in order to save lives from a deadly disease, the court in 2022 was hostage to its own political biases.

“In the current case, the court was simply swimming with the ideology,” Tribe told Salon.”It’s the ideological current that it had itself churned up that has been pushing away from government regulation now.It struck down this regulation consistent with that tendency, even though it would’ve upheld a regulation at the state level.”

This is not to say that politics alone explain the judges’ decision.Like all people, they are influenced by their environment and backgrounds, and therefore are prone to viewing the world in a way that is distorted by those factors.

“I believe that many of the justices are arrogant and out of touch because they have lived such privileged lives, Gostin wrote to Salon when asked about what has changed on the court between 1905 and 2022.”Many have also been judges or have held other positions where others give them great deference.These justices may also feel a sense of superiority.

Overall, many justices do not come from backgrounds that are conducive to compassion and understanding of the lives of others who have had to struggle and have so often experienced injustice and dignity violations.”

Read more on the history of plagues and pandemics:

– [The Black Death led to the demise of feudalism.Could this pandemic have a similar effect?]

– [As the pandemic slowly abates, humanity will have to reckon with historical trauma]

Mon Jan 24 , 2022
Elon Musk is developing a brain implant for humans he formerly said may have the potential to “save and replay memories.” Several Twitter users compared the technology to a similar device seen in an episode of Netflix’s “Black Mirror.” The brain-chip technology is primarily aimed at helping provide more agency […]