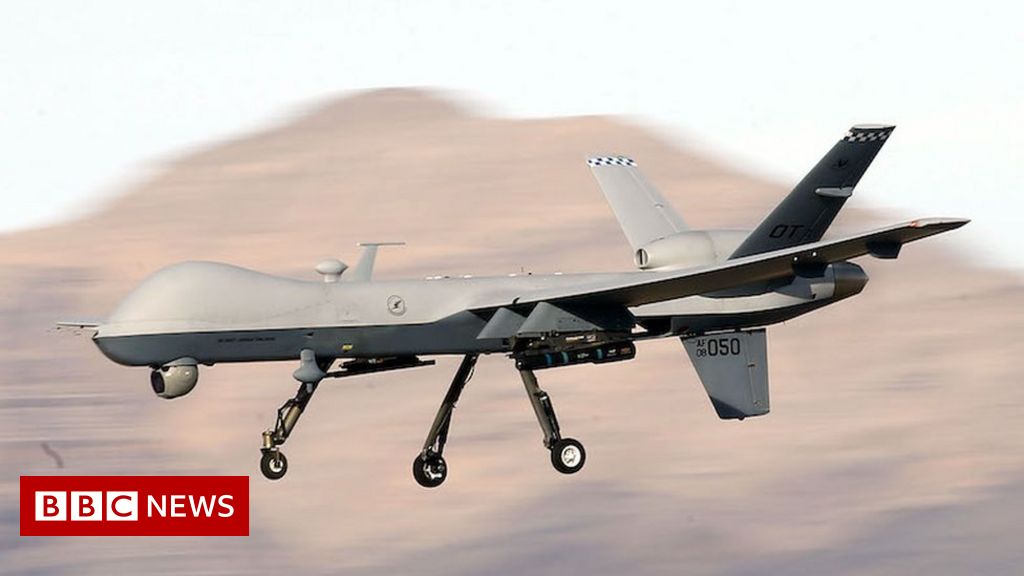 Combat drones: We are in a new era of warfare – here’s why Published

Copy link About sharing Related Topics Ukraine conflict Image source, Getty Images Image caption, An MQ-9 Reaper on a training mission in Nevada The combat drone was once the preserve of military superpowers but no longer.Its use by insurgents and smaller nations is already changing the nature of battle, writes Jonathan Marcus.

Often in military history a single weapons system can become emblematic of a whole age of warfare.

One thinks of the longbow used by the English archers at Agincourt in the Middle Ages or the heavily armoured tanks that epitomised the ground combat of World War Two.

The MQ-1 Predator unmanned aerial vehicle or UAV became the iconic weapon of that period of counter-insurgency warfare waged by the United States in Afghanistan, Iraq and elsewhere.

This corresponded with what has been called “the uni-polar moment” after the end of the Cold War, when the US stood alone and unchallenged as the dominant global superpower.

The drones’ symbolic status only grew when Predator – originally conceived for aerial reconnaissance – was armed with Hellfire missiles.

Image source, Getty Images Image caption, General Qasem Soleimani was killed by a drone strike Its successor, the Reaper, was specifically designed as a hunter-killer.It has a greater range than its predecessor and can carry a larger weight of munitions.Their very names explicitly flag up their purpose.

These can be precise killers capable of targeting Washington’s enemies whenever and wherever they least expect it.It was Reaper drones that are believed to have been used to kill the Iranian general Qasem Soleimani outside Baghdad airport in January 2020.

For a brief period of time it was largely the United States and Israel (with its own significant drone industry) who were able to carry out such operations.This, if you like, was the first age of the combat drone.

However, things have dramatically changed.

A new era of drone warfare has already arrived involving many more players.And the use of UAVs has moved from counter-terrorism or counter-insurgency warfare into full scale conventional combat.

Indeed, up ahead, a new third age of drone warfare beckons as technology becomes ever more sophisticated and linked to artificial intelligence.

The Ethiopian Government has purchased armed drones from Turkey and Iran.

It is also reported to have access to Chinese Wing Loong II UAVs via the United Arab Emirates.

In many cases armed drones have had a decisive impact, contributing to the survival of Libya’s internationally recognised government in Tripoli and, in last year’s Nagorno-Karabakh conflict, Turkish supplied drones were a potent factor enabling Azerbaijan’s forces to wrest control of the disputed enclave from Armenia.

Image source, Getty Images Image caption, The wreckage of a tank in Ethiopia following a reported drone attack Drones strikes often raise complex legal and moral dilemmas.They can only be as accurate as the intelligence upon which they are based.The hope that their use might be curbed in some way by arms control treaties has proved illusory.

While the US has been reluctant to export its leading edge technology to anyone other than its closest allies, others make no such distinctions.

Over 100 countries and non-state groups have drones, and many actors have access to armed drones.Indeed as Paul Scharre, Director of Studies at the Center for New American Security says, the proliferation of these systems looks set to continue.

“China”, he says, “is by far the leading exporter of armed drones worldwide.But drones are not just accessible to leading military powers.Middle powers such as Iran and Turkey have access to drone technology and are selling systems abroad.”

Indeed he argues that “commercial drone technology is so widely available that anyone could build a crude DIY attack drone for a few hundred dollars, and some terrorist groups have”.

The UAV’s decisive impact is no surprise, he adds.They give a country an air force on the cheap.

“States and non-state groups that can’t afford to buy fighter jets can buy drones,” he says, “and while drones are not as capable as fighter jets, they give actors access to some airpower.Combined with digital technologies that enable high-definition surveillance and precision strike, drones can be quite lethal to ground forces.”

But the use of UAVs in regional conflicts and civil wars provides only a pointer to the drone’s value in future warfare.

While the US and its allies were focused upon counter-insurgency operations, Russia used its involvement in Syria as a testing ground for the incorporation of drones into its wider order of battle.

“This concept is now redefining how the Russian military fights today and in the future by giving forces a UAV-enabled round-the-clock picture of the battlefield, something that the generals did not have before.”

The fighting in Ukraine, which despite Russian denials, has involved regular Russian personnel, has provided valuable insight into its planned use of UAVs.

Read more from Jonathan Could China’s hypersonic missile spark a new arms race? How will we know if war has started in Ukraine? Mood is downbeat but could Iran talks succeed? Several types of Russian-made drones have been shot down over eastern Ukraine.

Mr Bendett says that intelligence gathering and reconnaissance remain their key mission, “but that they also have another important role in electronic warfare, with a special class of Russian drones fitted for that purpose”.

Electronic warfare is the art of locating enemy forces by the signals that they send out and then isolating them by jamming their communications.

Russia may be a decade or so behind the US in terms of the sophistication of its most advanced technology, but the Russian armed forces may well be ahead in terms of integrating drones into their fighting units.

“The utility of this organisation has been proven in combat with instances of Ukrainian armoured units speedily identified; their communications jammed and devastating artillery fire directed against them.”

Indeed Ukraine too has access to armed Turkish drones, having used them against pro-Russian separatists in the Donbas fighting.

To play this video you need to enable JavaScript in your browser.Media caption, Two Ukrainian volunteers on a drone reconnaissance mission into the rebel-held Donetsk Away from the high-intensity battlefield, drones are still being used by insurgents and militia units.

But if the drone threat is relatively well understood, why is it so hard to counter?

“Most drones in use today are smaller than traditional military aircraft and require different kinds of air defences,” says Mr Scharre.”They fly slower and lower to the ground and that means that many air defence systems are not optimised to shoot them down.”

Many countries, he says, are working to develop counter-measures against drones, and over time we’ll see more effective counter-drone systems spread to battlefields as well.One challenge, though, will be countering massed drone attacks, since low-cost drones can be built in large numbers.

There’s been a lot of talk about futuristic, so-called “drone swarms”.

We’ve already seen massed drone attacks, such as that in 2018 by Syrian rebels against a Russia air base that used 13 drones.However, Paul Scharre insists that a deluge of drones is not a true swarm.

Swarming, he argues, “isn’t so much defined by the number of drones in an attack but by their ability to co-operate together without any human involvement.”

And drone swarms could be used for simultaneous, multi-directional attacks in ways that could overwhelm human defenders.

Over time, he warns, this could have a dramatic effect in transforming warfare.

Sun Feb 6 , 2022
Donald Trump has praised the freedom convoy, a group of Canadian truckers protesting US-Canada vaccine mandates.The former President called Trudeau a “far-left lunatic” for his COVID-19 rules and restrictions.The Canadian police have confirmed they are working to shutdown the protests, which have lasted over a week.Get a daily selection of […]