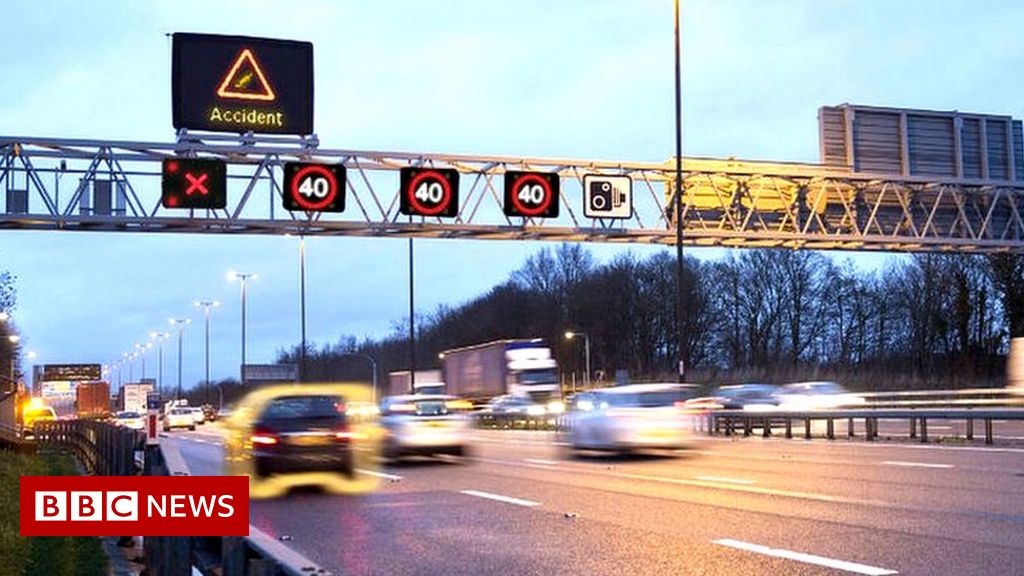 Using the hard shoulder as a permanent live traffic lane increases capacity, but critics say it has contributed to road deaths.

Five years of safety and economic data for the schemes will now be collected from the motorways built before 2020.

However, hard shoulders will not be reinstated on current stretches of all-lane running motorways.

The government’s move comes after MPs said in November there was not enough safety and economic data to justify continuing this type of scheme.

If a car breaks down on all-lane running smart motorways, drivers are meant to aim for emergency refuge areas.

But critics say the schemes can leave cars stranded in fast-moving traffic.

About 200 miles of these lack a permanent hard shoulder, and 63 miles use it as a live running lane some of the time.

Wednesday’s decision means that another 100 miles of all-lane running currently in construction can still be completed, while 57 miles are paused for now.

The pause applies to smart motorways in England.Responsibility for motorways in Northern Ireland, Scotland and Wales is devolved.

What is a smart motorway? A smart motorway is a stretch of road where technology is used to regulate traffic flow and – hopefully – ease congestion.There are three main types:

Controlled, which have a permanent hard shoulder, but use technology such as variable speed limits to adjust traffic flows Dynamic, where the hard shoulder can be opened up at peak times and used as an extra lane; when this happens, the speed limit is reduced to 60mph All-lane running, where the hard shoulder has been permanently removed to provide an extra lane; emergency refuge areas are provided at intervals for cars that get into trouble All three models use overhead gantries to direct drivers.Variable speed limits are introduced to control traffic flow when there is congestion, or if there is a hazard ahead.These limits are controlled by speed cameras.

According to government figures, 38 people were killed on smart motorways between 2014 and 2019.

Schemes that are already under construction will be completed, the government said, and on existing all-lane running motorways, £390m of public funds will be provided for more refuge areas and technology to detect stopped vehicles.

Refuge areas should be no more than 1.5km apart, and should be 1km apart where possible, it said.At the moment there can be up to 2.5km between them.

Image caption, Claire Mercer, from Rotherham, has campaigned against the use of smart motorways since her husband’s death The Department for Transport (DfT) said where hard shoulders have been removed, they won’t be reinstated, as they “do not always provide a safe place to stop” and could also push more traffic onto local roads.

But campaigner Claire Mercer, whose husband Jason was killed on a stretch of smart motorway near Sheffield in 2019, said: “The only acceptable thing would be for all hard shoulders to be returned permanently, 24/7, on all motorways.”

If that doesn’t happen, she said: “We’ll carry on fighting, and pushing the legal challenge.”

Jason was killed when he and another driver stopped in a live lane of an all-lane running motorway after a minor collision and were hit by a lorry.

Transport Secretary Grant Shapps said: “While our initial data shows that smart motorways are among the safest roads in the UK, it’s crucial that we go further to ensure people feel safer using them.”

As part of its review, the government said it will look at how controlled motorways, which have a hard shoulder, compare with all-lane running ones.

He said there was “no immediate closure of the lane” he had stopped in, which led to “three very scary near-misses”.

“I had abuse hurled at me, horns sounding at me,” he added.

“Nothing happened for five or 10 minutes in terms of the lane being controlled so I dialled 999, and the emergency services sorted it out, but the highways people didn’t turn up for about 20 minutes.

“I got myself over the crash barrier, but if I’d had my youngest son with me, who is physically disabled, learning disabled, and autistic, I never would have got him out of the car.”

The government said in March 2020 that all new smart motorways would be all-lane running, but in November that year MPs on the Commons transport select committee said more safety data was needed.

Sir Mike Penning, who supported smart motorways when serving as roads minister between 2010 and 2012, said on Wednesday the government had not gone far enough, and should bring back hard shoulders while it was reviewing the data.

‘Sitting ducks’ Motoring organisation the AA said drivers become “sitting ducks” if there are not enough refuges and not accurate enough technology to warn of dangers.

Meanwhile, the RAC said many drivers “have deeply held concerns over the safety of motorways where the hard shoulder is permanently removed” and added it was pleased the pause button had been hit.

Duncan Smith, executive director of operations at National Highways, told the BBC he was “convinced” smart motorways were safe and that there was “more we can do convince people that they are safe”.

The government agency, which monitors major roads, is putting up more signs for emergency bays and rolling out a radar-based system which should alert its control room about a stranded vehicle within 20 seconds.

The point of smart motorways is to increase capacity and cut congestion, without the cost and disruption of building new roads or widening existing ones.

This a significant moment in their journey.

The rollout of “all-lane running” won’t go into reverse, but the brakes have been applied.

Further safety and economic data will be gathered, and the effectiveness of planned improvements assessed, before any new projects get under way.

Some campaigners will never accept anything less than hard shoulders being reinstated where they’ve already made way for an extra lane of traffic.

The government’s view remains that this would not be the right thing to do, and the focus should be on upgrading safety instead.

The BBC is not responsible for the content of external sites.Related Topics Highways England Traffic congestion and policy Department for Transport Road safety Motoring.

A historically underfunded IRS is preparing for a rough tax season and only has 1 person for every 16,000 calls it gets

Thu Jan 13 , 2022
Treasury officials are warning that the IRS faces a very difficult tax season this year.It could spell delays for tax refunds, particularly for people using paper forms.A top Senate Democrat told Insider he’s not ruling out pushing for an extension.Get a daily selection of our top stories based on your […]