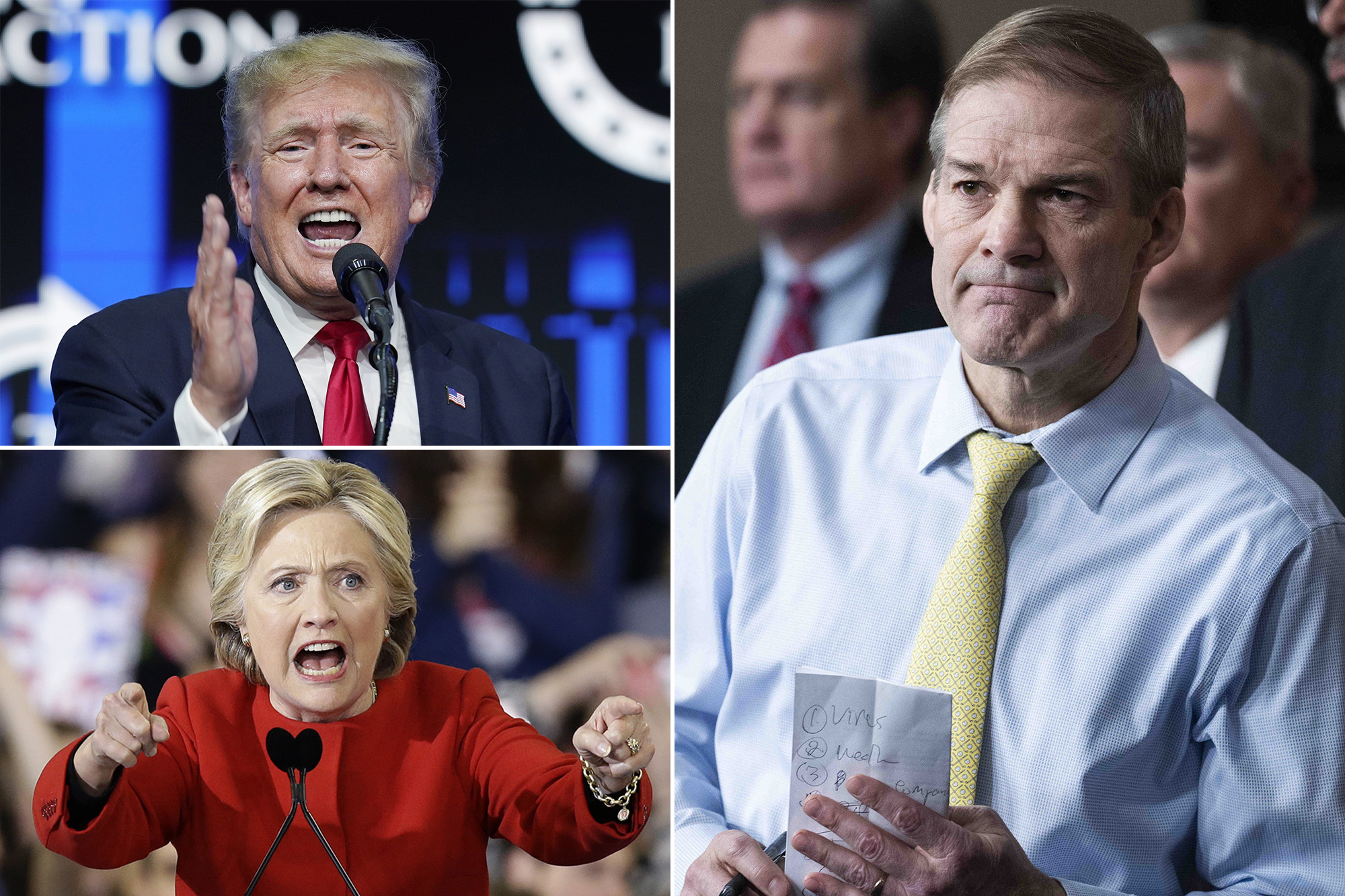 More On: donald trump Eyes turn to Hillary Clinton, not Trump in the Russiagate scandal These football coaches spent Super Bowl weekend at Mar-a-Lago Most Dems want Clinton investigated for any role in Russiagate scandal: poll Parties split on Biden, Trump running again in 2024 election: poll The top Republican on the House Judiciary Committee said Sunday that a blockbuster new federal filing proves ex-President Trump’s claim he was being illegally spied on and the Russian collusion tale is a hoax.

“Yep, there was spying going on, and it was worse than we thought because they were spying on the sitting ​p​resident of the United States,” Jordan told “Fox & Friends.” “And it goes right to the Clinton campaign.So God bless John D​urham​.

“​His investigation is taking a long time.But we’re getting to ​now what we all suspected,” Jordan said.“The only thing we didn’t understand was it was worse than we thought​.”

In May 2019, Durham was tasked by Trump’s attorney general, William Barr, with investigating the origins of the FBI’s probe into allegations that the then-president colluded with Russia to win the election.

Michael Turner ​(R-Ohio) ​said Sunday that Durham’s investigation uncovered a “whole new level of corruption and is of grave concern.

“I mean, this is a threat to our democracy itself,” Turner said on Fox News’ “Sunday Morning Futures.”​ “It doesn’t matter really which political campaign this is or which political party this is.This is so wrong and allegations of such ​a ​level of illegal activity that goes directly to our faith in our own government that the truth must be found​.”

“I think that what we see is not just political shenanigans or opposition research that you would see in the normal campaigns where people are trying to find information out about their opponents​,” Turner said.​

According to a filing from Durham, Hillary Clinton’s campaign paid a company to “infiltrate” servers at Trump Tower and the White House.AP Photo/Gerry Broome, File “This is where ​the ​government is being used, where information that’s political opposition research that is false is being made up, is trying to be placed into the government, into the FBI, to undertake criminal investigations that are absolutely false​,” he cont

Trump seethed in a statement Saturday that Durham’s filing “provides indisputable evidence that my campaign and presidency were spied on by operatives paid by the Hillary Clinton Campaign in an effort to develop a completely fabricated connection to Russia.​

“​This is a scandal far greater in scope and magnitude than Watergate and those who were involved in and knew about this spying operation should be subject to criminal prosecution,” said Trump, who beat Clinton to score the White House in an upset in 2016.

“In a stronger period of time in our country, this crime would have been punishable by death​,” he said, suggesting that the Clinton campaign’s action​ amounts to treason.

Trump claimed in a statement that those who were involved in the alleged “spying operation” should be “subject to criminal prosecution.” AP Photo/Ross D.Franklin ​Jordan said Trump is right that Durham’s filing provides “indisputable evidence” that he was being spied on.

“We’ve never seen anything like this in history,” Jordan said.

“So President Trump’s statement yesterday, I think, is right on target.This is truly unprecedented, truly something that has never happened in the history of our great country.”

Durham’s motion Friday was related to the case of Michael Sussmann , a former Clinton campaign lawyer who has been charged with lying to the feds.Sussmann allegedly told the FBI that he wasn’t working for the Clinton campaign when he handed the agency documents that purportedly linked the Trump Organization to a Kremlin-tied bank two months before the 2016 election, according to Fox News.

Sussmann has pleaded not guilty in his case.

The filing was related to the case of Michael Sussmann, a lawyer who worked for Clinton and is accused of lying to the government.

Perkins Coie ​In Durham’s Friday filing, he said Sussmann “had assembled and conveyed the allegations to the FBI on behalf of at least two specific clients, including a technology executive (Tech Executive 1) at a U.S.-based internet company (Internet Company 1) and the Clinton campaign​,” according to Fox News.​

The document adds Sussmann’s “records reflect” that he “repeatedly billed the Clinton Campaign for his work on the Russian Bank-1 allegations.”​

In the filing, Durham said the tech executive in July 2016 worked with Sussmann, an investigative company retained by Law Firm 1 for the Clinton campaign, ​cyber researchers and workers at a number of internet companies to “assemble the purported data and white papers.

“In connection with these efforts, Tech Executive-1 exploited his access to non-public and/or proprietary Internet data,” the filing ​says.“Tech Executive-1 also enlisted the assistance of researchers at a U.S.-based university who were receiving and analyzing large amounts of Internet data in connection with a pending federal government cybersecurity research contract.”

“Tech Executive-1 tasked these researchers to mine Internet data to establish ‘an inference’ and ‘narrative’ tying then-candidate Trump to Russia,” Durham states in the documents, according to Fox News.

“In doing so, Tech Executive-1 indicated that he was seeking to please certain ‘VIPs,’ referring to individuals at Law Firm-1 and the Clinton campaign.”​​

Post requests for comment from several people associated with the Clinton camp were not immediately returned Sunday.. 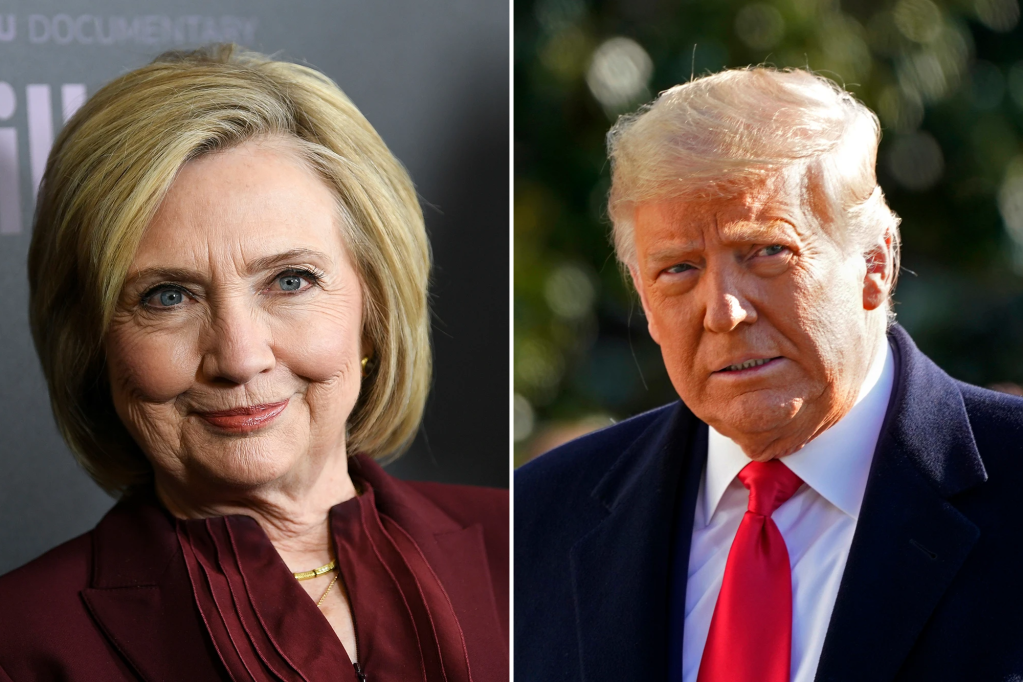