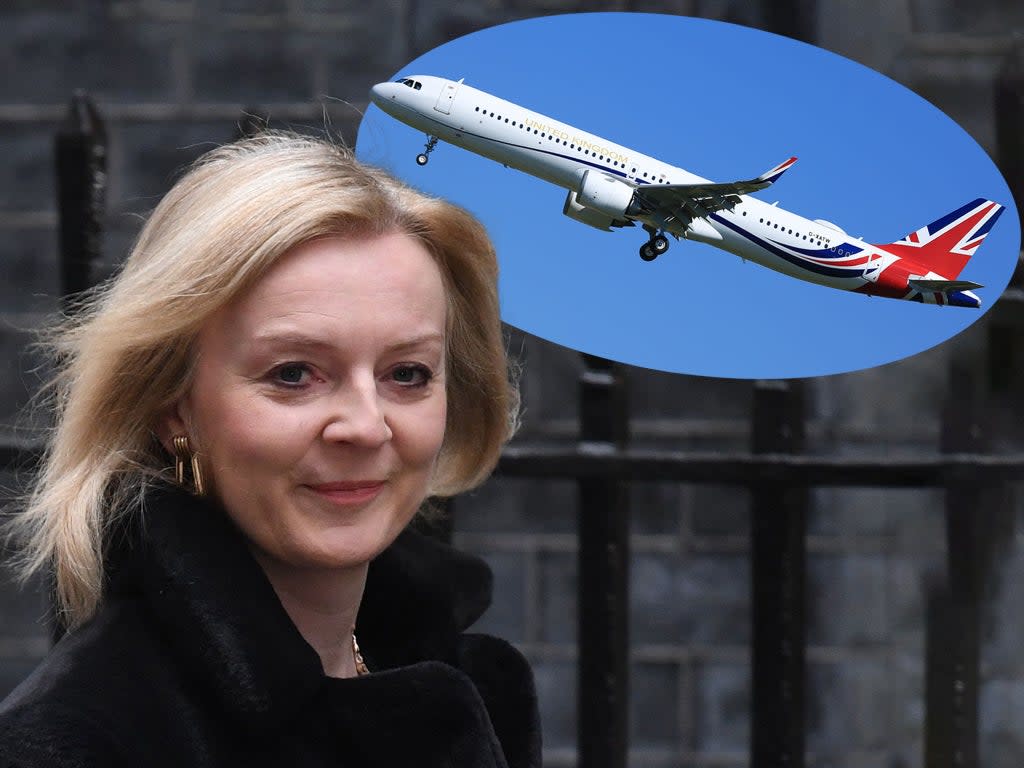 Foreign secretary Liz Truss flew by private jet to Australia at a cost of over half-a-million pounds to the taxpayer because she chose not to use scheduled business-class flights.

Rather than travelling from London to Sydney on one of the daily Qantas departures, Ms Truss insisted on flying the 22,000 miles to, from and within Australia on the private government Airbus A321.

The aircraft type holds 235 passengers on easyJet flights, but the government’s version is kitted out with a VIP interior – including lie-flat beds.

The mission to Australia and back this week burnt an estimated 150 tonnes of fuel and generated nearly 500 tonnes of CO2.

The Ministerial Code makes clear that only the foreign secretary could authorise such a flight.

Scheduled flights were available for the same itinerary, but it is understood the private flight was chosen for ‘security considerations’ amid fears that conversations could be overheard by other passengers.

A leading environmental campaigner has described the foreign secretary’s choice as “an outrageous source of emissions in the current climate emergency”.

Ms Truss began her journey on at noon on 18 January with a flight from London Stansted to Dubai.It took off two hours after the regular Qantas departure from Heathrow , which went nonstop to Darwin in Australia’s Northern Territory and continued to Sydney.

After a 90-minute refuelling stop in the UAE, the foreign secretary’s plane flew overnight to Kuala Lumpur, where it took on more fuel.

Flight XT645, as it was coded, touched down at Sydney shortly after midnight on 20 January – five hours behind the Qantas scheduled flight from London.

The plane sat on the ground at Sydney for two days while the foreign secretary met Australia government officials, before flying across to Adelaide where Ms Truss gave a speech.

Story continues Data recorded by Flightradar24 shows the foreign secretary’s Airbus left Adelaide at 10.50pm the same day.It refuelled at both Kuala Lumpur and Dubai before arriving back at Stansted airport 1.20pm on 23 January.

The commercial alternative was a domestic flight the same evening from Adelaide to Darwin, connecting with the Qantas nonstop to Heathrow – arriving nine hours before the government aircraft.

A senior source from the aviation charter industry told The Independent that the cost of operating Ms Truss’s trip would have been “at least £500k”.

The most expensive business-class ticket for the foreign secretary’s entire itinerary on Qantas, which offers lie-flat beds on board the Boeing 787, would have been £7,712.

The Foreign Office has not disclosed how many officials were on board, but the Ministerial Code says delegations should be kept “as small as reasonably possible”.At least two sets of flight crew were required for the trip.

Anna Hughes, director of the environmental charity Flight Free UK, said: ”Liz Truss has consistently demonstrated her lack of understanding about the action that we all need to take to address the climate crisis, and this is no exception.

“Flying to Australia and back on a chartered jet is shockingly privileged and an outrageous source of emissions in the current climate emergency.”

Ms Truss landed back at Stansted on the day before the Cop26 president, Alok Sharma , told a Chatham House event that world leaders must “honour promises” on climate change.

The cabinet minister said: “Unless we honour the promises made, to turn the commitments in the Glasgow Climate Pact into action, they will wither on the vine.”

Mr Sharma described the Cop26 agreement as “a practical demonstration of Global Britain in action”.

A Foreign Office spokesperson said: “It’s necessary for the foreign secretary to travel abroad to pursue UK interests around security, trade and technology, as she did during this visit to Australia.

“This trip used government transport and was fully within rules set out in the Ministerial Code.”

The plane use by the foreign secretary is an 18-month-old Airbus A321neo operated for the government by the Stansted-based airline Titan Airways.

It was delivered new from the Airbus factory at Hamburg on 26 October 2020..

Fri Jan 28 , 2022
When Paul Tafforeau saw his first experimental scans of a COVID-19 victim’s lung, he thought he had failed.A paleontologist by training, Tafforeau had been laboring with a team strewn across Europe for months to turn a particle accelerator in the French Alps into a revolutionary medical scanning tool. It was […]