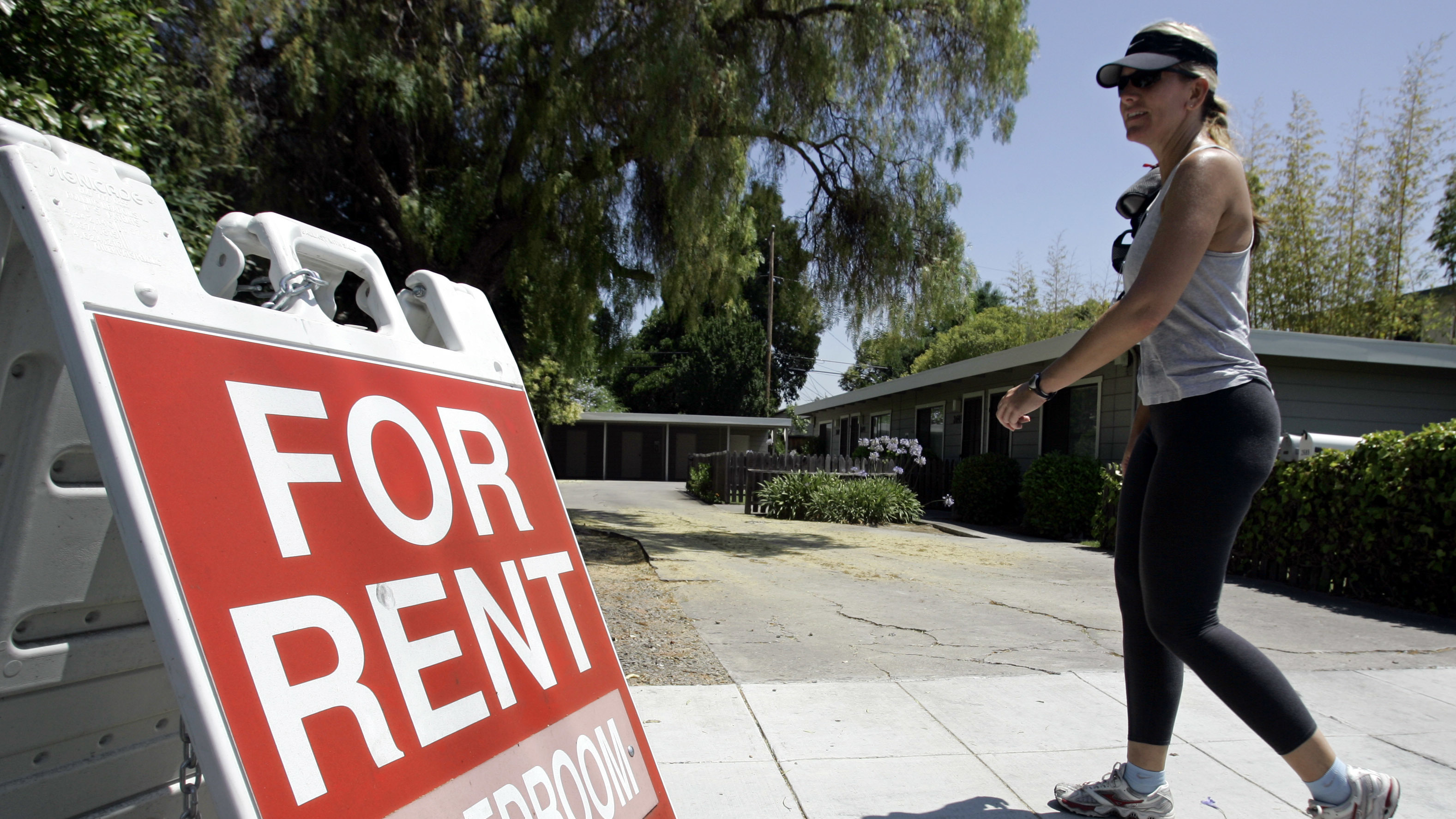 Enlarge this image A for rent sign in Palo Alto, California.Across the country rents are on the rise, in part due to a historic shortage of homes either to rent or buy.PAUL SAKUMA/AP hide caption

A for rent sign in Palo Alto, California.Across the country rents are on the rise, in part due to a historic shortage of homes either to rent or buy.

PAUL SAKUMA/AP Last year, Laura Kraft landed a job in Orlando, Florida.She’d just gotten her PhD in entomology, meaning she studies bugs, and she’d be working on a big nature exhibit at a theme park.All that sounded great until she started looking for an apartment.

“I started looking at rent and was like, not sure if I was going to take the job,” she says.”The rent was so high in Orlando…it really blew me away.”

At first she looked for a place of her own.

But anything in her price range had a waiting list at least 6 months long.So she found a Facebook group for theme park employees looking for roommates in order to afford a place to live.

Laura Kraft in her apartment in the Orlando area.She moved across the country for a new job and couldn’t believe how much it cost to rent a place.Courtesy of Laura Kraft hide caption

toggle caption Courtesy of Laura Kraft “My roommate and I together are paying $2,200,” Kraft says.

“A lot of people that I know have like three, four, sometimes five roommates in a house.”

The cost of renting a place in Orlando rose nearly 30% just last year alone, according to a survey by the real estate firm Redfin.Cities in Florida, New York, and New Jersey are seeing particularly steep jumps in rent.As is Austin, Texas, with the biggest one year gain of 40%.

The survey, it should be noted, tracks new listings for apartments.

“That doesn’t literally mean that every person in Austin is going to see their rent go up 40 percent,” says Redfin’s Chief Economist Daryl Fairweather.

“But it means that if you are on the market right now looking for an apartment or home to rent, the prices will be 40 percent higher than they were the year before.”

Some of the forces driving rents higher differ from city to city.Fairweather says a lot of technology workers have been moving to Austin and the migration of more people there is pushing up both rents and home prices.In New York City, rents are rebounding after falling earlier in the pandemic.

Business The Housing Shortage Is Significant.It’s Acute For Small, Entry-Level Homes But she says rents are rising more than usual just about everywhere.

“The root cause of the problem is a lack of supply,” Fairweather says.”We have not built enough homes to meet demand.”

There a bunch of reasons for that.One of the biggest, she says, is restrictive zoning.

Especially in higher-cost parts of the country, zoning rules make it hard to build cheaper smaller houses or apartments that are tightly packed together.

Meanwhile, Fairweather says more millennials in their late 20s and early 30s feel like they’re done with roommates or their parents’ basement.

“Millennials are the biggest generation,” she says.”We’re forming households, and we want a place of our own and that is causing an increase in demand.”

Redfin’s survey looks at the 50 largest U.S.cities.On average, it found the rents landlords were seeking for available homes and apartments rose 3% in 2020, which is about normal for recent years.

Your Money Home prices rose faster than ever in 2021.The typical home gained $50,000 in value Government data show that the rent Americans are actually paying — not just the change in price for new listings — rose 3.8% over the past year.But, while less dramatic, that consumer price index also shows rents have been rising more than usual the past few months.

Allison Best-VanLiew is feeling the bite of those rising rents up in Buffalo, New York.”It’s been a little wild, to be honest,” she says.

By no stretch is Buffalo a hot housing market historically.Best-VanLiew and her husband have been renting on a busy street for a few years and they pay $900 a month.

“We do not have a dishwasher, which is normally fine.” But she says now they are thinking of having a baby.”The bottles alone, like you kind of need that.”.

Texas Sues Facebook Over Its Use of Facial Recognition - CNET

Tue Feb 15 , 2022
Texas is suing Meta , the parent company of Facebook, over the social network’s past use of facial recognition technology.The suit, filed Monday by Texas Attorney General Ken Paxton , accuses Facebook of violating the state’s privacy laws by capturing biometric data on millions of Texans without properly obtaining consent.”Facebook […]