The Environmental Protection Agency on Tuesday proposed to ban chrysotile asbestos, the most common form of the toxic mineral still used in the United States.Also known as “white asbestos,” it has remained on the market despite decades of research showing that it is a deadly carcinogen, linked to about 40,000 U.S.deaths each year.Chlorine manufacturers and companies that make vehicle braking systems and sheet gaskets still import chrysotile asbestos and use it to manufacture new products.The proposed rule would ban all manufacturing, processing, importation and commercial distribution of six categories of products containing chrysotile asbestos, which agency officials said would cover all of its current uses in the United States.“This is a huge step forward,” said Betsy Southerland, who directed science and technology in the EPA’s Office of Water before retiring in 2017.“We finally are catching up with the rest of the world.”Nearly 70 countries have banned asbestos, a group of six naturally occurring fibrous minerals.

Resistant to heat and fire, they have been used in products as varied as home construction material and automotive parts, fabric, children’s toys and cosmetics.Their widespread use persists despite global scientific consensus that breathing in asbestos fibers is life-threatening and linked to lung cancer.There is even a name, “asbestosis,” for a chronic lung disease caused by inhaling asbestos fibers.Philip Landrigan, who directs Boston College’s global public health program, said fewer American workers are exposed to asbestos today than in the past.But for a few professions — primarily firefighters and maintenance workers who spend a lot of time in old buildings — it remains a significant threat.“Every country around the world that has either banned or reduced asbestos has seen a fall in disease and death,” Landrigan said.However, the trade group representing the chlorine industry, the American Chemistry Council, blasted the proposal in a statement, noting that chrysotile asbestos is used by about a third of U.S.

chlor-alkali plants that produce chlorine.Chlorine is used not only in nearly all public water-treatment systems, it added, but also in most pharmaceuticals and pesticides.“If enacted, EPA’s proposed rule would ban the manufacture of nearly one-third of chlorine and sodium hydroxide chemicals and have significant adverse effects on the supply of the nation’s drinking water,” the group said.“Additionally, EPA’s risk evaluation overestimated potential asbestos exposures, leading to its unjustified risk management proposal.”The EPA estimates that less than 7 percent of the chlorine in the public drinking water supply comes from facilities using asbestos technology.Most of the asbestos Americans have been exposed to is chrysotile, much of which used to come from Canadian mines until the last one shuttered in 2012.Russia now ranks as a major exporter .Michal Freedhoff, who heads the EPA’s chemical safety and pollution prevention, said the proposed ban could benefit both workers handling asbestos and people living near industrial chlorine manufacturing facilities.

The process of making chlorine with asbestos technology is energy-intensive, she said, and burning fossil fuels to power the plants exposes neighbors to soot, nitrogen oxides and other pollutants .An EPA analysis found that if the facilities are required to stop using the asbestos technology, air quality would improve.“You’re reducing the workers’ exposure to a carcinogenic chemical banned in dozens of countries,” Freedhoff said.“But on top of that, by shifting to a more energy-efficient process, you’re also reducing the amount of air pollution people living nearby experience.” Tracking Biden’s environmental policies There are 10 manufacturing plants in the United States that still use asbestos to make chlorine and sodium hydroxide, but EPA officials said their reliance on this technology has declined over time.One of the plants is expected to close this year before the new rule takes effect.

Of the nine facilities that would be subject to the EPA’s ban, six are located in parts of Louisiana or Texas that have large Black and Latino populations and suffer disproportionately high cancer risks from exposure to toxic chemicals .The agency estimates that converting these plants’ production process to newer technology that doesn’t use asbestos would cost about $1.8 billion.In 1989, the EPA blocked most uses of asbestos under the Toxic Substances Control Act, or TSCA.But after the asbestos industry challenged the regulation, a federal appeals court overturned the prohibition two years later.That decision effectively gutted the agency’s ability to ban the toxic mineral, except in a handful of products , such as pipe insulation and a wall-patching compound.

It also turned asbestos into the poster child for the failure of the chemical law, which had such onerous requirements that only five substances were ever banned using its authority.When Congress amended the act in 2016 to remove some of these barriers, President Barack Obama said at the bill signing that the original law was “so burdensome that our country hasn’t even been able to uphold a ban on asbestos — a known carcinogen.”Despite the update, the Trump administration issued a rule in 2019 that limited but did not ban asbestos.

The rule also narrowed its risk evaluation of asbestos to focus only on chrysotile, excluding so-called legacy forms of the mineral that are no longer sold in the United States but persist in older homes and asbestos-tainted soil and water.Health and environmental advocates sued the EPA and won.A federal judge found that the Trump administration’s approach was “arbitrary and capricious” and ordered the agency to comprehensively evaluate asbestos’s risks.The agency could move forward with a rule targeting chrysotile, the court ruled, but would have to broaden its scope and conduct a separate examination including the other types of asbestos.Freedhoff, who as a congressional staffer had helped write the 2016 legislation, joined the EPA’s toxic chemical office last year to put the updated regulations into action.The proposed ban on chrysotile is the first rule the agency has issued under the law since President Biden took office.But if the new law’s authors anticipated a crack down on hazardous chemicals, that may be a long time coming.Before Biden officials can put new restrictions in place, Freedhoff has to reckon with the changes made during the Trump administration.These included efforts to limit the way the government assesses the health and safety risks of certain chemicals, often with results benefiting industry.Trump’s EPA completed risk assessments of the first 10 chemicals that the agency prioritized for enforcement under the updated TSCA.But some of those reviews left out so much information that they have to be revised before the agency can use them to write new rules, Freedhoff said.A second study of the risks posed by other types of asbestos — and products containing asbestos-contaminated talc — is underway, Freedhoff said, with the final assessment expected by December 2024.

It could take another year or two for the agency to issue a rule.That timeline has frustrated health and environmental advocates.The chrysotile asbestos ban is “a landmark step forward,” said Linda Reinstein, president of the Asbestos Disease Awareness Organization.

In 2006, her husband died of mesothelioma, a cancer closely tied to asbestos exposure.“The reality is now we have part one,” Reinstein said.“But anything less than a full ban doesn’t protect public health.” Sign up for the latest news about climate change, energy and the environment, delivered every Thursday.

Wed Apr 6 , 2022
SINGAPORE: While the use of surveillance cameras and facial recognition technology can keep countries safer, they also raise privacy concerns, Senior Minister Teo Chee Hean said on Tuesday (Apr 5). “We need to establish proper guidelines and standards on the use of technology to provide ample protection, and to preserve […] 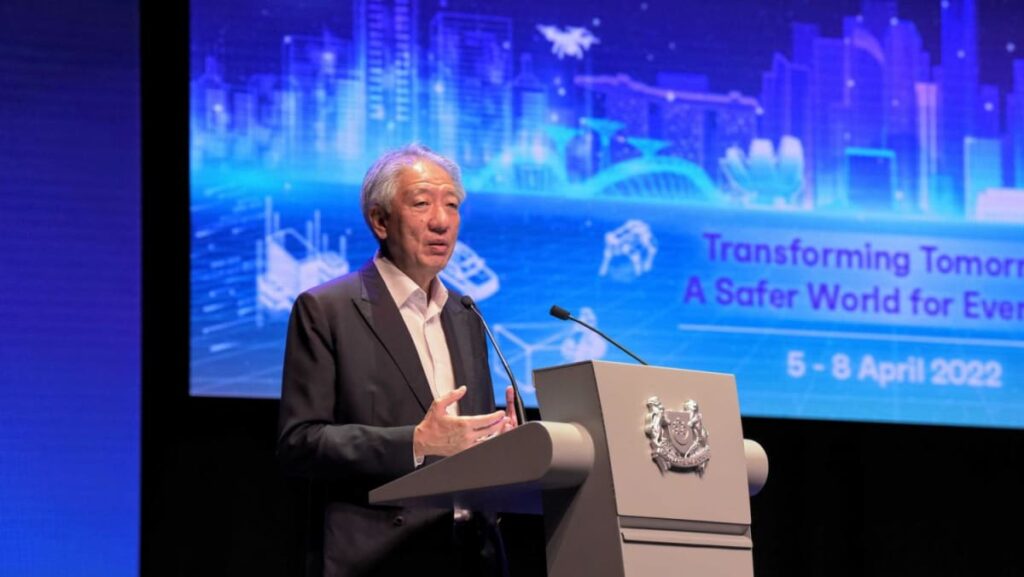