The report by the Environment, Food and Rural Affairs Committee said Covid and Brexit had a huge impact on the sector.

The Department for Environment, Food and Rural Affairs (Defra) said it was “continuing to work with the sector”.

500,000 vacancies Last year, a sudden decline in overseas labour led to more than half a million job vacancies in the food and farming sector, out of a workforce of four million.

Almost a quarter of the UK daffodil crop was left unpicked.Fruit suppliers were forced to leave produce rotting in the fields.

A lack of skilled butchers and abattoir workers meant some 35,000 pigs destined to be made into sausages, bacon and chops were incinerated or rendered – reduced to lard.

When the supply of Christmas turkeys was threatened by a shortage of workers and HGV drivers, the government stepped in and set up a temporary visa scheme.

However the committee heard that industry members had been warning the government since spring 2021 and that this was “too little too late”.It led to a serious impact on animal welfare, food security, and the mental health of workers.

Price rises While the report welcomed “some of the government’s work” it warned that “without fundamental change” the UK was facing “a chain reaction of wage rises, leading to price increases and food production being exported abroad”.

Neil Parish, chairman of the EFRA committee, said: “The government’s attitude to the plight of food and farming workers was particularly disappointing.”

MPs said they were “struck by the government’s failure to grasp the labour issues” and there had been an “unwelcome tendency …to blame the sector for not doing more to tackle the problem or fully utilising the immigration system, on the basis of incorrect information on its own immigration system”.

Image caption, Many UK growers are dependent on seasonal workers to harvest crops Nick Allen, chief executive of the British Meat Processors Association, said the impact of the new post-Brexit immigration regime and Covid had been “crippling”.

“As a result of the conflict in Ukraine, we find ourselves faced with a severe test of the UK’s food security, it’s clear that this approach has allowed structural weaknesses to develop, which have compromised Britain’s food resilience.”

The FDF’s director of policy and corporate affairs, Jayne Almond, said: “Compounding the inflationary pressures on UK food and drink manufacturers, many businesses continue to struggle with systemic labour shortages.”

And the National Farmers’ Union president Minette Batters said her union was calling for a review of the immigration system, including the seasonal workers’ visa scheme.

She said: “Today’s report from the Efra committee backs up the NFU’s long-standing call for a more enabling immigration policy which mitigates against the crippling labour shortages and structural issues that have existed throughout the food supply chain for many months.”

The new report calls for a “radical rethink” of labour strategy, including a review of the skilled workers visa scheme; and for the seasonal workers pilot visa scheme to be made permanent.

It also said there should be a ‘tailoring’ of the English language requirement to the “needs of the industry”.This could mean less stringent testing for some workers.

Longer-term, home-grown talent should be “nurtured”, said the MPs, alongside the development of new technology.

In a statement, Defra said it was looking at how new technology could be used in the sector.

It added: “We fully acknowledge that the food and farming industry is facing labour challenges and we continue to work with the sector to mitigate them.

“We have given the industry greater certainty by enabling the seasonal workers scheme until the end of 2024, allowing overseas workers to come to the UK for up to six months to work in the horticulture sector.

“Our new points-based immigration system also expanded the skilled worker route to many more occupations, including butchers, who can now be recruited from anywhere in the world.”

The newest meatless meat is made from air - CBS News

Thu Apr 7 , 2022
San Mateo, California — A California startup is doing its part to cut down on greenhouse gas emissions by creating a new kind of “meat” that’s made from air. CBS News was given an exclusive sneak peak at a product that physicist Lisa Dyson says has the taste and texture […] 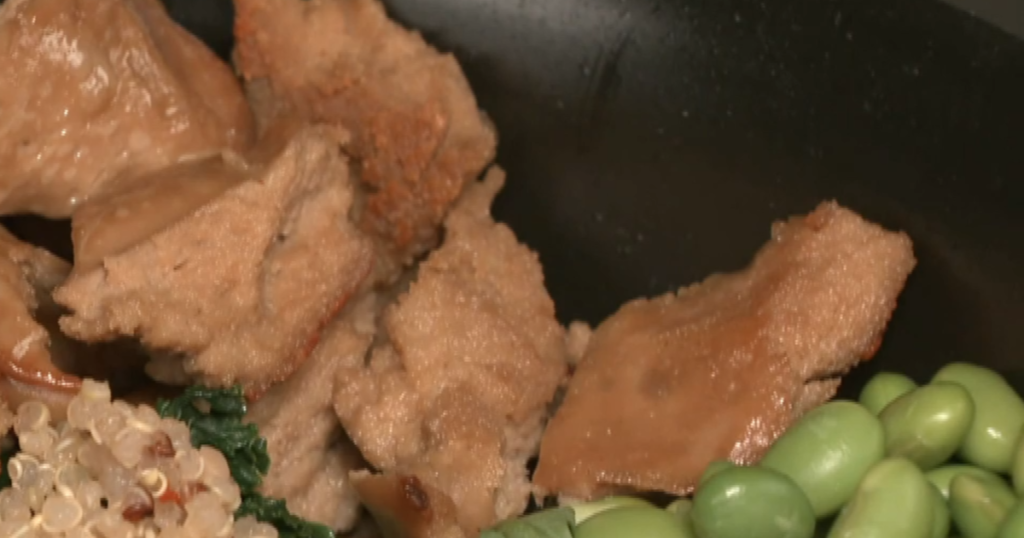