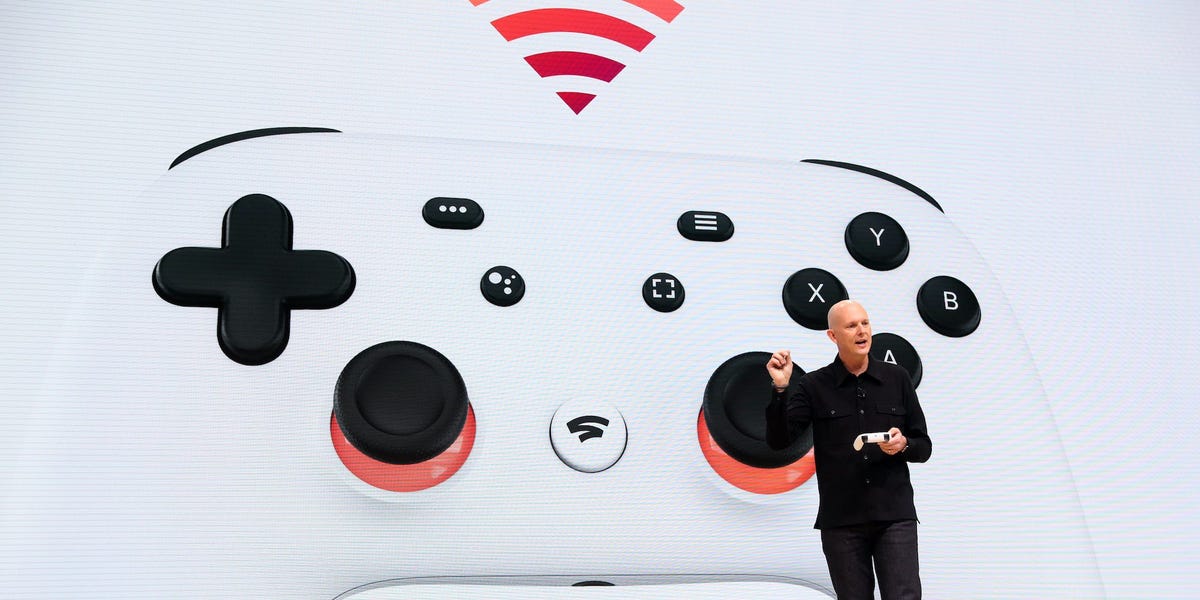 A year ago, Google announced it would close its internal Stadia game studios.It has since worked to land white-label deals with partners such as Bungie and Peloton.Increased consolidation of the gaming market poses challenges to Google’s plan.When Google announced last year that it was shutting down its internal gaming studios, it was seen as a blow to the company’s big bet on video games.

Google, whose Stadia cloud service was barely more than a year old, said it would instead focus on publishing games from existing developers on the platform and explore other ways to bring Stadia’s technology to partners.

Since then, the company has shifted the focus of its Stadia division largely to securing white-label deals with partners that include Peloton, Capcom, and Bungie, according to people familiar with the plans.

Google is trying to salvage the underlying technology, which is capable of broadcasting high-definition games over the cloud with low latency, shopping the technology to partners under a new name: Google Stream.

(Stadia was known in development as “Project Stream.”)

The Stadia consumer platform, meanwhile, has been deprioritized within Google, insiders said, with a reduced interest in negotiating blockbuster third-party titles.The focus of leadership is now on securing business deals for Stream, people involved in those conversations said.The changes demonstrate a strategic shift in how Google, which has invested heavily in cloud services, sees its gaming ambitions.

Last year, Google entered conversations with Peloton to be a back-end provider for games running on the fitness company’s bikes, three people familiar with the situation said.

Peloton unveiled the first of those games , titled “Lanebreak,” in summer and ran a closed demo late last year that was supported by Google’s technology.

Google last year also pitched its technology to Bungie, the developer behind the “Destiny” franchise, which was exploring a streaming platform of its own, according to three people familiar with the discussions.Under the proposal, Bungie would own the content and control the front-end experience, but Google would power the technology that beamed the games to users’ screens.

Sony has a deal with Microsoft to support its cloud gaming service.A spokesperson for Bungie did not respond to a request for comment.

While Google’s branding was nowhere to be seen, AT&T confirmed the game was running on the Stadia technology.

The company has discussed a similar deal with Capcom, the publisher of the popular “Resident Evil” franchise, in which Capcom would run demos for new titles on its website powered by Google’s tech, insiders said.

A good internet connection enables Stadia to process high-quality graphics.INA FASSBENDER/AFP via Getty Images Google has continued to prop up the Stadia consumer platform with a steady stream of titles.After Google closed Stadia’s internal game studios, known as Stadia Games & Entertainment, insiders said the directive was to build out what was internally dubbed a “content flywheel” — a steady flow of independent titles and content from existing publishing deals that would be much more affordable than securing AAA blockbusters, two former employees familiar with the conversations said.

“The key thing was that they would not be spending the millions on the big titles,” one said.”And exclusives would be out of the question.”

Executives and employees for the Stadia product have also shifted roles.Phil Harrison, the former PlayStation executive Google tapped to run its gaming operations, now reports to the company’s head of subscriptions.

Patrick Seybold, a Google spokesperson, told Insider in a statement: “We announced our intentions of helping publishers and partners deliver games directly to gamers last year, and have been working toward that.The first manifestation has been our partnership with AT&T who is offering Batman: Arkham Knight available to their customers for free.

“While we won’t be commenting on any rumors or speculation regarding other industry partners, we are still focused on bringing great games to Stadia in 2022.With 200+ titles currently available, we expect to have another 100+ games added to the platform this year, and currently have 50 games available to claim in Stadia Pro.”

Phil Harrison pitched Stadia as ‘the future of gaming.’ Now, he’s trying to save it.

Google wasn’t the first company to move into cloud gaming, but it pitched Stadia as a revolutionary platform, capable of pumping AAA titles to users’ living rooms and portable devices without expensive hardware.The experience would be seamless: Someone could watch a game being played on YouTube and jump into it with the click of a button, as long as they had a good internet connection.

Stadia’s core technology has been widely praised — even as the platform it supports gets tepid reviews — and Google is trying to extract as much value from it as it can.Internally, some employees have floated the idea of using Google’s technology for nongaming purposes, such as 3D modeling and other high-intensity tasks that could be performed over the cloud.

But the pivot in strategy also led to a stream of employees exiting Stadia last year, including executives.

Harrison has also moved back to his home of London.He had been in California since 2018, working from Google’s Mountain View headquarters.

Google’s 2018 hiring of Harrison, a PlayStation and Xbox veteran, signaled the search giant was preparing to make a big splash in video games.He joined Google CEO Sundar Pichai onstage at the Game Developers Conference in San Francisco the following year to unveil Stadia, promising users access to to a library of exclusives and established franchises that would all be beamed over the cloud.

But when Stadia launched just a few months later, it was missing several key features.Bloomberg reported that there were tensions between employees who wanted to present Stadia as a beta test and leaders who wanted to follow a more traditional console launch.

Google also struggled to hold on to users.Harrison and other executives set a goal to reach 1 million monthly active users by the end of 2020, which they missed by about 25%, according to a person familiar with the conversations.”Retention was a real problem,” this person said.

Meanwhile, Google was operating in an increasingly challenging industry.

When Microsoft announced in 2020 that it would acquire the “Elder Scrolls” studio Bethesda, it “scared the crap out of Google executives,” a former employee close to those conversations said.After Stadia shuttered its in-house games division, insiders said any appetite among Google executives to own any studios completely went away.It also had trouble luring studios to develop for the platform; some gaming execs previously told Insider that Google would offer rates “so low that it wasn’t even part of the conversation.”

Consolidation in the industry has continued.This month, Microsoft announced it would also buy Activision , the creator of the “Call of Duty” franchise, for $68.7 billion.

The mammoth merger — the biggest ever in video games — takes yet another major publisher off the field.PlayStation’s CEO said after its purchase of Bungie that the industry would likely make more high-profile acquisitions.

Google continues to bolster the Stadia consumer platform with new games but few that are on the AAA level gamers were promised, and some customers have grown frustrated by what they see as a lack of communication from Google.

The company spent tens of millions of dollars early on to secure blockbuster titles for Stadia, including Rockstar Games’ “Red Dead Redemption 2.” Last year, Rockstar released a remastered version of three of its older “Grand Theft Auto” titles across multiple platforms.There has been no mention of the game coming to Stadia.

Increased consolidation in the market risks squeezing Stadia’s consumer platform and could make it harder for the company to spark deals with large game developers and publishers for games on Stadia and white-label opportunities.

“The Stadia cloud tech is great.The question is how to make that tech work for partner publishers that may not want to develop their own tech but also wish to have its own branded service,” Mat Piscatella, an NPD analyst, said.”But the big questions are how many of those publishers will there be if and when cloud gets mass-market traction and how could the economics work?”

Current and former employees said the priority was now on proof-of-concept work for Google Stream and securing white-label deals.One estimated about 20% of the focus was on the consumer platform.

“There are plenty of people internally who would love to keep it going, so they are working really hard to make sure it doesn’t die,” they said.

“But they’re not the ones writing the checks.”

Are you a current or former Google employee? Got a tip? Contact reporter Hugh Langley at [email protected] or via the encrypted messaging apps Signal and Telegram at +1 628-228-1836.Reach out using a nonwork device.

It would be so satisfying if corporations and brands more of

Sat Feb 5 , 2022
It would be so satisfying if corporations and brands more often called out racism and other ills in their comments sections on social media.In the responses to a recent Xbox post on Facebook, it appeared at first glance that the console-maker had done exactly that.And while it’s not quite what […] 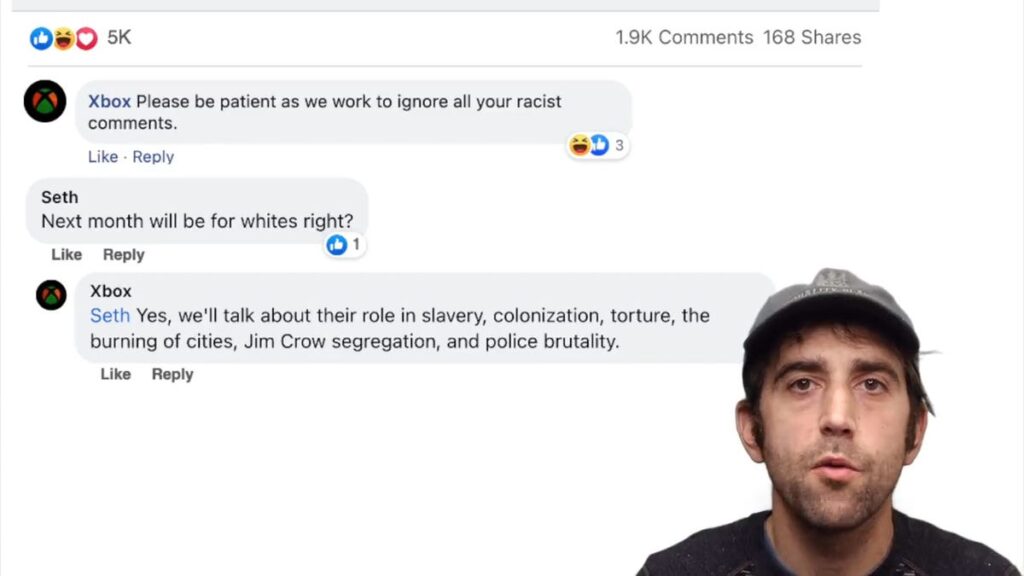