D.C.Mayor Muriel E.Bowser said Monday she is dropping the city’s requirement that people show proof of coronavirus vaccination before entering many businesses in the city, as coronavirus transmission continues to trend downward throughout the region.The District’s requirement for residents to show proof of vaccination to enter most businesses — announced in December — will cease Tuesday, said Bowser (D).She also said she’s allowing the city’s mandate to wear masks in all indoor public spaces to be lifted starting March 1.Bowser had rescinded the indoor masking mandate in November before the surging omicron variant spurred her to bring it back .Bowser’s decision to end the short-lived vaccine requirement was met with pushback by some residents and D.C.Council members Monday, at least one of whom questioned what specific metrics motivated the move.Others called the move premature, adding that it could increase health risks for immunocompromised residents while potentially discouraging people from patronizing businesses if they felt safer with the mandates in place.Despite the change, D.C.Health Director LaQuandra Nesbitt said officials are still advising residents to wear masks indoors.

And masks will still be required in some congregate settings, such as schools, public transit and emergency shelters, Bowser said.D.C.

government and health-care employees will still be subject to a vaccine requirement specific to those workers.A council bill mandating eligible students be vaccinated will still go into effect in March, Bowser said, though enforcement will not begin until the next academic year.Bowser’s decision to end the mandates comes amid mounting economic and political pressure on the region’s leaders to loosen pandemic restrictions .While several states and cities relaxed indoor or in-school mask rules last week, many jurisdictions that enacted vaccine mandates still have them in place.

In Maryland, Gov.Larry Hogan (R) announced Monday that masks will not be required in state buildings starting next week.As city officials have mulled how to balance residents’ safety with the desire to return to normalcy, Bowser, who is running this year for a third term in office, has repeatedly said the city will enact and ease restrictions depending on the course of the virus.Bowser and Nesbitt said Monday the vaccine mandate had achieved its desired effect: The city administered over 50,000 vaccinations within three weeks of the announcement of the vaccine requirement in late December, half of which were first or second doses.

Nesbitt said that number of new vaccinations has been trending downward in the past few weeks.According to city data, more than 93 percent of residents have had at least one dose of the vaccine.“We also know that people who have been vaccinated and others are wanting to get back to their normal lives and know what they need to do to keep themselves safe,” Bowser said.

“But really getting vaccinated and boosted, we can’t emphasize enough.” Pressure mounts on D.C.-area leaders to drop local mask mandates The announcement was met with mixed reactions Monday from lawmakers, residents and members of the business community.Sabrina McCormick, an environmental and occupational health professor at George Washington University, said the differing opinions highlight the complexity of “how to transition from really being in a pandemic to being in an endemic.”Kathy E.Hollinger, president and chief executive of the Restaurant Association of Metropolitan Washington, said the association was “pleased” with Bowser’s decision to lift the vaccine mandate.Doing so “will allow more flexibility for local businesses to determine what makes the most sense for the health and safety of employees, guests and operations,” she said.Darren Norris, owner of the bar Death Punch and Shibuya Eatery in Adams Morgan, was surprised to hear the vaccine mandate was ending so soon.

Under the mandate, customers needed to prove they had at least one vaccine dose by Jan.15.The requirement for two doses would have taken effect Tuesday.Staffers at the bar and restaurant had settled into asking patrons for a vaccine card, Norris said, adding that he’d heard that some guests said knowing that everyone in the building was vaccinated made them feel more comfortable.Norris said he was not sure whether his business would continue requiring proof of vaccination without the city requirement.But he said that the mandate felt like a good move that encouraged people to get vaccinated — and that he even knew of a few people who got vaccinated specifically to comply.“I think it was important that it happened,” Norris said.

“And I think it helped overall.”Meanwhile, some Republican members of Congress accused Bowser of making a politically motivated decision to lift the mandate.And several members of the City Council voiced concern and frustration with Bowser’s decision, including Brianne K.Nadeau (D-Ward 1), who tweeted , “Why would we give up on vaccines when we have come this far?” ‘Follow the science’: As the third year of the pandemic begins, a simple slogan becomes a political weapon “As a [council member], and a parent of 2 kids under 5, I am flabbergasted and angry,” she wrote, adding: “Why are we not protecting the workers in these industries? Why are we telling parents we don’t care if they participate in society?”Council member Robert C.White Jr.(D-At Large), who is challenging Bowser in the upcoming mayoral primary, similarly took to Twitter to express his discontent.“The vaccine mandate is working,” he wrote.”Cases are just starting to go down and ending it now is premature.

The vaccine mandate made it possible for many families, including mine, to feel a little comfort and calmed the anxiety of frontline workers and immunocompromised folks.We need responsible leadership that centers the needs of our most vulnerable residents instead of trying to score political points.”Council member Trayon White Sr.(D-Ward 8), who is also running for mayor, on Thursday had called on Bowser to drop the vaccination requirement, writing in a now-deleted tweet that the mandate was “killing our local restaurants and business establishments.”In making the decision, Bowser said, she and other health officials considered the city’s case rate and hospitalizations and vaccination levels, but her administration has been reluctant to tie restrictions to any specific threshold.Asked Monday whether it was premature to ease restrictions, considering the unpredictable nature of the virus, Bowser said simply, “It’s not.”“What we know is we have to be nimble,” Bowser said.“I don’t think any of us can say here there won’t be other variants that would require us to do something different.”The District’s weekly coronavirus case rate per 100,000 residents was about 253 on Friday; it was about 1,300 per 100,000 residents just before Christmas when Bowser first announced the vaccine requirement.D.C., along with every state, is still facing what the Centers for Disease Control and Prevention defines as “high” transmission — or a weekly case rate above 100.“From a public health perspective, ideally we’d like us to have low to moderate transmission,” Nesbitt said.

She added that D.C.Health will continue to recommend that people wear mask indoors until the city reaches low to moderate community transmission.Bowser also said Monday that the coronavirus testing at city firehouses, which has been in place since 2020, will end Feb.26.Residents can still get tested at any of the eight “ Covid Centers ” the city has set up.Neighboring jurisdictions also are cutting back on pandemic restrictions.Explaining his decision to drop Maryland’s mask mandate, Hogan said the state’s health metrics warranted the change, noting that hospitalizations have declined by 78 percent from last month’s peak.The move follows Hogan’s advocacy last week pressing school officials to drop classroom mask mandates.A union representing state workers said Hogan’s move to drop the mask mandate “makes no sense” given Maryland’s pandemic numbers.“Hogan’s decision to cancel masking inside of state facilities puts the public and frontline workers at risk, especially those in congregate care facilities with no opportunity to social distance,” American Federation of State, County and Municipal Employees Council 3 President Patrick Moran said in a statement.

“Rather than following the advice of our public health experts, the governor is creating chaos and prolonging the pandemic by increasing the risk for frontline heroes.”Despite the rapid drop in new cases, a lot of virus is still circulating in the region.Maryland still faces high transmission, according to the CDC, with a seven-day average of 128.8 new cases per 100,000 residents.Erin Cox contributed to this report..

Tue Feb 15 , 2022
JALANDHAR: Prime Minister Narendra Modi on Monday said that the BJP-led alliance will form the next government in Punjab and a new chapter of development will start in the state. He also hit out at the Congress government in Punjab, saying he wanted to pay obeisance at the Devi Talab […] 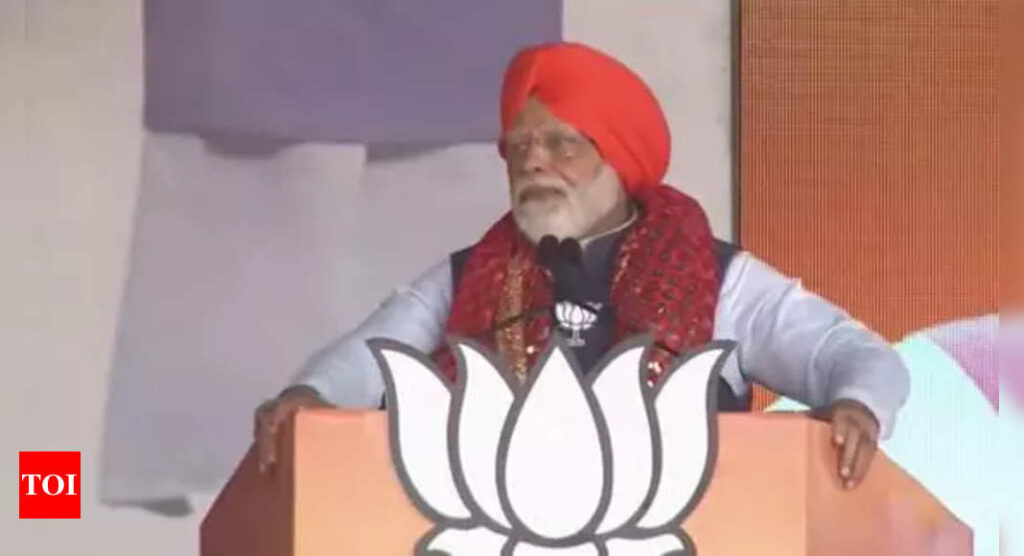