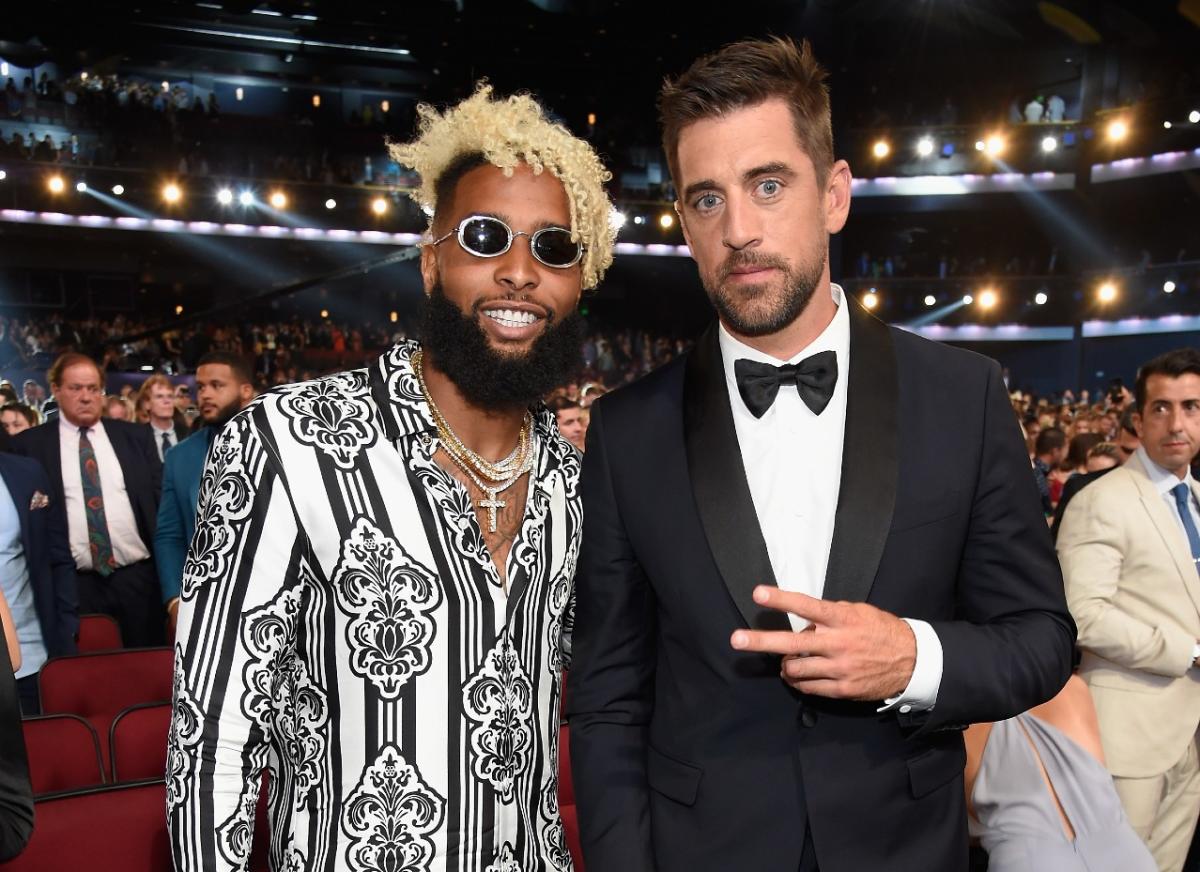 Last November, when cryptocurrency was skyrocketing to new heights and Bitcoin was one of the red-hot financial vehicles of 2021, the mobile payment service Cash App grabbed some trending headlines through partnerships with two headlining NFL names: Green Bay Packers quarterback Aaron Rodgers and Los Angeles Rams wideout Odell Beckham J r.The significance? Both players endorsed Bitcoin and announced plans to take portions of their 2021 salaries in the cryptocurrency during a month when Bitcoin would hit an all-time high of $68,906 per coin.The plot twist? As often happens with volatile currencies and investments, a 10-week hemorrhage took Bitcoin from that November peak to a nearly 52 percent dive, reaching a January bottom of $33,076 early Monday morning.If ever there were a case of buyer beware with the products athletes endorse, this would be it.

Most especially when that “product” is actually an extremely volatile form of currency that can cost investors massive sums of money.It’s a worthy topic of interest this month, given Bitcoin’s slide.

After all, the peaks aren’t the only thing drawing the big headlines.

As it turns out, the valleys do, too.Especially when so many athletes are openly beating the drum for something that carries so much financial risk, to the point of declaring their own skin in the game by way of converting hundreds of thousands of dollars — or even millions — into something like Bitcoin.Now, before we get into all that, it’s worth noting: Unless they show us, there’s no way to know precisely how much athletes like Rodgers or Beckham Jr.might have gained or lost with their Bitcoin dalliance.There will be a lot of assumptions, but the simple truth is nobody here is staring at their financials.Instead, people are doing some basic math and then speculating it’s correct.But aside from what Rodgers or Beckham Jr.

or any other player might have gained or lost with the latest crypto plunge, the underlying, rising marriage of fiscal volatility and athlete endorsement is interesting.Frankly, these “products” sometimes feel like a very close cousin to betting.That’s not to place any responsibility on athletes for what people might gain or lose by taking their endorsements to heart, of course.Adults are adults.

They do what they want with their money.But when it comest to financial investing, everyone should take it with a grain of salt when athletes promote currencies or currency trading platforms.(See: Tom Brady and Stephen Curry stumping for the FTX Exchange.) The reality is, the vast majority of people don’t truly understand how cryptocurrency works — let alone the kind of risk factors that can cause Bitcoin to dump 52 percent in 10 weeks.And that group also includes some of the athletes who have advisors paid to guide their investments, as well as business managers or agents who are paid to find commercial opportunities with businesses like Cash App, FTX Exchange, etc.Hopefully everyone steers clear of the assumption that just because athletes are investing in something or endorsing it, that makes it a smart investment.Most especially when it comes to cryptocurrency, which can either be remarkably lucrative when investments or transfers occur at the right moment, but also swing to remarkably damaging in a very short period of time.

That’s part of what makes athlete endorsements fascinating in this space, because it’s occurring more frequently in the short term, but also outside of the norm in the longer vantage of sports history.

This isn’t selling an insurance company or a can of soup.It’s a way of leveraging your financial health on an investment that significantly impacts your life.Over the years, you simply didn’t see many athletes hawking unstable financial investments to mainstream America.But now you do, largely because the companies that thrive on cryptocurrency and its related products see athletes as a sturdy relationship to leverage with everyday people.And that’s what these companies and the overall cryptocurrency community are aiming for: reaching a point where digital currencies like Bitcoin are adopted by Wall Street, Main Street and everything in between.

That’s what has continually made athletes news when they showcase their plans to adopt something like Bitcoin.It can be influential with the masses, generating big headlines when Bitcoin investments have been made by offensive tackle Russell Okung , New York Giants running back Saquon Barkley , Rodgers, Beckham Jr.and others.Not to mention players like Brady and Jacksonville Jaguars quarterback Trevor Lawrence also announcing that they’re dipping into some aspect of digital currency endorsements.For the many companies that are collectively making billions of dollars off of cryptocurrency transfer fees, these kinds of endorsements make sense.

They want more people on their platforms trading dollars for Bitcoins.

And one way to do that is to cut a deal with star athletes and get them to send exactly that lucrative message: “I’m into Bitcoin” or “Use this crypto trading platform to be on the cutting edge.” These messages resonate, whether it’s Brady on a commercial or Rodgers and Beckham Jr.on their Twitter accounts.Brady’s FTX Exchange commercial — titled “Tom Brady is in.Are you?” — was on a continual loop during NFL games this season.It resonated on social media.The day it first aired, Google searches for the term “FTX” spiked to an all-time high the first week that Brady’s commercial ran.

It spiked to another all-time high in October, when another new commercial with Brady debuted.That’s not a coincidence.Brady’s endorsement matters.As for Rodgers and Beckham Jr., their “Bitcoin as salary” announcements were both tentpole public relations moments for the cryptocurrency community, pushing crypto into trending topics across social media.First on Nov.1, when Rodgers tweeted a promotional video for Cash App to his 4.5 million followers, declaring: “Bitcoin to the moon” while wearing a John Wick Halloween costume.

And then for a second time when Beckham Jr.did a similar video spot for his 4.2 million Twitter followers with the pronouncement, “It’s the start of a new era.

I’m looking forward to the future.That’s why I’m taking my new salary in Bitcoin thanks to Cash App.” The response to both tweets was massive — each instantly became one of the most engaged posts in the history of both their Twitter accounts.As of Monday, Rodgers’ tweet had more than 116,000 replies, 18,000 retweets and 68,000 likes.Beckham Jr.’s touted nearly 10,000 retweets, 12,000 quote tweets and more than 34,000 likes.

Both moments also grabbed headlines on virtually every major sports, news and financial platform.The reaction was both predictable and by design for Cash App, which was striving for more people trading crypto on their platforms, generating more fees and more profits.

That’s business end of it.Except the investment that got endorsed is directly tied to a specific cryptocurrency that’s plummeted since.Not that you’d know it, because there are no follow-up videos for that.And therein lies the rub.

You can look at what Rodgers and Beckham Jr.and Brady and others are endorsing and treat it like it’s the same as some auto insurance or a high-sodium meat sandwich from a chain restaurant.Or you can look at it and recognize that it’s something totally different and far more dangerous, something that can quickly impact the everyday lives of people who engage in the investments backed by athletes who don’t even fully understand them.People who pay others to understand them.

Clearly this is trend isn’t making athletes skittish.But it should make you think twice about whether or not someone like Aaron Rodgers can be trusted to give you sound (and paid-for) investment predictions like “Bitcoin to the moon” and “we can go to the moon together.” When it comes to that particular declaration, the last 10 weeks have not delivered Bitcoin holders to the moon.

Especially the ones who buckled in after Rodgers’ endorsement in November.If you’re surprised by that, consider getting your guidance from somewhere else..

Melania Trump auctions off her hat, and has become the latest victim of the cryptocurrency crash

Wed Jan 26 , 2022
(This article has been updated to reflect that the auction, which was offline for part of Tuesday, is back online.) Melania Trump began 2022 by announcing she’d be auctioning off a hat, along with two other items, for the low, low starting bid of $250,000.Get the full experience.Choose your plan […]