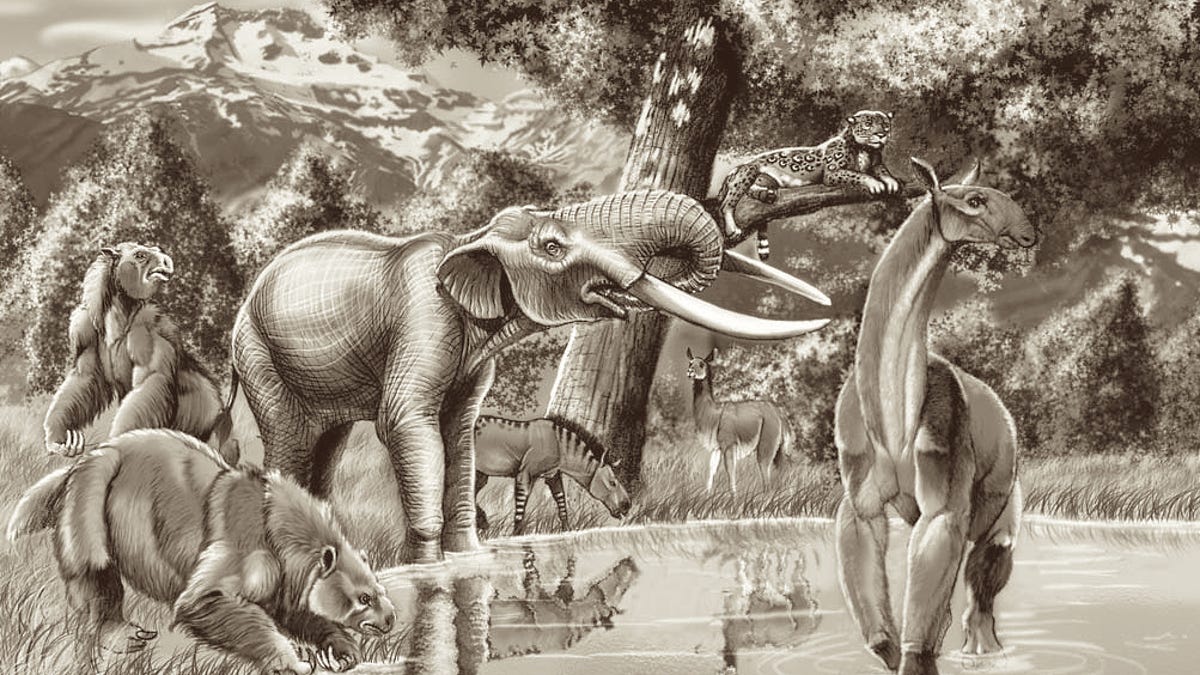 Its tusks were thick and relatively straight; its ears broad and leathery.Its nimble trunk could reach over the heads of giant ground sloths and huge armored glyptodonts to pluck leaves high up in trees.Wide, column-like legs supported 6 tons of weight.But don’t call it an elephant.nnnWhile people easily recognize its northern relative, the woolly mammoth, almost no one is familiar with the not-so-hairy Notiomastodons.Yet, this ancient proboscidean—an order of mammals which tend to have a proboscis, or trunk—was ubiquitous in South America during the Pleistocene, which stretched from some 2.5 million to 11,000 years ago.nnNotiomastodon platensis fossils have been uncovered at hundreds of sites throughout South America.It was so common, in fact, that Dimila Mothé, a paleontologist at the Mastozoology Lab and post-doctoral researcher at the Federal University of Rio de Janeiro, was emphatic during a video interview.nn“Proboscideans,” she said, spreading her arms wide for emphasis,“were everywhere, like modern elephants in Africa.

Notiomastodon was everywhere!”nnEverywhere in South America, but, intriguingly, nowhere else.And while mammoths and mastodons lived and migrated all over North America, neither species have been found south of Panama.

Why mammoths and mastodons never made it to South America, but gomphotheres such as Notiomastodon did, are questions that currently remain unanswered.We have so much yet to learn.nnThat’s why the recent successful extraction of ancient DNA from a Notiomastodon fossil, described in a paper published this month, is incredibly significant.The paper is one of three in a series of firsts, all offering increasing insight into Notiomastodon platensis.nnAncient DNA isn’t expected to survive in warmer climates.Its degradation begins the moment of death, and, unless frozen, preservation was (and still largely is) presumed highly unlikely.Which makes the work of Sina Baleka, paleogeneticist now at McMaster University, Mothé, and their colleagues singularly outstanding.Obtaining ancient DNA from an approximately 35,000-year-old Notiomastodon in Uruguay is no easy feat.nnAncient DNA enabled them to further define the phylogeny—the family tree—of ancient proboscideans, an important first step in unraveling when and why some species survived, while others did not.

Their work suggests that Notiomastodon is more closely related to elephantids than true mastodons.On the surface, elephantid and mastodont skeletons might look remarkably similar, but their teeth reveal one of the biggest morphological differences.

Elephantids have teeth that resemble the footprints we’ve seen on the Moon; mastodons have teeth with cusps and roots that look vaguely similar to our own.These structures reflect their general diets: One may have ground more grasses within their mouths, the other may have needed to chomp and crush twigs and branches.Ultimately, mastodons didn’t make it.Elephantids, on the other hand, evolved into the animals we share Earth with today.It’s important research for those who study proboscideans, but this has caused some confusion among those who don’t.nnIn a video interview, Mothé mentioned seeing a Twitter post after the paper was published in which someone declared, “Notiomastodon is an elephant!”nn“No,” she was quick to assert, “it’s not.”nnNotiomastodons are part of a distant sister lineage to the one that eventually became the modern elephant.Notiomastodons and today’s elephants shared a common ancestor more than 10 million years ago.We don’t completely understand why Notiomastodons and other ancient proboscideans disappeared, although scientists believe a variety of factors, including the changing climate at the end of the last ice age, contributed to their extinction.Some argue that human overhunting was responsible for their demise.nnMothé’s unpublished thesis, done entirely by studying the morphology of ancient proboscideans, pointed to the same results she and her colleagues found using ancient DNA—a result, she said, that didn’t surprise her.

“When you see only the molecular tree [in the paper], I clearly see the same results of my thesis: That Notiomastodon belongs to a lineage that is closely related to the same lineage of elephantids.”nnnThis is not the first time Baleka has been able to surpass the ancient DNA odds.Last year, she was also involved in work that successfully sequenced ancient DNA of Palaeoloxodon cf.mnaidriensis, a dwarfed form of straight-tusked proboscidean, from fossils in Sicily.nnThese are remarkable achievements, but Baleka attributes her stand-out success, she said in a video call, to the fact that “hardly anyone else bothers trying.The amount of work and money invested might very likely not pay off.

When I’m trying to extract ancient DNA, it’s with samples that are extremely challenging.It’s just hit-and-miss.You just have to try.Most of them don’t work.” But a tiny few do.

And that’s when, she explained, all that effort pays off.nnBaleka’s hopes for future ancient DNA techniques do not necessarily push how far back we can go, but rather the locations from which we can successfully obtain DNA.nn“A lot of the DNA that we have is from permafrost,” she explained.Often, it’s colder regions in Eurasia and North America.She would love to be able to analyze DNA from animals that once lived in today’s warm climates.nn“We have amazing biodiversity hotspots in these warm regions,” she continued.“We just don’t have that in the colder ones.

So if we actually manage to get DNA out of these regions, I think that would [produce] a lot of interesting new discoveries.”nnCo-author Mothé was also part of a team that recently described the first evidence of fossilized oral bacteria in proboscideans, using Notiomastodon fossils.Much like in our own mouths, plaque can build up on a tooth, creating dental calculus.Because dental calculus has the potential to preserve remnants of what an animal was eating, pathogens, and ingested dirt, this opens yet another window to study megafaunal diet and paleoecology.She gave a presentation about this research last October during the 8th International Conference on Mammoths and Their Relatives, hosted virtually by the Indian Institute of Science.nnPrior to this paper, dental calculus was assumed to be cementum in ancient proboscideans.nnn“Cementum is a natural tissue that we all have,” she said, explaining that the dental plates of elephants and mammoths are stuck together by cementum.

“Cementum is natural for the lophodont teeth [of elephants],” but not for the signature cusp-y teeth of Notiomastodons.It’s what led her to question the initial assumption about cementum.nn“Proboscideans had huge teeth; the dental calculus is also huge!” She indicated that some fossil specimens she studied produced about a small plastic bag’s worth of dental calculus, estimating it at about 50 grams.nn“If there is dental calculus, it’s because there were bacteria there.There is no possibility of occurrence of dental calculus without bacteria.”nnWhich means, she and her team concluded, that ancient proboscideans may have suffered from a number of oral diseases, including halitosis.nnBad breath aside, Mário A.T.Dantas and colleagues offered more insight into the diet of two Notiomastodons in Brazil in a paper detailing the first stable isotopic analysis of the species’ tusks within that country.This is significant, as tusks reveal annual information about an animal’s life.

Although a number of papers have revealed Notiomastodon diet through other techniques, this is the first to document annual fluctuations.nnFragmentary tusks donated by local people enabled them to date and uncover six years of the lives of these two animals.One fossil was approximately 17,381 years old; the other, a surprising estimated 9,229 years.That date makes it the youngest record of an ancient proboscidean in Brazil, placing its existence within the current Holocene epoch.The older animal seemed to have lived in a drier environment, one that—at least for the years available within the tusk fragment—seemed relatively stable.

The younger animal endured rapid changes.It lived in a wetter environment and ate a varied diet of grasses, fruits, and leaves.nnDantas explained in an email that when animals eat plants with less water in their tissues, it compels that animal to drink more water to compensate.As a result, the oxygen isotopes within the animal act as a kind of environmental thermometer.In this case, they indicated a warmer climate.nnn“It gives us information about the daily life of these animals,” renowned mammoth expert Dick Mol, who was not involved in this research, said in a video interview, explaining that papers such as this shine an important light on ancient vegetation, the environment in which these animals lived, and how that changed over time.nnn“It’s very exciting, but maybe not so exciting for the people who want to be an Indiana Jones,” he added, referring to those who imagine paleontological work to consist of constant adventure in the field.nnnTo be clear, Notiomastodon is not some rare beast paleontologists have recently discovered.Scientists have been studying it for over two centuries.Its relative anonymity in other countries, let alone within South America itself, is a source of frustration.

Mothé has been studying South American proboscideans since 2007; she and others have published a number of papers on the subject.And yet this particular type of megafauna hasn’t entered popular discourse the way woolly mammoths have.nnnMol was frank about public misconceptions.In many cultures, the word ‘mammoth’—generally used in reference to the woolly mammoth—connotes something enormous.But in truth, woolly mammoths were among the smaller proboscideans.

“I could have one in my living room!” he quipped.nnWith an estimated height of 8 feet, Notiomastodon was about the same size if not a foot or two smaller than woollies.These heights compare to today’s elephants, but the true giant of all proboscideans would have been Asia’s Palaeoloxodon namadicus, which may have been up to 16 or 17 feet tall.nnAs for this recent work, Mothé hopes the academic community takes note.nn“It’s possible to do good science in collaboration with South American scientists.Because sometimes,” she concluded, comparing researchers to the animals she studies, “people forget that we are here!”nnJeanne Timmons (@mostlymammoths) is a freelance writer based in New Hampshire who blogs about paleontology and archaeology at mostlymammoths.wordpress.com.nnn.

WordPress 5.9 With Gutenberg Is The Future of Publishing via @sejournal, @martinibuster 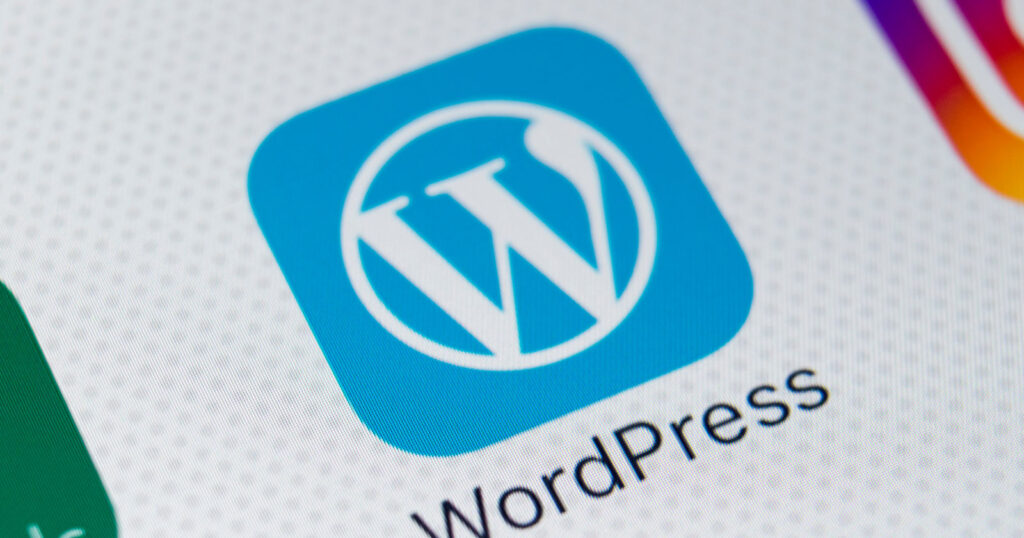