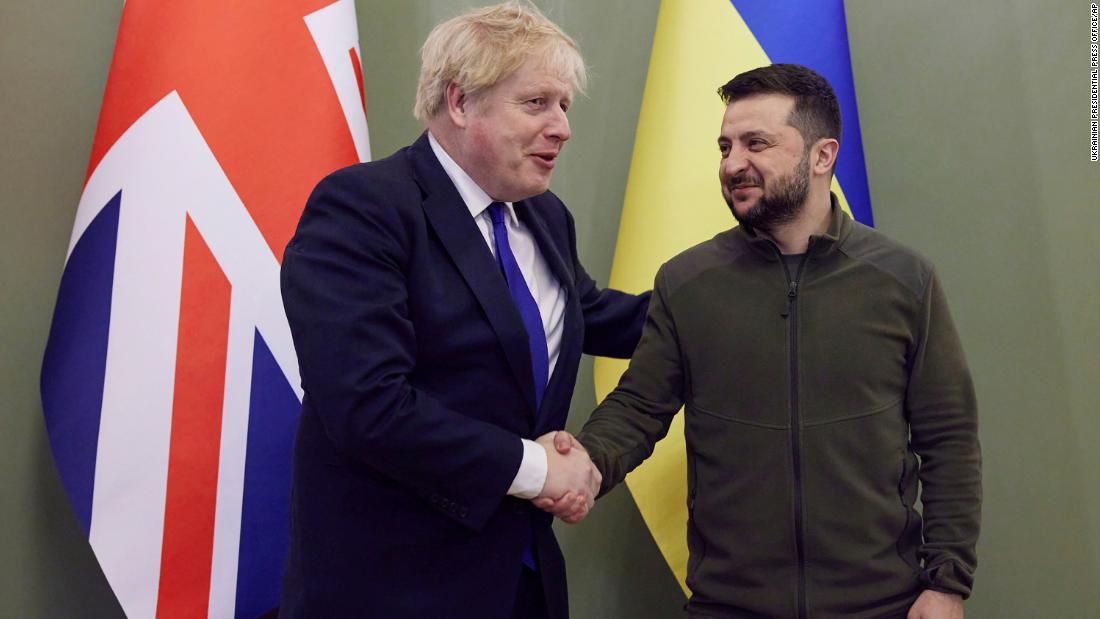 Johnson and Austria’s Chancellor Karl Nehammer made separate visits to Zelensky on Saturday, the latest in a string of leaders to travel to the country during the ongoing Russian invasion.A photograph tweeted by Ukraine’s Embassy to the UK showed Johnson seated opposite Zelensky at a table in a pink and green stuccoed room.The post was captioned with the word “Surprise” and a winking face emoji.The Press Service of the National Security and Defense Council of Ukraine said on its official Twitter account that the two leaders had held talks in Kyiv, posting several photographs of the pair’s previously unannounced meeting.

Johnson posted on Twitter that his visit to Kyiv was “a show of our unwavering support for the people of Ukraine” and announced a new package of financial and military aid.

Read More In this image provided by the Ukrainian Presidential Press Office, Ukrainian President Volodymyr Zelensky, left, welcomes Britain’s Prime Minister Boris Johnson in Kyiv.”Ukraine has defied the odds and pushed back Russian forces from the gates of Kyiv, achieving the greatest feat of arms of the 21st century,” the UK PM said in a statement.He praised Zelensky’s “resolute leadership” and the “invincible heroism and courage of the Ukrainian people,” adding that the UK “stands unwaveringly with them in this ongoing fight …

we are in it for the long run.” Later in his nightly address posted on social media, Zelensky thanked the UK and Johnson.”Boris was among those who didn’t doubt for a minute whether to support Ukraine.The leadership of Great Britain in providing our country help in defense, and also leadership in the sanctions policy, will always be in history.”Ukraine will always be grateful for this to Boris and Britain,” Zelensky said.

During the press conference, Johnson said the UK will continue to intensify sanctions against Russia.Johnson also said Russian President Vladimir Putin’s actions have dealt a “crushing blow” to his reputation and the Russian government.”We will influence Russia’s ability to use its energy resources,” he added.”The war determines the vision of Ukraine’s future, so our partners and I will supply Ukraine with equipment, technology, intelligence so that Ukraine never faces the horrors of invasion and blackmail.” Following the meeting, Downing Street said the UK government would provide armored vehicles and anti-ship missile systems, “in addition to the £100 million worth of high-grade military equipment” announced on Friday.

Zelensky and Nehammer’s meeting was separate to the one with Johnson and happened earlier on Saturday, according to Zelensky’s official Telegram channel.While several other leaders have visited Ukraine in recent weeks, the trip by Nehammer is significant given his country’s neutral status, which is enshrined in its constitution .

Russia or die: After weeks under Putin’s bombs, these Ukrainians were given only one way out Austria is not part of NATO and does not supply weapons to Ukraine.It has, however, provided Ukraine with humanitarian aid and helmets and protection vests for civilian use, according to a statement from the Austrian Chancellery.

Nehammer said Saturday that while his country is militarily neutral, “We understand we have to help where injustice and war crimes take place.” According to his office, Nehammer was set to meet with Prime Minister Denys Shmyhal and Kyiv Mayor Vitali Klitschko, before returning to Austria on Saturday evening.Nehammer was also due to visit the Kyiv suburb of Bucha , which endured five weeks of near-constant firefights; after Russian forces withdrew from the town, the bodies of at least 20 civilians were found lying in one street, some with their hands tied.War in Ukraine is scrambling the world’s ability to fight climate change Nehammer said Bucha was “a place of war crimes.” “We have to make those war crimes known to the UN, and international justice must begin investigating and fight these crimes,” he said during a news conference with Zelensky.The twin visits by Johnson and Nehammer came a day after top European Union officials made a trip to Ukraine.

During the visit, von der Leyen ceremoniously handed Zelensky an EU questionnaire to complete — a symbolic, but important step towards Ukraine’s membership of the bloc.Tweeting about the move, von der Leyen said: “We will accelerate this process as much as we can, while ensuring that all conditions are respected.” The prime ministers of the Czech Republic, Poland and Slovenia visited Kyiv last month, at a time when it was still regularly targeted by Russian strikes.Like Johnson’s visit on Saturday, that trip was kept secret until the three leaders were in the country, traveling on a train from eastern Ukraine..

Sun Apr 10 , 2022
Editor’s Note — Sign up for Unlocking the World, CNN Travel’s weekly newsletter .Get news about destinations opening and closing, inspiration for future adventures, plus the latest in aviation, food and drink, where to stay and other travel developments.(CNN) — Staff shortages and storms are causing major disruptions to spring […]