For Dolly Parton’s generations of fans, the country music icon’s Dollywood amusement park in Tennessee is an experience that keeps visitors entertained and giddy, from roller coasters and waterslides to stylish lodging and over-the-top dinner shows.Get the full experience.Choose your plan ArrowRight

Dollywood Parks and Resorts can now offer something else for its employees: Their fees will be covered by Parton’s company if they want to earn a degree.Herschend Enterprises, Dollywood’s parent company, announced Tuesday that Dollywood will pay 100 percent of the tuition costs, fees and books for employees who pursue higher education.Starting on Feb.24, all 11,000 seasonal, part-time and full-time employees at Herschend’s 25 U.S.attractions, including Dollywood, can register for the GROW U pilot program.The initiative allows employees to enroll as early as the first day of employment in diploma, degree and certificate programs offered by 30 learning partners.

Subjects offered in the higher education program include business administration and leadership, finance, marketing, technology and culinary studies.The company has also pledged to provide partial funding, or up to $5,250 a year, for 150 additional programs in fields such as engineering, human resources, hospitality and art design.“When our hosts feel appreciated and are given opportunities like this, they feel cared for and they can pass that feeling on to their guests,” Wes Ramey, a spokesman for Dollywood Co., told The Washington Post.Eugene Naughton, president of Dollywood Co., told WATE that one of the Dollywood Foundation’s key tenets is to “learn more.” Ramey said the program from Herschend that affects roughly 3,000 Dollywood employees had Parton’s full backing.“She’s very supportive of the employees learning and continuing to grow themselves,” Ramey said.In addition to the Dollywood park in Pigeon Forge, Tenn., the GROW U program also applies to attractions such as Pink Adventure Tours in Tennessee, Arizona and Nevada; Silver Dollar City in Missouri; and Adventure Aquarium in New Jersey.A spokesman for Parton directed questions about the program to Dollywood representatives.Parton’s fans widely celebrated the move as some companies struggle to attract and retain workers in what’s become a tight labor market.Although tuition reimbursement has been pared back in recent years as companies have tried to cut costs, large employers are beginning to again offer education-related incentives in hopes of attracting motivated workers and getting them to stay longer.With college costs averaging nearly $25,000 in 2019, according to the National Center of Education Statistics, tuition reimbursement has become an attractive employee perk.Major employers such as Best Buy, Chipotle and Home Depot cover up to $5,000 a year in tuition costs, while Starbucks offers to pay for its workers’ online college degrees through Arizona State University.Walmart announced in July that it would pay for college tuition and books for its 1.5 million U.S.employees.

The company said it will invest nearly $1 billion over the next five years in career training and development programs for workers who want to pursue work in fields such as business administration, supply chain and cybersecurity.Walmart now offering free college tuition and books to its 1.5 million U.S.employees Parton took over the Tennessee amusement park in 1986 and rebranded it as Dollywood, a 150-acre experience known for its down-home charm.Parton and Herschend Enterprises jointly own the park, which Tripadvisor describes as “one of the world’s best theme parks.”The singer, who is among the 2022 nominees announced for induction into the Rock and Roll Hall of Fame, is no stranger to philanthropy.The Dollywood Foundation gives more than $1 million in donations a year to local groups in Tennessee, according to Vanity Fair .Parton’s Imagination Library teams with communities each month to give children high-quality books at no cost.In 2020, Parton’s friendship with a Nashville doctor led to the singer donating $1 million to Vanderbilt University for covid-19 research, which partially funded Moderna’s coronavirus vaccine.

Dolly Parton helped fund Moderna’s vaccine.It began with a car crash and an unlikely friendship.She revealed last year that the royalties she made for writing “I Will Always Love You,” which became a global phenomenon when it was covered by Whitney Houston for the 1992 film “The Bodyguard,” were invested in a building in a historically Black Nashville neighborhood.“It was a whole strip mall, and I thought this is the perfect place for me to be, considering it was Whitney, so I just thought, ‘This is great, I’m just going to be down here with her people, who are my people as well,’ ” Parton said on Bravo’s “ Watch What Happens Live With Andy Cohen .” Dolly Parton invested Whitney Houston’s ‘I Will Always Love You’ cover royalties in Black community Ramey said Parton preaches four tenets that she popularized at a memorable and exuberant 2009 commencement speech at the University of Tennessee: “Dream more, learn more, care more and be more.” The program launched with Herschend Enterprises speaks to the tenet of “learn more,” Ramey noted.“It’s an opportunity to give back to adults at the park,” he said.“Whenever Dolly is involved in something, she makes sure it’s the best possible thing for everyone involved.”The GROW U initiative is backed by Guild Education , a company that offers similar programs to workers at big companies including Disney, Lowe’s and Taco Bell.As the news of the higher education program spread on social media, fans were quick to praise Parton as being “ among the best of us .”“Dolly Parton continues to lead the way,” former NBA player and CNN Plus personality Rex Chapman tweeted.Dolly Parton easily one of the best celeb-type people ever https://t.co/XW6goIpOcC Dolly Parton has done more to help people than most of the individuals in government https://t.co/xUG2FdC8Zf Dollywood Parks and Resorts is hiring people ages 14 and older for the this year’s operating season, Ramey said.If the past 24 hours is any indication, he said, there will be even greater interest among those wanting to work and pursue higher education at Dollywood and the other Herschend attractions.“If Dolly is involved, it’s always great to see the reaction, especially something like this,” he said.Abha Bhattarai contributed to this report.

Thu Feb 10 , 2022
New York Gov.Kathy Hochul lifted a statewide mask mandate Wednesday amid a battle over the rule’s legality and as a surge in Covid-19 infections continues to recede.With infection numbers now trending down, Hochul said the “tremendous progress” has allowed the state to move into a “new phase.” Hospitalizations also decreased […] 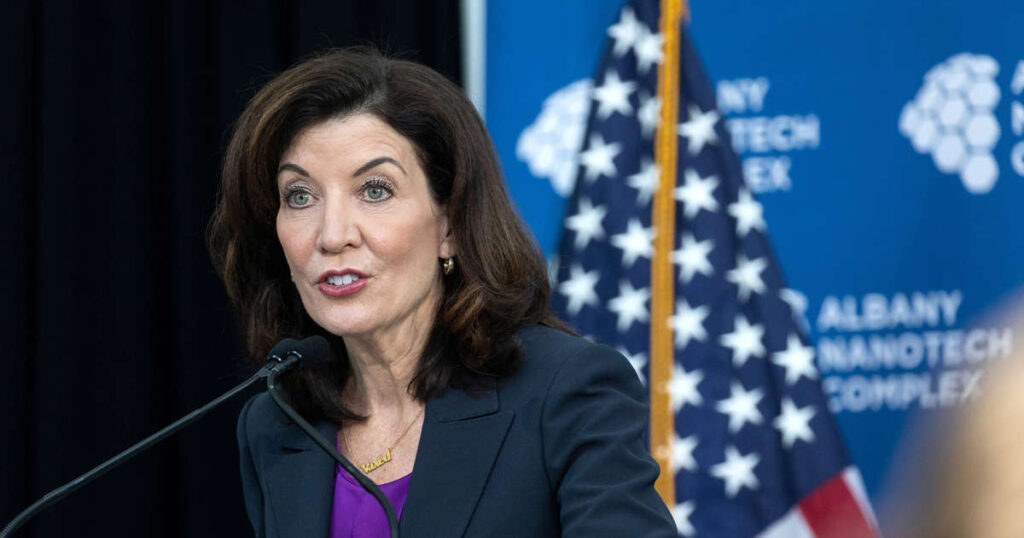