New York Gov.Kathy Hochul lifted a statewide mask mandate Wednesday amid a battle over the rule’s legality and as a surge in Covid-19 infections continues to recede.With infection numbers now trending down, Hochul said the “tremendous progress” has allowed the state to move into a “new phase.” Hospitalizations also decreased 63 percent between Jan.12 and Wednesday, which Hochul said increased confidence in the decision making process.”Why is all this happening? Because New Yorkers and businesses stepped up and did the right thing,” Hochul said.”And I will always be grateful for them for being the reason these numbers have been declining.” The New York Times first reported the development Tuesday night.Hochul’s reversal will go into effect on Thursday, the day the order was set to expire after she announced a temporary extension on Jan.

28.The governor recognized that local regions and private businesses may impose their own rules, regardless of a mandate.”We want to make sure that every business knows this is your prerogative and individuals who want to continue wearing masks can continue wearing masks,” Hochul said.”And I suspect when I walk the streets of New York City …I’m still going to see a lot of people wearing masks because they will feel safer.” But state regulated facilities that house a large group of vulnerable populations, such as nursing homes and childcare centers, will keep mask mandates.

As for schools, Hochul said an assessment would be made regarding mask mandates in March as many children return from break.”This fight is not over.We’re not surrendering, this is not disarmament,” Hochul said.”We’re going to continue to be adaptable and responsive to the changing circumstances.’ Wednesday’s announcement comes weeks after the mandate, imposed on Dec.13 , faced a legal challenge from parents who argued that masks had stunted their children’s growth and posed “an existential danger to our liberty.” The mandate was struck down Jan.24 by a state supreme court judge who said state officials didn’t have the authority to issue the mandate without legislative approval.

An appeals judge restored the mandate the next day, allowing it to stay in place while Hochul’s administration sought to have the ruling thrown out.The legal fight was playing out as state health department data showed that Covid-19 infections were falling across the state.The omicron surge peaked in New York last month, when a weekly average of people testing positive for the disease topped 22 percent.As of Monday, that number was just over 4 percent, according to the data.Just over 74 percent of the state is fully vaccinated, according to NBC News data.The move mirrored mask requirement rollbacks in other states.

In California, Gov.Gavin Newsom said Monday that he would let a statewide indoor mask mandate expire later this month for the vaccinated, while officials in New Jersey, Connecticut, Oregon and Delaware said they planned to drop mask requirements for schools.And also on Wednesday, Massachusetts Gov.Charlie Baker announced the state would lift its school mask mandates at the end of the month.Baker reasoned that increased access to vaccination, testing and the low risk for young people helps to mitigate the harm in school settings.”Our kids have had to put up with a lot of disruption, a lot of time alone, and have suffered a real learning loss over the past two years,” Baker said.”There’s no debating those points, no matter where you stand.”.

Thu Feb 10 , 2022
New York lifts indoor mask mandate, with California and N.J.mandates also set to end New York is lifting part of its indoor mask mandate, joining a growing list of states that are making similar adjustments. Gov.Kathy Hochul announced at a briefing Wednesday that the statewide vaccine-or-mask requirement for businesses will […] 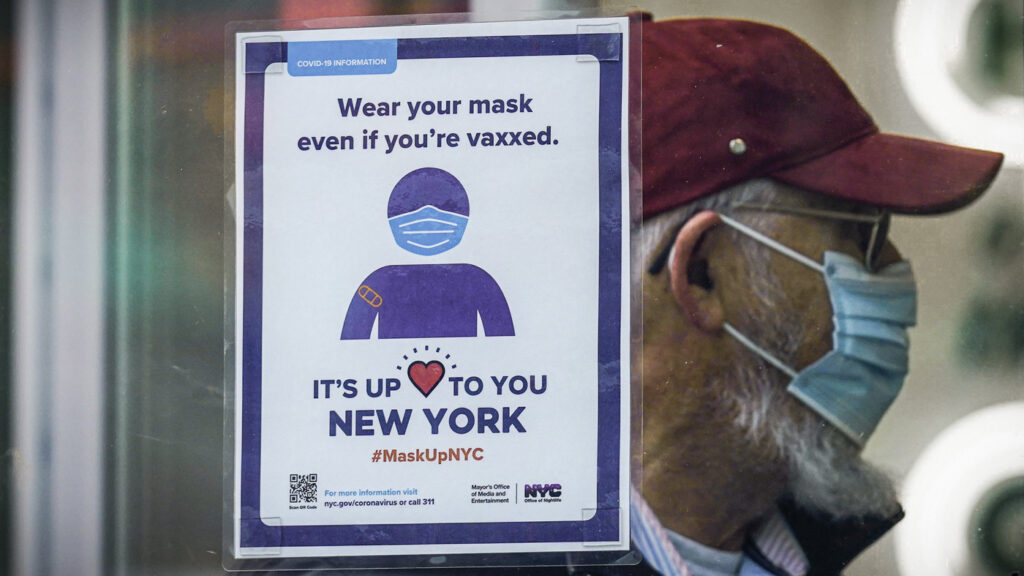