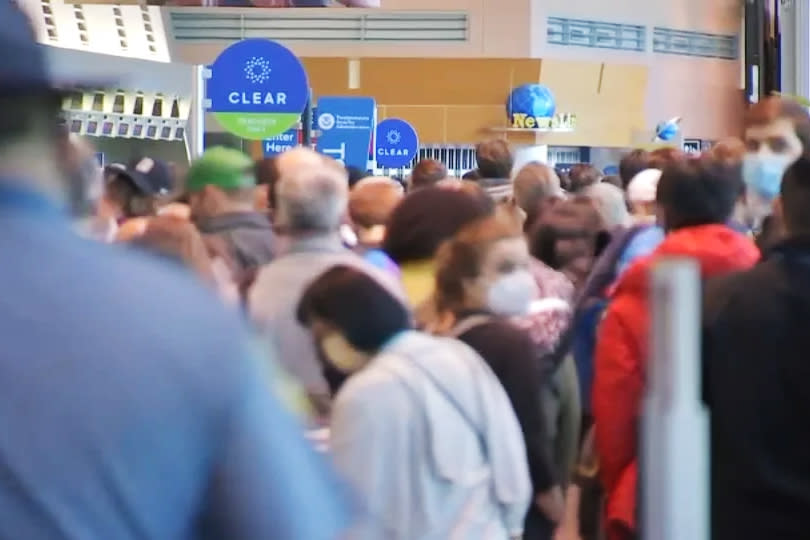 Passengers at Boston Logan International Airport faced confusion, panic and delays on Easter Sunday after concerns over a suspicious package sparked an evacuation and a visit from the state police bomb squad.

In a statement Sunday, Massachusetts State Police said their bomb squad had been called to Terminal A just after 4 p.m.after security staff spotted a suspicious item in a bag during a screening of checked luggage.

In video shared on social media , dozens of people can be seen appearing to exit the terminal as an airport employee’s voice tells everyone to leave through a secure checkpoint to be rescreened by Transportation Security Administration agents.

“You have to exit, this is mandatory,” the person can be heard saying, telling airport staff to also evacuate the area.

One passenger described the chaos, telling NBC Boston that there was panic, with people running and leaving their belongings behind.He said he also saw one man fall down during the confusion.

“Right out of nowhere, I see the whole crowd, people yelling and screaming like it was out of a movie,” Nico Pisello said.“No one knows what’s going on.”

Video: Gun scare at Cancun airport turns out to be falling billboards

In the end, police said the suspicious item turned out to be a PlayStation video game console.

They said the console was in a degraded condition caused by either age or damage.They said its condition had caused abnormalities in imaging when it was X-rayed, sparking concerns.

Shortly after the all-clear, Delta Air Lines told NBC Boston that it was holding flights wherever possible to ensure that passengers who were forced to evacuate the terminal could depart.It said that passengers would be rebooked if they were unable to make their flights, due to “crew time limits” or other issues.

It was not immediately clear how many passengers were affected by the incident.

Tue Apr 19 , 2022
A terminal at Boston Logan International Airport was evacuated after a “suspicious” device was found.The device turned out to be a defective PlayStation, which showed abnormalities when X-rayed.People panicked, ran, and left their belongings behind, one witness told NBC News, Get the latest tech news & scoops — delivered daily […]