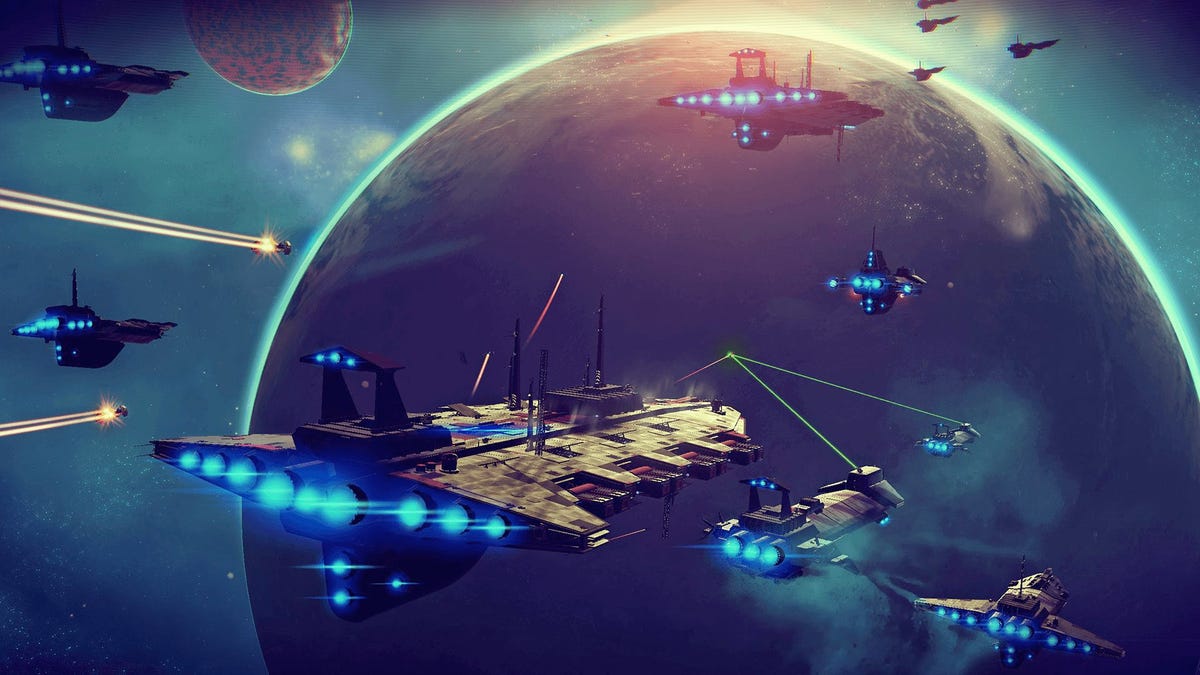 18 quintillion planets, and you still can’t get away from the worst people on Earth.To wit: The central nexus of No Man’s Sky , a region of charted space known as the Galactic Hub, was recently menaced by a troll who players say is a “neonazi.” Developer Hello Games has banned the griefer, permanently, but players still have concerns about the game’s reporting tools.

Advertisement No Man’s Sky , first released for PC and PlayStation in 2016, has evolved a lot since its rocky debut.At launch—and this is a story that’s been hashed out in more written accounts than there are planets in No Man’s Sky —the game lacked many promised features, like functional multiplayer.The hype suggested a game that was technically so vast you’d likely never run into another player.But when players actually visited the same exact planet as each other, they couldn’t interact.They couldn’t even see each other .

Many of the launch-window woes have since been fixed, and Hello Games has further released more than a dozen free expansions over the years, introducing features like mechs and custom bases .

No Man’s Sky has more or less recouped the lost goodwill from its early years, spawning a robust and hyper-active multiplayer community.

That community gathers in a number of settled regions referred to as “civilized space,” one of which is the Galactic Hub , a series of 11 interconnected regions where players congregate to, putting this bluntly, build cool shit.One planet is home to an endless rave .(I’ll take a one-way ticket, please.) Another is a sprawling series of roads and outposts , the foundation for an eventual utopian city.

Hello Games / AgentMindStorm ( YouTube ) For the most part, the Galactic Hub is devoid of trolls, astonishingly so, considering the rampant toxicity that pervades online games these days.But recently, as one of the Hub’s moderators noted in a lengthy statement posted to Reddit , one player took it upon themselves to wreak havoc.

Buy for $50 at Amazon “A neonazi troll is griefing bases in the Galactic Hub, and there’s nothing we can do,” the player known as 7101334, who founded the Galactic Hub, wrote .“Every single leader of a canonized civilization agrees that Hello Games has failed civilized space with their inaction.The ‘Report Base’ function returns a 500 Error meaning Hello Games has never seen a single one of those reports, and the in-game ‘Block’ function just doesn’t work at all.”

All across the Galactic Hub, players dedicate a lot of time to constructing bases, outposts, and other exoplanetary structures.

The troll in question, however, would show up and plaster blocks all over these bases , essentially ruining any meticulously laid plans.In any role-playing situation, be it a video game or a round of D&D , there’s a certain level of leeway for assholes—life is full of assholes, after all—but there’s a line.

Advertisement Representatives for the Galactic Hub provided Kotaku with the troll’s user name on background, so as to not run afoul of any potential terms in No Man’s Sky ’s EULA.Kotaku was able to further verify the user name in screenshots and a video clip, and it indeed includes numbers commonly affiliated with white supremacy, plus a reference to a well-known neo-Nazi leader.When reached for comment, Hello Games declined to provide or officially confirm the specific player’s username, but told Kotaku :

It’s common sadly for the most problematic players to find ways to have the most offensive names…The most effective thing when we see these names are reported to us is for us to report them to the platform holder, and have them banned from all games, rather than us banning them just from No Man’s Sky .

This is our normal course of action.Having said that, the specific player you mentioned has already been permanently banned from No Man’s Sky also.

Advertisement The mere act of reporting the troll, however, sparked concern among No Man’s Sky community members.Players say that trying to report the offending player resulted in a “Server 500” error, which led many to assume that reports weren’t actually going through to Hello Games.The studio, for its part, disputes this, and says it did receive the complaints.

A representative for Hello Games told Kotaku the reason those errors were popping up is because the offending player’s bases had already been reported.

( No Man’s Sky lacks some of the direct player-reporting tools available in other online games, which has long been an issue among the game’s community, but players can directly report offensive bases, rather than the players who built them.Here’s a video walkthrough of how it works.)

Advertisement When players report a base, it’s immediately blocked from local view—meaning they can’t see it on their PC or console—but is still “downloadable by other players.” Otherwise, the rep said, it could easily be abused.Hello Games reviews all reports and moderates accordingly.In this instance, the rep said, the reported bases did get moderated, despite the offending player making use of certain tactics designed to circumvent the game’s existing anti-troll methods, a fix for which is en route.

“We have identified these and a patch will be rolled out as soon as possible,” the representative said, referring to the moderation-dodging exploits.

“We have a policy of not publicly acknowledging trolls or their methods, to prevent encouraging copycats.”

Image: Hello Games In this instance, the matter is closed.The player is banned.But No Man’s Sky players still have concerns about the reporting tools that are—or rather, aren’t—available to the community.

Advertisement “The easiest, least controversial solution would be for them to fix their in-game block button.Currently it does nothing at all, as far as we can tell,” 7101334 told Kotaku via email.“Maybe blocks someone from joining you, but they can still just warp to the system and get in your session without directly joining.”

Other players, meanwhile, say that handing over such strict reporting tools to community members, or even trusted moderators, potentially opens the door for exploitation.Giving any player unilateral power like that is ripe for abuse.

But it’s clear something’s gotta give.While trolls and griefers are rare in No Man’s Sky , they’re still a problem.7101334 pointed out one notable member of the Galactic Hub who said they no longer build structures on planets because they know those structures stand a high chance of getting sullied by bad actors.Obviously, that’s not ideal.

Advertisement “That’s the state of the game, and it’s going to take more than one ban to correct it,” 7101334 said.“If you roleplay as someone who deserves to get banned, [Hello Games] needs to roleplay as a company that actually protects their community.”

When asked about potential plans to expand the reporting toolkit for players, the representative for Hello Games didn’t have anything to add.

The studio, they said, is “confident in the levels of protection we already provide.”

Sun Apr 3 , 2022
The HP Omen 45L is the best gaming desktop you can buy.It’s fitted with the latest CPUs and GPUs from Nvidia, AMD, or Intel, and it includes a unique case design that enables much better cooling than traditional chassis. Although the Omen 45L is our favorite gaming PC right now, […] 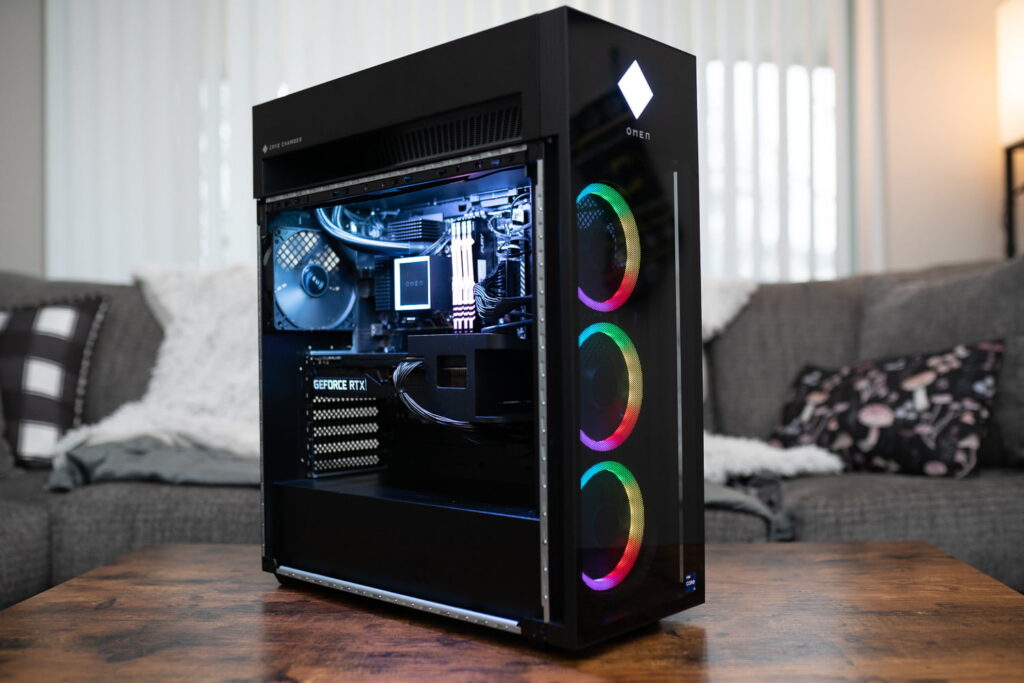