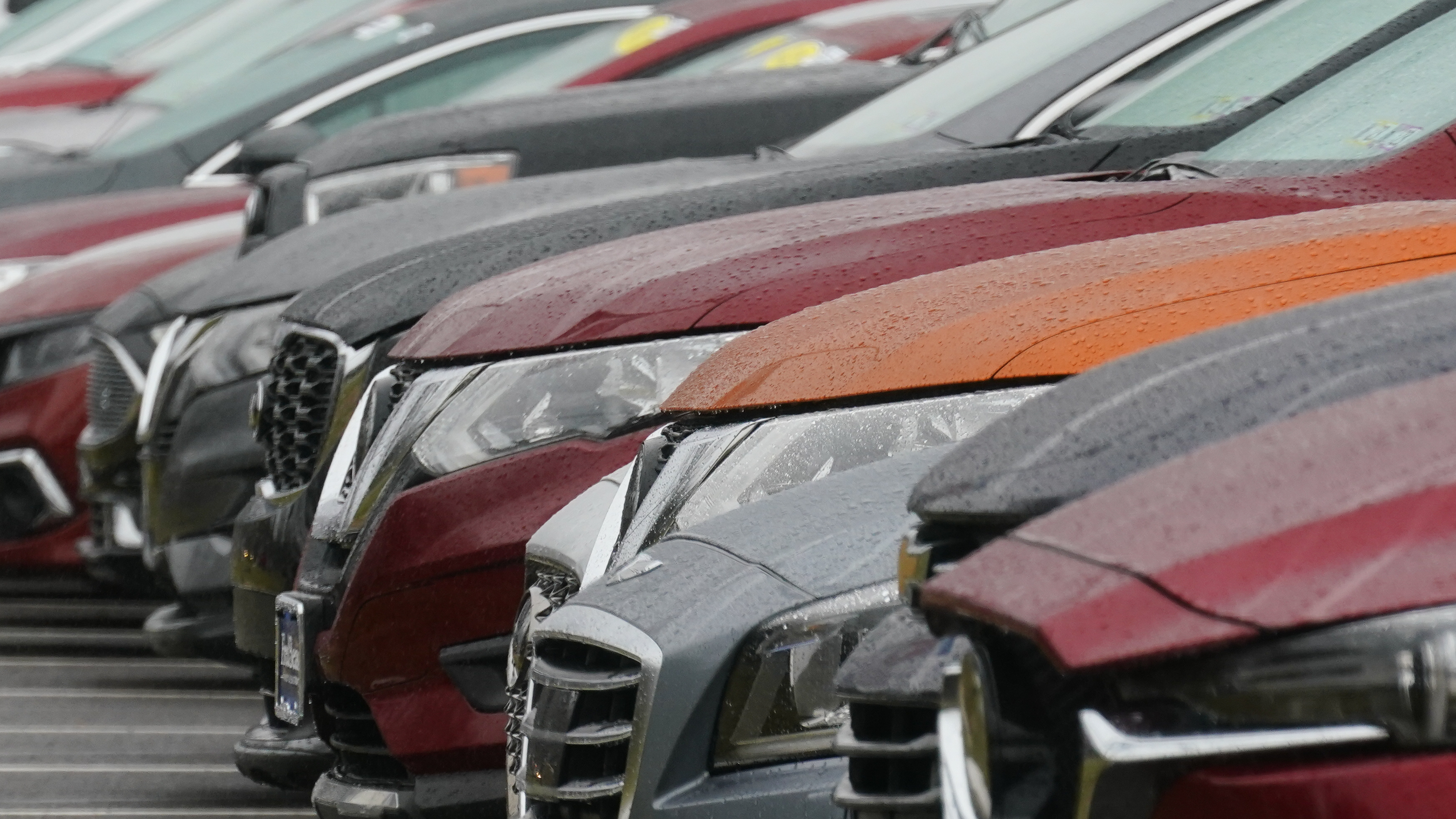 Enlarge this image Used cars for sale sit on a lot at a dealership in Doylestown, Pa., last week.Finding a car is still tough, especially for more affordable options.Matt Rourke/AP Matt Rourke/AP

Used cars for sale sit on a lot at a dealership in Doylestown, Pa., last week.Finding a car is still tough, especially for more affordable options.

Matt Rourke/AP Thinking of buying a car? Kimberly Walker, a mother of two in Columbia, S.C., can tell you exactly what that’s like these days.

She recently found herself having to shop for two vehicles on opposite ends of the market.For herself, she wanted a late-model electric Audi, and after looking around, she was able to find a used 2021 e-tron at a local dealership.

“We went back and forth.

We were there for four hours,” she says.

“They did not budge on that price.”

For her teenage daughter, Walker was looking to spend just a few thousand bucks on an old car.The experience wasn’t any better.

For four months they tried private sellers and kept losing bidding war after bidding war.CarMax didn’t have a single option under $15,000.

They eventually found a car.

There was just one catch.

“We ended up purchasing a 2009 Toyota Camry that actually was not running at the time,” Walker says.”But the mechanic agreed to put a new engine in it and gave it to us for $3,500.”

Business So, You Are Shopping For A Car At A Terrible Time.

Here’s What To Keep In Mind

The Coronavirus Crisis A Pandemic Sticker Shock: Used-Car Prices Are Through The Roof Buying a car has been a frustrating experience over the past year as automakers continue to struggle to find computer chips and other essential materials because of snarled supply chains.

Unfortunately, it hasn’t gotten any better.

The University of Michigan has been polling consumers for more than 50 years and asking whether they feel like it’s a good or bad time to buy a car.Today, more people say it’s a bad time than ever before in the survey’s history.

And for people on a tight budget, it’s becoming a real crisis.

According to Kelley Blue Book , the average used car now sells for 42% more than before the pandemic.

“This is troubling,” he adds.

The Manheim Index is based on millions of used vehicle transactions per year and measures value “independent of underlying shifts in the characteristics of vehicles being sold.” It expresses value relative to January 1995 (when the index was set at 100).Manheim Consulting/Cox Automotive/Camila Domonoske Manheim Consulting/Cox Automotive/Camila Domonoske It’s still the supply chains The auto market is still reeling after the pandemic completely upended the balance of supply and demand.

Carmakers have had to cut their output as they struggle to find critical materials such as chips, creating a shortage of vehicles that has caused ripple effects through new and used markets.

And it’s not just how many vehicles they’re producing, but what kinds.

Automakers have responded to the shortages by focusing on their most profitable cars, meaning the priciest ones.

This trend predates the pandemic, but the chip shortage accelerated it dramatically.

“Companies have made a defined decision that says, ‘If I only have so many chips, I’m going to put those chips in my most expensive models,'” Volkswagen of America CEO Scott Keogh told NPR in January.

It has pushed average new vehicle prices up significantly, and because people priced out of new cars turned to used cars, every car shopper has felt the impact.

But it’s a good time to be an automaker That focus on more expensive cars has been good for automakers’ bottom lines.

Both Tesla and General Motors had record earnings last year, and executives largely credited a focus on higher-margin vehicles like the Model Y for Tesla and full-size pickup trucks for GM.

Ford had its best year since 2016, citing “strong mix,” which is business jargon for a higher ratio of more-profitable vehicles.

It’s been good for unionized auto workers, too: They will be getting hefty profit-sharing checks — up to $10,250 for GM workers.

Dealerships have also benefited.Scarcity has vehicles flying off the lot, and they, too, profit off the shift to up-market.

“It’s very easy to operate as a car dealer in this environment,” says Arnaldo Bomnin, the CEO of Bomnin Automotive Group, a dealership group based in Miami.His company just raked in $1 billion in annual revenue for the first time ever.

Enlarge this image A car dealership stands empty in Laurel, Md., on May 27, 2021, as many car dealerships across the country are running low on new vehicles because of a computer chip shortage.It’s months later, and automakers are still struggling to meet demand.

A car dealership stands empty in Laurel, Md., on May 27, 2021, as many car dealerships across the country are running low on new vehicles because of a computer chip shortage.It’s months later, and automakers are still struggling to meet demand.

Jim Watson/AFP via Getty Images How long can the auto market stay like this? The upended car market has been so good for automakers’ margins that it’s raising questions about whether some shifts will become permanent, even when chip supply chains go back to normal.(As for when that will happen, optimists think the crunch will ease in a matter of months, while pessimists are projecting shortages well into next year.)

Auto executives have told investors that these very profitable months have made them realize they may have been making too many cars before.At some points in 2019, there were 4 million cars waiting to be sold; the current stockpile is around a million vehicles.

But many analysts believe that once chips become available, companies will likely fall back into fighting over market share by offering higher volumes, lower prices and more options.

“You put something out there that’s nice and attractive and you put a 20-grand price point — the whole world is going to be crying for it,” said Jones at TrueCar.

Besides, trying to squeeze margins with fewer, fancier vehicles may be boosting auto companies now, but it could easily come back to bite them.

“It’s a tremendous inconvenience for the customer,” says Bomnin, the Miami dealer owner.”If I have to choose, I prefer to have 1,700 cars in the lot.”

Kimberly Walker, in South Carolina, is an example of what the industry stands to lose.She says if market conditions stay like this, she’ll be changing her behavior.

“I will not be buying a new car every few years,” she says.”I will probably drive this e-tron until the wheels fall off and then hand it to my 6-year-old when he starts driving.”.

Wed Feb 9 , 2022
Saskatchewan will end its vaccine passport policy on Monday, Feb.14. That means businesses, workplaces and other public venues will no longer be mandated by the province to require proof of vaccination or a negative test. Currently, all Saskatchewan residents must show proof that they have received two shots of the […]