As a writer who prizes both freedom of association as a foundational liberty and social cohesion as a general good, I was intrigued this week to watch musician Neil Young’s fight with Spotify pit these two ideas against each other.Young demanded that his music be removed from the streaming service as a way to protest the vaccine misinformation mega-popular podcast host Joe Rogan spreads on the platform.Young, himself a survivor of childhood polio, instructed Spotify that “they can have Rogan or Young.Not both.”Ultimately, Young got his wish; as of Wednesday, his music had disappeared .From a certain point of view, this is an example of the system working well, protecting the rights of artists and the prerogatives of businesses alike.But we might stop for a moment and ask whether this is the system we want.First, those who celebrate freedom of association should welcome the move: Freedom of association means freedom of disassociation as well.If your neighbors annoy you, you should always be free to move somewhere the neighbors are less annoying.Similarly, Spotify should be allowed to decide whom to do business with.If keeping Joe Rogan is more profitable than keeping Neil Young — and it almost certainly is, given Rogan’s massive audience and his exclusivity to the platform — then Spotify should be able to pick Rogan over Young.

And if that decision in turn sparks a wave of cancellations, with #SpotifyDeleted trending on Twitter, so be it.This is all well and good.Content creators and content consumers alike choose their preferred associations, and we all go about our day.But I do worry about the continued fragmentation of society that attends the idea that everyone sharing a cultural space must align ideologically to coexist.Most would think it unreasonable for Young to demand to be removed from a radio station’s playlist because that station also plays Trump fans Ted Nugent or Kid Rock — or even if it played Eric Clapton’s silly vaccine protest song.There’s also a queasiness to Young’s attempt to convince other musicians to strong-arm Spotify by removing their wares, too.

I’m wary of boycotts generally, as there are few limiting principles once you decide you cannot tolerate someone’s thinking.Given Young’s own controversial, science-averse advocacy on such issues as life-saving, child-blindness-averting GMOs, one could ask what’s stopping a retaliatory boycott.Or, to return to the real estate analogy, freedom of association means you’re free to move, but you shouldn’t be able to threaten an exodus to get the homeowners’ association to evict a neighbor.Regardless of Young’s distaste for Rogan, removing him from Spotify won’t silence him.It could, in fact, make him more prolific, as the Spotify paywall seems to have limited his reach somewhat .

If Young is trying to stifle anti-vaccine sentiment, the best thing he could do, ironically, is keep Rogan walled inside Spotify.Setting that aside, what concerns me most about all this is the siloing of society into warring tribes.It’s not enough to signal disagreement with someone when they do or say something boneheaded; the only response is full separation, an immediate partition.There’s something deeply corrosive about attempting to live in a way that demands everyone agree with you, even on a fundamental issue such as vaccination.Sometimes mass movements are the only way to solve mass problems, such as state-sanctioned bigotry.

Trying to silence a rambling fool feels like small potatoes in comparison.But this is, perhaps, an inevitable result of our flattened world and our existence within an eternally online state.Despite being more socially distant than ever, we’re all closer than before — no more than a tap or two on your phone separates Rogan and Young.(Perhaps this kerfuffle can be a reminder of the benefit to physical media.After all, your Neil Young LP won’t ever get wiped away — and it can rest next to your five-season “NewsRadio” boxset without any worry.)At least for the diverse cultural connoisseur, “Rogan or Young, not both” is a false choice.

There’s no real tension in enjoying a beverage from the Israel-based SodaStream while listening to a Pink Floyd album featuring anti-Israel activist Roger Waters, just as there’s no tension in switching from “Heart of Gold” to “The Joe Rogan Experience.” The interesting consumer — the consumer who accepts that art exists separately from the artist and the artist’s political stances — contains multitudes.The limitless expanse of the Internet is invariably going to bring these multitudes into conflict with one another, as it should.Reconciling these conflicts within ourselves will be the challenge of the modern media consumer..

Sat Jan 29 , 2022
The thousands of people paid to plant corn, pick apples and milk cows in New York often work long days, six days a week — and earn overtime only after 60 hours of labor. The state is now looking at lowering that overtime threshold.New York could possibly join California and […] 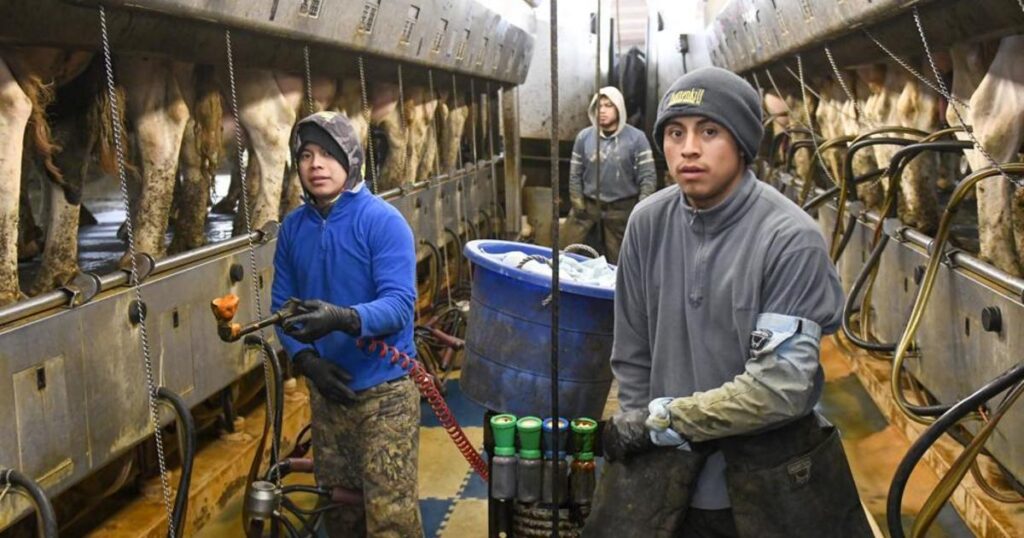