MEXICO CITY — Everyone knew the pandemic would bring death.Edith García Díaz thought it would also bring birth — lots of birth.As a state health official, she worried that the crisis would impede access to contraceptives, leading to a rise in pregnancies.Doctors were swamped with covid-19 patients.Couples were hunkering down at home, afraid to go out.

Early in the pandemic, Mexico’s population agency warned that the pandemic could result in 120,000 additional unplanned births — an unwelcome reversal in the long battle to tame the fertility rate.

But as the data trickle in, one state after another has reported the opposite tendency.Births in Mexico dropped 11 percent in the first six months of 2021 compared with the same period a year earlier, according to preliminary Health Ministry data.

García Díaz, who is in charge of maternal health for Zacatecas, looked at her state’s annual statistics in November and was startled.There were 5,000 fewer newborns.“I had never seen anything like this,” the doctor said.As demographers attempt to quantify the effects of the pandemic, they’re finding more short-term baby busts than booms — at least, so far.

The U.N.Population Fund initially predicted as many as 7 million additional unplanned pregnancies in developing countries, if lengthy lockdowns impeded access to birth control.Yet in a recent study of 15 such countries , the agency found that only two saw more births: Bhutan and Bangladesh.“Economic insecurity and fears of covid are indeed [causing] a profound undermining of people’s hopes and expectations and plans for the future,” said Rachel Snow, a senior U.N.population official.

“This may be much more universal than we anticipated.” How two young math geeks solved the mystery of Mexico City’s covid-19 dead Officials caution that it’s too early to say whether there has been a global decline in births.Data is scarce in the world’s poorest countries, where births may have risen.And even middle-income countries with decent health data systems, such as Mexico, face delays in gathering birth statistics, so the numbers could change somewhat.It’s also unclear whether the health crisis will have a long-term impact on fertility.In many wealthy countries, including the United States, births plunged in late 2020 and early 2021, when the earliest “pandemic pregnancies” came to term.

But they quickly bounced back to pre-covid levels .Health professionals are still studying why births in many areas dipped more than expected.In Mexico, some health departments managed to maintain family planning programs despite the immense strain on the medical system.The number of weddings plummeted, leading some couples to postpone starting a family.Lockdowns might have kept adolescents from socializing.A shift to longer-acting contraceptives, already underway before the pandemic, might have been a factor.Health professionals and women’s advocates also point to growing attention to birth control in a country where half of pregnancies had previously been unplanned.“Women are aware,” said García Díaz, “and they’re determined to not have babies, for the moment.” Mexico’s pandemic policy: No fines.

No curfews.No police.No regrets.The decline in fertility is visible in preliminary birth-certificate statistics reported by Mexican cities for the first half of 2021: Births tumbled by 17 percent in Mexico City compared with the same period a year earlier, according to the data.

They slumped 18 percent in Monterrey, 21 percent in Mérida and 29 percent in Tlaxcala.The trend has also been apparent in shops, clinics and churches.“We’ve closed 10 out of 25 stores this year,” said Jesús Prado, a senior manager at Bebé Mart, a national chain that sells “everything a baby could need” — diapers, powder, strollers and clothes.

Revenue is still just 70 to 80 percent of what it was pre-pandemic.“And that’s on a good day,” he said.Aide Licona saw her business dry up, too.

She runs the Sunny Side early-education center in Tulancingo, a city in Hidalgo state about 75 miles north of the Mexican capital.Before the pandemic, she says, about 20 women participated in her prenatal “early stimulation” class; when the coronavirus arrived, that dropped to zero.Only two people signed up for breastfeeding coaching this year.Some of the falloff may have been due to people’s reduced incomes.

But couples also put off pregnancy over fears about the coronavirus.At least 440,000 Mexicans have died of covid-19, according to official estimates — one of the world’s highest tolls.“When you are hit with this reality, an illness that could quickly end your life, you become afraid,” Licona said.The 26-year-old and her husband postponed their own plans to start a family.One factor was the economic crash; Mexico’s gross domestic product shrank more than 8 percent last year.Licona was also uneasy about giving birth in a hospital full of covid-19 patients.“Many people worried about this — if they brought a child into the world, under what conditions would it be?” she said.The radical change in social life during coronavirus lockdowns may have also contributed to fewer pregnancies.

With churches closed and large gatherings banned, Mexico’s traditionally boisterous wedding feasts were put on hold.The number of marriages plunged 35 percent last year, according to the national statistics institute.Gabriela Cuéllar works in a shop in Tulancingo selling puffy fairy-tale wedding dresses and tiny embroidered baptismal robes.“I can’t tell you when things will go back to normal,” she said.

“I think many women think twice about having a baby — because of the economy, the crisis, the lack of normal classes in school.”Demographers say it’s common for births to decrease during times of economic turmoil — as happened during the Great Depression and the 2008 financial crisis — because of financial anxieties.In Mexico, the uncertainty was compounded by the lack of a national unemployment-insurance system and a limited government coronavirus stimulus package .For some in Tulancingo, the strain became too much.In July 2020, a baby was abandoned in the Roman Catholic cathedral, for the first time in more than a decade.Then last May, a woman asked a man praying in the church to watch her infant while she went to the bathroom.She never returned.What does the omicron variant mean for a highly vaccinated country? Denmark has a dire answer.Mexican health authorities note that births were already declining before the pandemic.

That’s due in part to a vigorous family planning campaign that’s reduced the average number of children per woman from nearly seven in the 1970s to just 2.1 in 2019 .Today, most birth control is provided free by government institutions.When the pandemic began, the government declared reproductive and sexual health care “essential” services.Officials scrambled to ensure that people had access to birth control — with everything from bowls of free condoms at medical centers to social media campaigns aimed at adolescents.In many instances, patients didn’t need to be persuaded to consider birth control.

In the state of Tlaxcala, the number of people who sought sterilization soared, health minister Rigoberto Zamudio Meneses said.“Before, it was difficult for men to decide to have a vasectomy,” he said.

“Now they are doing it more routinely.”Graciela Vázquez Sándoval, director of the Women’s Hospital of Zacatecas, said that in the past, few of her patients planned their pregnancies.In 2020, that changed.

Increasingly, women were asking for long-acting birth-control methods such as implants and hormonal intrauterine devices, or IUDs.“People told me, ‘I can’t have so many children with this economic situation,’ ” the doctor said.Ling Zhou, a government doctor in charge of reproductive health in the Monterrey suburb of Apodaca, said the increase in requests for birth control and vasectomies appeared to be “a long-term change.”Yet women’s groups across the country fielded a host of complaints from people unable to get contraceptives from overwhelmed clinics.Tania Gabriela García, a slender, baby-faced 23-year-old, says she panicked when her health center in the southern state of Tabasco ran out of the birth-control injections she’d been receiving.She and her husband had lost their jobs and were already struggling to care for their toddler.They didn’t have money to purchase the medication at a pharmacy.“If I bought the injections, I couldn’t afford diapers,” she said.When she learned she was expecting another baby, she wept.She considered terminating the pregnancy, but her husband talked her out of it.“I know many girls who have aborted recently,” she said.The fact that the procedure isn’t available legally in most Mexican states — except in limited cases, such as rape — didn’t stop them, García said.“They look at the Internet or find a midwife who helps.”Legal abortions declined in 2020, according to government records.

Yet clandestine abortion is widespread, making it difficult to determine whether the procedure increased during the pandemic.(The Supreme Court decriminalized abortion in September, but only six of 32 Mexican states have legalized it.)Reproductive rights groups have reported swelling demand for information about misoprostol, an ulcer medication used by women to induce “at home” abortions.

Before the pandemic, the nonprofit Di RAMONA, in Hidalgo state, received requests for such advice from about four women each week.By early 2021, that number had rocketed to as many as 75.“We’re in an unprecedented situation,” co-founder Daniela Téllez said.Téllez attributed the demand to a variety of factors: couples’ difficulties in obtaining birth control, the jump in unemployment, and a rise in domestic and sexual violence.“It was one pandemic inside the other,” she said.

Gina Jiménez Ríos and Gabriela Martínez contributed to this report.Read more: Mexican migrant deaths have surged in the U.S.

during the pandemic.Sending their bodies home is a challenge.A lawyer fought for justice after a Mexican massacre.Then the government made her a suspect.

The search for the disappeared points to Mexico’s darkest secrets..

Tue Jan 4 , 2022
A winter storm packing heavy snow was rolling into the District of Columbia, northern Virginia and central Maryland early Monday, bringing up to 10 inches of snow to the area through the afternoon.The system was expected to continue up the East Coast. The National Weather Service issued a winter storm […] 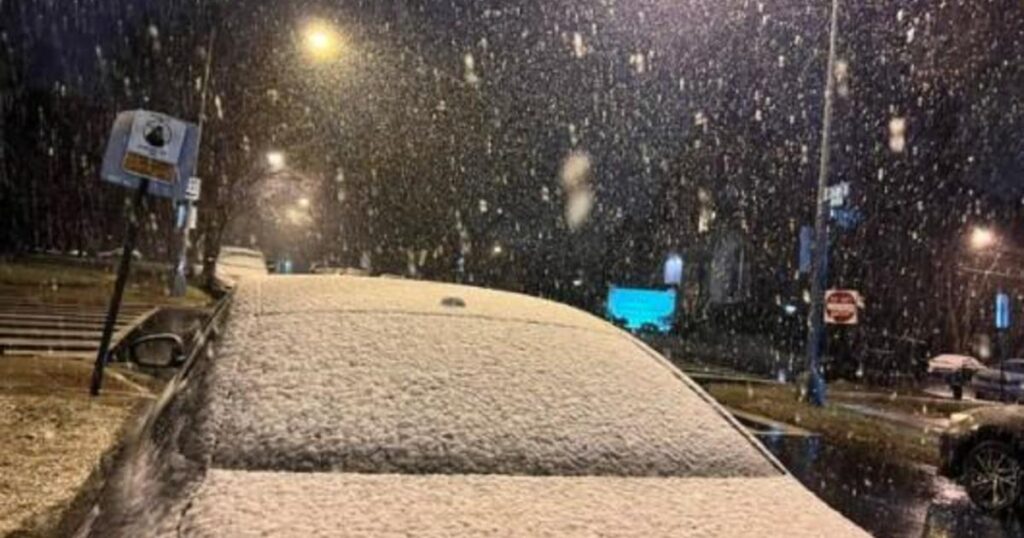