Mother Nature is putting Texas’s heavily scrutinized electrical grid to the test this week as a winter storm with snow and ice leaves thousands without power and a wave of Arctic air sends temperatures plunging well below normal across the southern Plains.But, while Arctic air will pack a punch, temperatures will trend upward as soon as this weekend, AccuWeather meteorologists say.On Tuesday, Feb.2, the Electric Reliability Council of Texas (ERCOT) issued a watch effective through Sunday, Feb.6, due to anticipated snow, ice and cold conditions.

The utility watch followed an operating condition notice for the potential for extreme weather conditions on Friday, Jan.28.”ERCOT projects to have sufficient generation to meet the high demand for electricity,” the press release stated and added that many reforms were done since February 2021 to increase the reliability of the Texas grid.The Lone Star State was overwhelmed by a historic power crisis over a two-week stretch in February 2021 that resulted from an exceptional demand for heat after a series of winter storms and historically low temperatures.Temperature departures over a several-day stretch dipped to about 40 degrees below normal and featured multiple nights with low temperatures in the single digits and even some readings below zero in the central counties of the state.

The high demand for power resulted in a chain reaction of power failures and caused scores of burst pipes and additional damage to homes and businesses due to the lack of heat.© Provided by AccuWeather In this radar image from midday Thursday, Feb.3, 2022, snow is depicted in blue, while ice is shown in shades of purple and pink.Rain and thunderstorms are in shades of green, yellow and red.(AccuWeather) A massive winter storm began to affect Texas and the southern Plains states in earnest on Wednesday as Arctic air oozed southward.On Thursday, freezing rain and sleet, along with a plunge of cold air were expanding from Dallas to Austin , San Antonio and even part of the Houston metro area.

A buildup of ice and clinging snow was responsible for more than 70,000 power outages as of Thursday midday, according to PowerOutage.US , and that number was expected to climb as the icy conditions stretch southward and eastward in the state into Thursday evening.Temperatures plunged nearly 30 degrees from 4 a.m.to 7 a.m.local time in the southern border city of Brownsville, Texas.Temperatures hovered near 72 F around 4 a.m.

but had dropped to 47 by 7 a.m., forecasters said.In South Texas, temperatures are forecast to dip low enough at the end of the week to be of concern for crop damage and to threaten a high risk of frozen pipes in unheated areas of homes and businesses.© Provided by AccuWeather In the south-central region, the winter storm was hitting Texas, Oklahoma, Arkansas, northwestern Mississippi, Missouri and portions of Tennessee and Kentucky hard on Thursday.

In parts of the southern Plains, Mississippi Valley and the Ohio Valley, up to an inch of ice can adhere to trees and power lines.The freeze-up of wet and slushy areas will also make for dangerous and slippery driving conditions.Surfaces that appear to be wet could be covered with a thin glaze of ice that can lead to vehicle accidents and pedestrian slip-and-fall incidents.”While the cold outbreak in the wake of the storm this week will pale in comparison to the intensity and length of that of February 2021, it will still be significant,” AccuWeather Chief On-Air Meteorologist Bernie Rayno said.© Provided by AccuWeather In Amarillo , Texas, located in the panhandle of the northwestern part of the state, temperatures were hovering in the middle single digits Thursday morning following an inch or two of snow from the storm.People in Texas will be reaching to turn up the heat during this outbreak, and that will test the grid, AccuWeather Chief Operating Officer Evan Myers said, adding that where the power goes out in parts of Texas and any other areas in the far-reaching ice storm or its aftermath, some households and communities could be in the dark and cold for many hours with dangerously low and potentially damaging temperatures.

© Provided by AccuWeather Into this weekend, temperatures at night are forecast to dip to within a few degrees of 20 in Little Rock , Arkansas, the teens in Dallas and close to 10 degrees in Oklahoma City .Average low temperatures for early February are 32, 38 and 28 respectively, so weekend lows will be 10-30 degrees below normal for the three aforementioned cities.Some daily record-low temperatures that have been in the books dating as far as the early 1900s will even be challenged each morning through the weekend.Cold snaps from 1912, 1923, 1982 and 1989 that still account for records today will be in jeopardy.© Provided by AccuWeather But as bad as the ice, snow and the cold that follows is expected to be in parts of the South Central states, there is some good news on the weather front this weekend, forecasters say.

Unlike the long-duration freezer effect from last February, this cold snap will be short-lived.

Temperatures are predicted to begin to trend upward this weekend and should assist crews and property owners with storm cleanup.Some locations may climb above the freezing mark as early as Friday afternoon with much of the region forecast to thaw during the daytime on Saturday and Sunday.For example, highs will trend upward through the 40s in Dallas and the 50s in San Antonio this weekend.© Provided by AccuWeather “Even though the moderating trend will help, it will still be chilly, relative to average for early February,” Rayno said.

Normal highs for Texas range from the mid-50s in the panhandle to near 60 in Dallas, the mid-60s in San Antonio and Houston and the mid-70s in Brownsville.Temperatures will peak 5-15 degrees shy of average this weekend.As ice begins to melt off trees and power lines this weekend, some sporadic additional power outages can occur due to shifting tree limbs.Falling chunks of ice from roofs, bridges and trees can cause injuries and damage to vehicles.In terms of any additional outbreaks of Arctic air this month, another batch of cold air is forecast to settle southward early next week, but it won’t be as bitterly cold as the air moving over the Plains on Thursday and Friday.

CLICK HERE FOR THE FREE ACCUWEATHER APP Another temperature moderating trend will follow for a time later next week, but a big blast of cold air may pour southward across the Plains and Mississippi Valley within a few days of Valentine’s Day, Feb.14, AccuWeather Lead Long-Range Meteorologist Paul Pastelok said.”There is a lot of snow on the ground over southern Canada, and that will help pave the way for cold air to plunge southward into the central United States for the next two to three weeks,” Pastelok stated.In the next week or two, the weather pattern for the region may not be quite as busy as far as winter storms are concerned.

For the latest weather news check back on AccuWeather.com .Watch the AccuWeather Network on DIRECTV , Frontier , Spectrum , fuboTV , Philo , and Verizon Fios .AccuWeather Now is now available on your preferred streaming platform..

Sat Feb 5 , 2022
The numbers: The U.S.added a robust 467,000 jobs in January and hiring was much stronger at the end of 2021 than originally reported, pointing to the resilience of a rapidly recovering economy despite successive waves of the coronavirus. The unemployment rate rose to 4% from 3.9%, the government said Friday […] 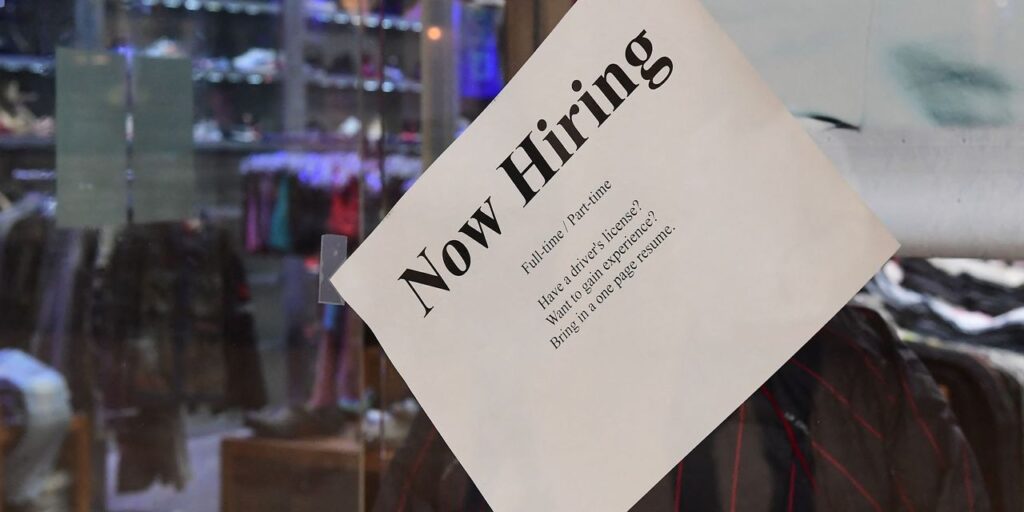