There is something gratifying about the no-nonsense, fed up women who just let ’em have it.This week has brought us two extraordinary examples.One called herself “Black Jesus” on Amtrak.The other is now trending on Twitter for her punchline to Virginia Gov.Glenn Youngkin: #readtheroombuddy.

They’re women who take a stand against those bellicose, passively belligerent acts that jank up our daily lives, who speak for thousands — in their own special way — and leave the rest of us breathless, whispering, “Brava.”And they’ve all been on this Earth long enough to be sick of keeping quiet.Thursday was when Stacey Patton, a.k.a.Black Jesus, made an appearance on the Northeast Regional headed to Trenton.Patton, a journalism professor at Howard University, book author and frequent contributor to The Washington Post, was in business class on an Amtrak train from D.C.when she decided she’d had enough of The Guy.You’ve seen him.

Manspreading, maskless, perhaps, voice booming through the quiet of a train, Metro, bus, space.She’s a master storyteller, so I’ll let her tell the tale, as she posted it on social media:“There is a white man.Southern.Loud.And important.Let’s call him Chuck.I’m about 8 rows behind him.He’s been on his cellphone since we boarded.He’s talking loud, as if he’s in his home office.Everyone else in the train car seems unbothered.But I’m annoyed.“HERE’S MY CELL NUMBER.SEVEN ZERO THREE … ”I write down his number.I dial *67 then 1-703- …“GIMME A SEC.

GOT ANOTHER CALL COMIN’ THROUGH.YELLL-OOOO?”I whisper.

“Hello, this is Black Jesus calling.I’m riding on Northeast bound train 176.I hope y’all find the right interns for your search.You will make it to New Brunswick in time for that teams meeting.I also think your pitch for the new project, with some minor adjustments, will be well received by the rest of the team.

And I recommend either the Frog and the Peach or Steakhouse 85 for dinner tonight.But for right now, Imma need you to lower your voice while riding this train.In my name, Amen.”Click.Dude actually stood up and looked around frantically.I kept looking at my computer like I’m not Black Jesus.”That post quickly went viral, with more than 30,000 shares and nearly nine thousand people saying “Amen” and “Thank you.”Across the Potomac River, a little after Black Jesus spoke on Thursday, Gov.

Glenn Youngkin encountered another superwoman.This one was trying to buy groceries at an Alexandria Safeway where Youngkin had decided to promote a grocery tax cut.He was maskless, unlike all the workers and most of the customers around him.Gov.Youngkin wants parents to choose.Like he did? “Governor, where’s your mask?” a shopper asked , as she finished checking out two registers away.“We’re all making choices today,” Youngkin replied.“Yeah, look around you, Governor, you’re in Alexandria,” the woman said.

“Read the room, buddy.”Someone in the video approached her, and we can’t hear what he says, but she won’t take it from him, either.“He’s my governor too — I get to say what I want,” she said.Amen.And brava.The union that represents Safeway’s workers said the same in a statement denouncing Youngkin’s maskless appearance as “irresponsible.”“By refusing Safeway’s request that all customers wear masks and by failing to keep a six-foot distance from our members, he put their lives and health at risk.

Gov.Youngkin owes our members and every customer present at Safeway an apology,” said UFCW Local 400 President Mark P.Federici.The thing about these women — besides not giving a fig about anyone else and speaking their minds — is they aren’t just full of hot air.They’re people of substance.People like Juli Briskman, who became famous for a photo of her bike-riding backside as she showed her middle finger to former president Donald Trump’s motorcade when it roared past her in 2017.She flipped off President Trump — and got fired from her government contracting job Briskman, who lost her job in the whole fiasco, ran for office and is now a hard-working county supervisor.By total coincidence, both Patton and the shopper performed quiet acts of kindness that go beyond their public-minded jobs as educators.Patton just finished the I da B.Wells-Barnett Textbook Fund campaign, raising more than $31,000 to help buy textbooks for students at Howard University and Morgan State University.(And we believe we know who #readtheroombuddy is, and if we’re correct — waiting for her to verify — she’s done some extraordinary work in her community too.)With hearts as big as these men’s hubris, these women have earned the right to speak their truths.Amen, sisters.And brava..

Sun Feb 6 , 2022
By a voice vote Friday, the Republican National Committee approved a resolution to censure Representatives Liz Cheney of Wyoming and Adam Kinzinger of Illinois, the two Republicans who sit on the House committee investigating the January 6 attack on the U.S.Capitol . A few members shouted “nay,” but the “aye” […] 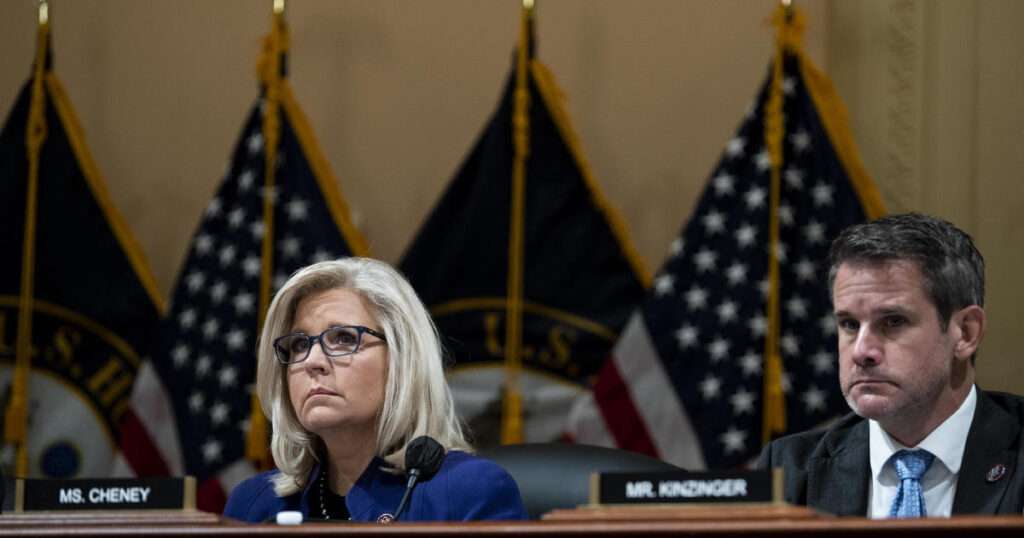