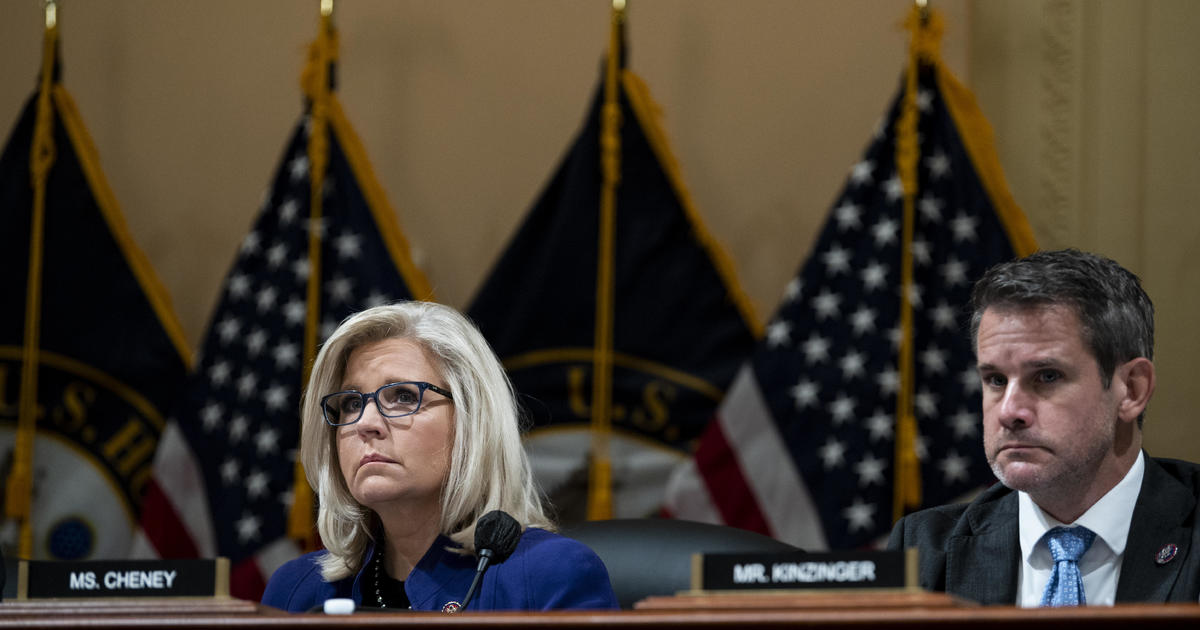 By a voice vote Friday, the Republican National Committee approved a resolution to censure Representatives Liz Cheney of Wyoming and Adam Kinzinger of Illinois, the two Republicans who sit on the House committee investigating the January 6 attack on the U.S.Capitol .

A few members shouted “nay,” but the “aye” votes were overwhelming.

“Liz Cheney and Adam Kinzinger crossed a line,” RNC Chairwoman Ronna McDaniel said in a statement after the vote.”They chose to join Nancy Pelosi in a Democrat-led persecution of ordinary citizens who engaged in legitimate political discourse that had nothing to do with violence at the Capitol.That’s why Republican National Committee members and myself overwhelmingly support this resolution.”

The resolution censures Cheney and Kinzinger and calls on the RNC to “immediately cease any and all support of them as members of the Republican Party for their behavior which has been destructive to the institution of the U.S.House of Representatives, the Republican Party and our republic, and is inconsistent with the position of the conference.”

The resolution attacks Cheney and Kinzinger for “participating in a Democrat-led persecution of ordinary citizens engaged in legitimate political discourse.” The Justice Department has charged over 700 people for their role in the January 6, 2021, attack on the U.S.Capitol, when thousands of former President Donald Trump went to the Capitol to try to stop Congress from affirming Joe Biden’s victory in the presidential election.Five people died as a result of the rioting.

On Twitter, Cheney disputed the notion that what transpired on January 6 was “legitimate political discourse.”

A previous version of the resolution would have called on House Republicans to remove Cheney and Kinzinger from the GOP conference, but the measure was changed to a censure.

“Their actions have been egregious towards our principles, what we stand for and putting their own personal bias above what’s best for our country,” Tamara Scottt, an RNC member from Iowa, told CBS News.

“It’s a sad step, but one that the majority of our committee thought was necessary.”

Henry Barbour, an RNC member from Mississippi and nephew of former RNC Chairman Haley Barbour, was among the few members to vote against the resolution, but said he was glad to see the language changed to censure the representatives.

Barbour said January 6 was “a sad day,” but many RNC members have become frustrated with the way the House committee is conducting its investigation.

“I understand people’s frustration that this committee has become really partisan and targeting people who have nothing to do with January 6, but I think we need to be focused on 2022 and I find this to be more of a distraction,” Barbour told CBS News.”I understand why people are upset with Kinzinger and Cheney, but they’re still Republicans and we don’t have to agree with them on everything.”

Separately, the RNC members from Wyoming signed a letter to allow the RNC to get involved in Cheney’s primary challenge and provide support for her opponent.The RNC is not otherwise supposed to provide resources to candidates until they have won the nomination or are running unopposed in a primary.

“It’s an internal rule that’s available to us and we just chose to use it,” Wyoming GOP Chairman Frank Eathorne told CBS News.

The rule has been used frequently in open primaries, according to New Jersey RNC member Bill Palatucci.Republicans in New Jersey used it recently to support Tom Kean Jr., who is running in New Jersey’s 7th Congressional District.

“I’ve never seen it done against a sitting member of Congress,” Palatucci said.”That’s harball.I respect that and they don’t need the full (RNC) to do that.”

Palatucci, who did not back the censure resolution, said that is “small potatoes” compared to the authorization to spend against Cheney.

He said it sends a bad message to donors that the RNC will “use your money to go after fellow Republicans.”

Kinzinger said in a statement Thursday that he has “no regrets about my decision to uphold my oath of office and defend the Constitution.”

“I will continue to focus my efforts on standing for truth and working to fight the political matrix that’s led us to where we find ourselves today,” he said.

Cheney said in a statement that “the leaders of the Republican Party have made themselves willing hostages to a man who admits he tried to ‘overturn’ a presidential election and suggests he would pardon Jan.6 defendants, some of whom have been charged with seditious conspiracy.”

“This is further proof that Liz Cheney has completely lost her ability to be effective in Congress for the people of Wyoming,” Harriet Hageman, the Trump-backed candidate running against Cheney, said in a statement.

“She doesn’t have allies in the Republican Party, and the Democrats only see her as a temporary and useful tool to achieve their partisan ends.She spends every minute of every day engaged in her personal vendetta against Donald Trump, and that is not why Wyoming sent her to Congress.”

RNC members have spent part of the week at the lavish Grand America Hotel discussing party business behind closed doors.Among the topics on the agenda have been the site of the 2024 Republican National Convention and a potential future ban on presidential candidates participating in debates sponsored by the Commission on Presidential Debates.

Harmeet Dhillon, an RNC committeewoman from California, said the commission has “betrayed” its non-partisan roots and it’s time for a different format.

“As far as I’m concerned, it’s dead to me,” Dhillon told CBS News.”We should scrap it and start fresh with some organization that doesn’t have the baggage and is willing to play ball and negotiate with both sides.”

“We are not walking away from debates,” RNC Chairwoman Ronna McDaniel told members on Friday.

“We are walking away from the Commission on Presidential Debates because it’s a biased monopoly that does not serve the best interests of the American people.”

Midterms are historically tough for the party that controls the White House, and Republicans are feeling optimistic about their chances to make big gains later this year, citing President Biden’s low approval ratings and polling that shows many Americans believe the country is heading in the wrong direction.

A recent Politico/Morning Consult poll showed that 65% of Americans believe the country is on the wrong track.

“Across America, voters are fed up with Joe Biden’s failing radical agenda,” McDaniel said.”We are in this room because we know elections have consequences.This is why we must win and we are going to win back the House and the Senate in November.”

Aaron Navarro and Kathryn Watson contributed to this report.

Trending News Transcript: Senator Marco Rubio on “Face the Nation” The January 6 trial that will set the standard for hundreds to follow Virginia judge blocks governor’s order allowing students to opt out of mask mandate What’s behind the push for a fourth stimulus check Pence speaks out against Trump Adam Brewster CBS News political reporter.

Sun Feb 6 , 2022
Car companies want to rake in billions by asking customers to subscribe to vehicle features.Today, carmakers offer subscriptions for automatic high beams, remote start, and other functions.Consumers don’t seem as excited about the trend as car companies.Get the latest tech news & scoops — delivered daily to your inbox. Loading […]