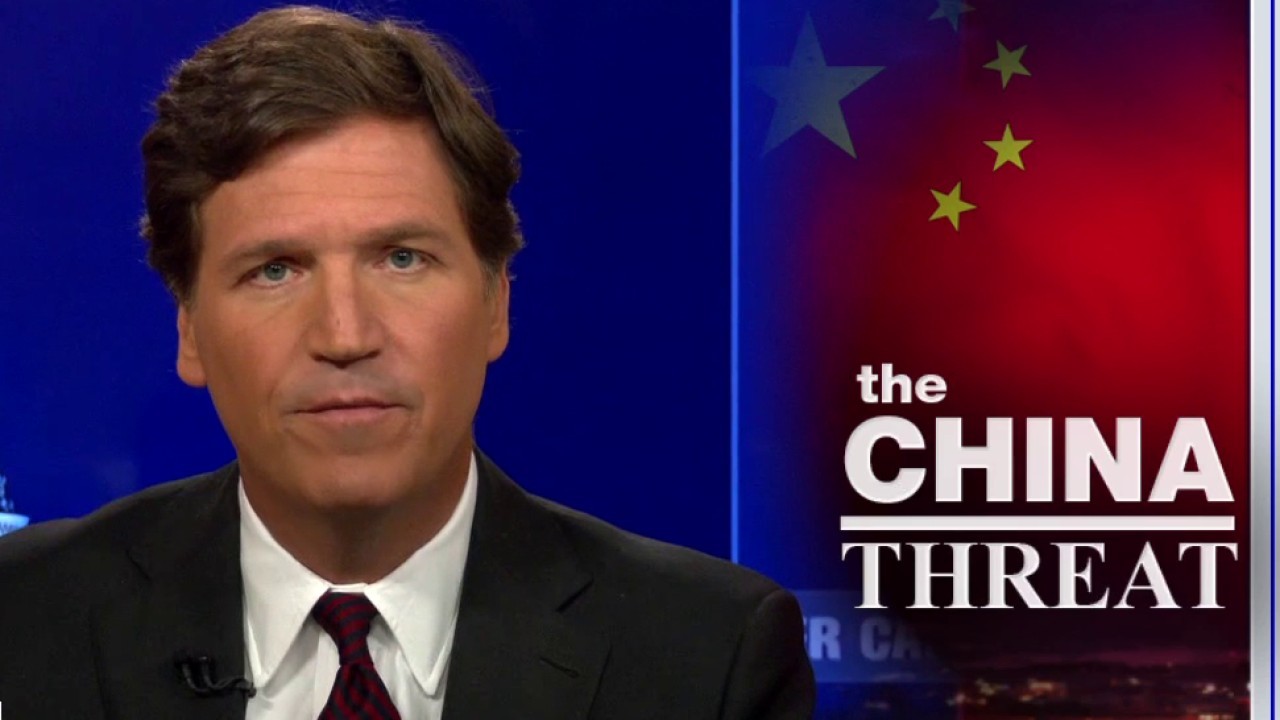 When permanent Washington pushes for war with Russia , who benefits? We don’t ask that question enough.The United States certainly doesn’t benefit.That’s obvious to anyone who thinks about it for a second.It’s so glaringly obvious, in fact, that the people pushing this war immediately denounce you as a traitor if you point that out.

They’re betraying our country’s interests, but somehow you’re the one who’s disloyal.Ukraine’s borders are sacred.Our borders are racist.Shut up, Putin stooge.

But wait a second.Why is it disloyal to side with Russia but loyal to side with Ukraine? They’re both foreign countries that don’t care anything about the United States.Kind of strange.It’s all an absurd performance, but it’s all they’ve got in the end.The fact is, Ukraine is strategically irrelevant to the United States.No rational person could defend a war with Russia over Ukraine.Nobody thinks a war like that would make America safer or stronger or more prosperous.Have you taken a look at our economy recently? Dangerous levels of inflation, a workforce in disarray.

Wildly chaotic swings in financial markets, in case you ever noticed.TUCKER CARLSON: OUR ATTENTION TO UKRAINE DRIVES RUSSIA INTO ALLIANCE WITH THE CHINESE GOVERNMENT Well, joining a conflict in Eastern Europe fix any of that? Come on.

Of course not.It’ll make it worse.

If the neocons aren’t restrained, and soon, Americans are going to be a lot poorer.

So why are they doing this? That’s a complex question.Hubris, stupidity, the damage, psychological makeup of our leaders.Massive lobbying campaigns by Ukrainian politicians and American defense contractors.

All of those factors play a role in this.

No tragedy has a single cause.But what’s not at all complicated is who benefits from our conflict with Russia.China benefits, period.

The Chinese government is the only certain winner here.We can give you many examples to illustrate this, but consider the latest economic sanctions the White House has proposed against Russia.

The Biden administration may use something called the foreign direct product rule to cut off Russia’s supply of semiconductors made with American technology.This would, in the hopeful assessment of The Washington Post “Potentially deprive Russian citizens of some smartphones, tablets and video game consoles.”So depriving Russian citizens is good, we’re told, because Russian citizens are bad.OK, but what are the long-term effects on us? Russians are still going to have smartphones.They’ll just get their components somewhere else, meaning from China .The Chinese have already pledged to help, and they have every incentive to make good on that promise.

In other words, the Biden administration will succeed in continuing to drive our two main global rivals closer to a permanent alliance with one another.

How does that help America? Well, it doesn’t.Over time, it’s dangerous, and not just militarily.CAN BLINKEN’S DIPLOMACY WITH RUSSIA STILL WORK? The only reason the U.S.government can enforce international sanctions is that the U.S.dollar is the world’s reserve currency.Russia and China don’t like this, obviously.

So let’s say they convinced other global powers that the US government was abusing its monopoly on monetary control.If they do it to us, they might do it to you, they would say.And then other countries decided to drop the U.S.dollar in favor of a new currency.Where would that leave us? Well, suddenly the United States would no longer be able to run an economy based on debt.We would be impoverished immediately overnight.

Has no one in Washington thought of this? Apparently not.Imposing tough new sanctions every few months feeds their moral vanity.

It makes them feel like good people.What fools they are.

Both parties, by the way, participate in this.Preening about sanctions on television is a lot easier than improving the lives of people in your own country.So that’s what they do.

Here’s Republican Sen.Joni Ernst of Iowa telling you that protecting Ukraine’s sacred borders is much more important than, say, saving Americans in Des Moines from overdosing on drugs.JONI ERNST: So we do need to go ahead and impose sanctions on Russia.Now we need to show them that we mean business and we will be there for Ukraine should they invade.Certainly, we need to make sure that any defensive aid is in the hands of the Ukrainians, as well as much lethal aid as we can provide at this time.

Those are our leaders, totally ignorant, just reading the script.It’d be nice to hear someone in the press corps, because it’s their job, ask the obvious follow up, which would be: Why exactly, Sen.Ernst, do you believe it’s so vital to send more lethal aid to Ukraine and to “go ahead and impose” more sanctions on Russia? Why? How would she answer that question? We’ll never know how she’d answer, because no one in the media would ever ask her.

Reporters are the most bovine of the herd animals.If the other kids say it’s a good idea, they assume that it is.

Journalists feel that way about everything, but especially about armed conflict.BIDEN SWIPES FOX NEWS REPORTER FOR PRESSING HIM ON GROWING RUSSIA-UKRAINE CONFLICT: ‘WHAT A STUPID QUESTION’ The longest war in American history just ended this fall when we left Afghanistan.The new consensus in Washington is: We need another war, now.

And that view is especially prevalent in TV news.This Teleprompter jockey tried to push our Russia hating secretary of state into hating Russia even more.ANTONY BLINKIN: We are proceeding on both pass at the same time.We’ll be ready.

Either way, the choice is Vladimir Putin’s book.MARGARET BRENNAN: But what are you negotiating? If Russia’s demands are nonstarters, I mean President Biden has already said Ukraine is not going to join NATO anytime soon, you’ve made this offer of reciprocal military exercises, what’s left to talk about? What’s left to talk about? Too much diplomacy, Mr.Secretary, not enough killing.That’s her position, apparently.Russian President Vladimir Putin speaks during a news conference after his meeting with U.S President Joe Biden at the ‘Villa la Grange’ in Geneva, Switzerland in Geneva, Switzerland, Wednesday, June 16, 2021.(AP Photo/Alexander Zemlianichenko, Pool) ((AP Photo/Alexander Zemlianichenko, Pool)) Max Boot of The Washington Post fervently agrees with this.

At this point, every project in Max Boot’s life has collapsed into disaster, from his personal affairs to the war in Iraq, which he promoted endlessly.Having come to middle age, Max Boot is unequivocally a failure.But he’s looking for one last war to redeem at all.He’s thinking conflict with nuclear – armed Russia could be that war.MAX BOOT: We should be arming the Ukrainians like crazy.We should be preparing for guerrilla warfare.

If the Russians go in and I think the most important thing we can do right now is to lay out a menu of sanctions so that Putin knows exactly what’s going to happen to him if he goes over the line.Because right now, with these vague threats, he can be left with a feeling, well, maybe the U.S.and the Europeans, maybe we’re not.We’re not really going to do anything.Again, you have to ask yourself, why is it more patriotic to take one country’s side than the other country’s side? We have no obligation to defend any country, either one of these countries.Neither one is American.Neither one has the same interests as we do.

Why is it wrong to support one and not the other? What’s wrong is to support either one of them.Their interests are not the same as ours.They’re very different.Max Boot doesn’t care.Arm the Ukrainians, prepare for guerrilla warfare.Only a man completely insulated from the consequences of his bloodlust could talk like that.There will always be another think tank job for Max Boot and people like Max Boot.

RUSSIA ‘WILL IGNORE’ US TROOPS SENT TO EASTERN EUROPE: FRED FLEITZ But what’s Politico’s excuse? The fashionably liberal political blog has been pushing for war in Ukraine for months now.Why? What’s in it for them? Well, let’s see.A few days ago, Politico published this terrifying headline “Psaki: Russia could at any point launch an attack in Ukraine.” The piece goes on to promise that “experts and policymakers are now preparing for a range of escalatory measures.” Well, that sounds scary.We better send billions more in military hardware to Ukraine right away.

Beneath the headline, you learn why Politico is interested.Because the story is “presented by Lockheed Martin.” Aha! In other words, defense contractors think it is high time to spend much more on defense contracting in Ukraine.

Politico is happy to make their case in exchange for money.

Over at The Washington Post, you may have seen an oped with this headline: “Biden must show that the United States stands ready to support Ukraine militarily if necessary.” Now, that piece was written by a man called Michael Vickers, who’s Michael Vickers, among other things.Michael Vickers sits on the board of the weapons contractor BAE Systems.That would seem relevant because war with Russia would be potentially, in any case, highly profitable for VA systems.

CLICK HERE TO GET THE FOX NEWS APP So how does this look from across the world? Well, the Chinese must be watching this happen with their jaws open, completely delighted.They can’t believe their good fortune.They watch as the entire political leadership class of the United States runs at full speed in the wrong direction.Away from Asia, which is so clearly the future and toward the murky past on the fringes of Eastern Europe.Ukraine.

Russia.The Chinese must be wondering how could these people be so stupid and so self-destructive? This article is adapted from Tucker Carlson’s opening commentary on the January 21, 2022, edition of “Tucker Carlson Tonight.”.

The Best Time to Buy a TV, Mattress and More: Here’s Your Guide

Wed Jan 26 , 2022
[Save Money] Here’s Your Month-by-Month Guide to the Best Time to Buy Almost Everything Some purchases are tough to plan: car repairs, patches for a leaky roof, a working furnace right before the big snowstorm hits. But more often than not, you can plan ahead for life’s necessities — and […]