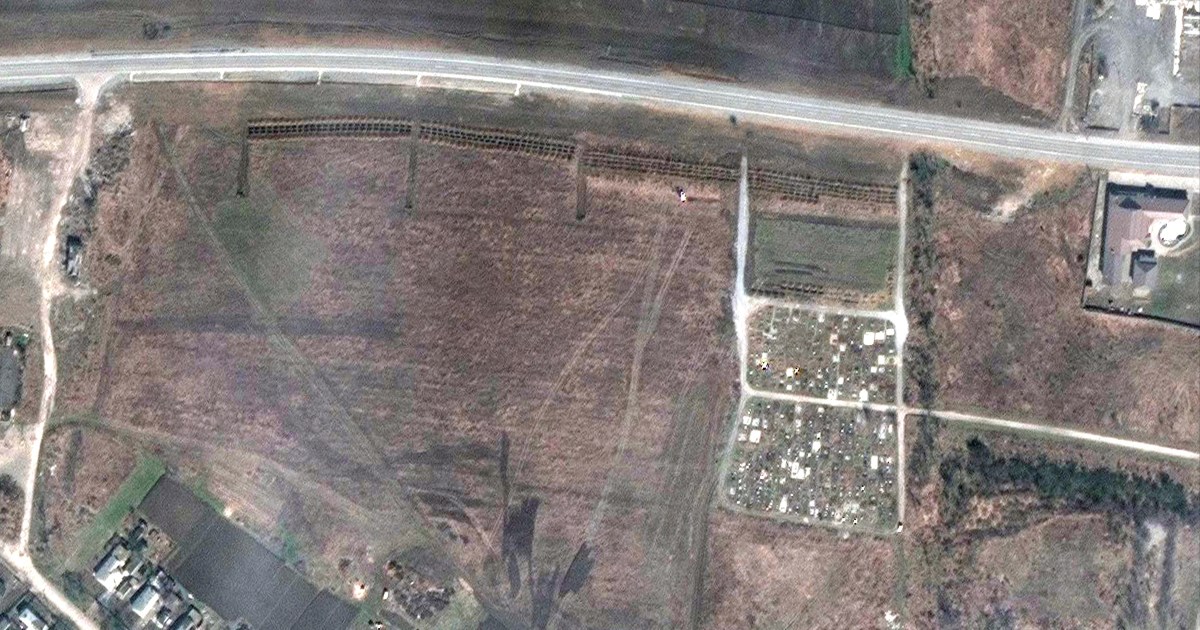 US company says mass grave site in Manhush village has expanded in recent weeks to contain more than 200 new graves.

A satellite image shows an overview of a cemetery and expansion of the new graves in Manhush, near Mariupol, Ukraine on April 3, 2022 [Satellite image 2022 Maxar Technologies/Reuters] Published On 21 Apr 2022 21 Apr 2022 facebook

Satellite imagery from near the besieged Ukrainian port city of Mariupol shows a mass grave site that has expanded in recent weeks to contain more than 200 new graves, a private US company has said.

Maxar Technologies, which collects and publishes satellite imagery of Ukraine, said on Thursday that a review of images from mid-March through to mid-April indicates that expansion of the mass grave began between March 23 and 26.

The site lies adjacent to an existing cemetery in the village of Manhush, 20km (12 miles) west of Mariupol, the company said.

Mariupol’s mayor, Vadym Boychenko, said in a Telegram post that as many as 9,000 civilians could be buried in the mass grave.

“The greatest war crime of the 21st century has been committed in Mariupol,” he said.

“This is the new Babi Yar,” the mayor said, referring to the site of multiple Nazi massacres of Ukrainian Jews in 1941.

“Then Hitler killed Jews, Roma and Slavs.And now Putin is destroying Ukrainians.He has already killed tens of thousands of civilians in Mariupol,” he said.

“This requires a strong reaction from the entire world.We need to stop the genocide by any means possible.”

In a separate statement earlier on Thursday, Boychenko alleged the Russians had dug huge trenches near the village of Manhush and were “hiding their war crimes” by dumping bodies there.

On Thursday evening, Ukrainian media published the satellite photos of Manhush, showing what they said were mass graves similar to – although much larger in size from – those discovered in the Kyiv suburb of Bucha.The accuracy of these claims and images could not be immediately verified.

(Al Jazeera) Battle for Mariupol Russian President Vladimir Putin claimed victory on Thursday in the battle for Mariupol, even as he ordered his troops not to take the risk of storming the giant steel plant where the last Ukrainian defenders in the city remain holed up in a maze of underground passages.

Instead of attack, Putin directed his forces to seal off the Azovstal plant “so that not even a fly comes through”.

After nearly two lethal months of bombardment that have largely reduced Mariupol to a smoking ruin, Russian forces appear to control the rest of the strategic southern city, including Mariupol’s vital, but now badly damaged, port.

Some 2,000 Ukrainian troops, by Moscow’s estimate, have held out for weeks at the sprawling steel plant despite constant bombing by Russian forces and repeated demands for them to surrender.

About 1,000 civilians are also trapped in the plant, according to Ukrainian officials.

Instead of sending troops in to finish off the defenders in a potentially bloody frontal assault, Russia apparently intends to maintain a siege of the steelworks and wait for the fighters to surrender when they run out of food or ammunition.

The capture of Mariupol would represent the Kremlin’s biggest victory yet of the war in Ukraine.

Fri Apr 22 , 2022
The Boring Co., a startup founded by Elon Musk, has raised new capital to fund the billionaire investor’s vision to alleviate traffic . Vy Capital and Sequoia Capital led the $675 million funding round that valued the company at about $5.7 billion, the company said in a press release Wednesday.Peter […]