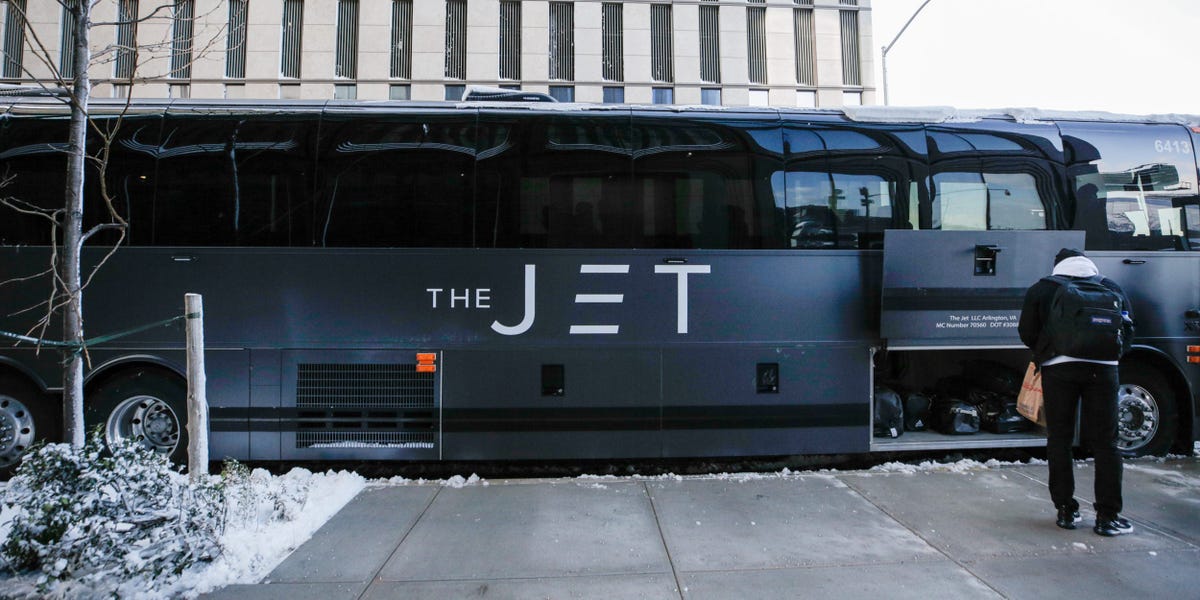 I tried the Jet, a luxury bus startup that travels between New York City and Washington DC.Tickets start at $99, which is more expensive than a comparable Amtrak ticket or a ride on a budget bus service.The snacks, drinks, kind attendant, and comfortable motion-canceling seating made my carsickness worth it.I took a luxury bus service from New York City to Washington DC for $99, and it was one of the plushest travel experiences I’ve ever had.

But more on that later.The seats at the front of the bus.Brittany Chang/Insider I, like many other travelers in the US, do not have fond memories of sitting in intercity buses like Greyhound or Megabus.A Greyhound bus in Texas in 2021.

Jose Luis Gonzalez/Reuters Enter the Jet, a luxury bus startup looking to provide another option different from those sometimes-uncomfortable budget bus experiences.The Jet on a cold January morning.Brittany Chang/Insider Unlike the classic Flixbus or Greyhound, the Jet has comfortable seats, in-ride treats, and fast Wifi, among other bonuses.It’s more expensive, but the company is betting riders who can afford to will pay for the luxury and exclusivity.The seats.Brittany Chang/Insider Chad Scarborough, the Jet’s founder and CEO, predicts the company’s passengers are the top one to 2% of bus riders, or “people who want a nicer option” but don’t want to pay for an Amtrak, he said the first time I toured one of its buses in late 2021.

Tripperbus, which also calls itself a “first-class bus service,” runs a similar route from Arlington, Virginia, and Bethesda, Maryland to New York City.

But the Jet drops off and picks up its passengers right in the heart of DC at Metro Center, about a 10-minute walk to the White House.The White House south facade, in Washington, D.C.Raymond Boyd/Getty Images On January 7, the morning after New York’s first snow in the new year, I decided to take a ride on the Jet for a roughly five-hour ride from New York City to Washington, DC to test its offering.The Jet on a cold January morning.Brittany Chang/Insider The Jet only has two departure times from New York: 11 a.m.and 6:30 p.m.I booked the former hoping to get some work done on my Friday afternoon ride.The seats.

Brittany Chang/Insider The Jet departs from Hudson Yards.This outdoor departure away from any terminal means I didn’t have to navigate the large, often busy corridors of an indoor station.It also means passengers board from the curb, just like discount carrier Megabus.The Jet on a cold January morning.

Brittany Chang/Insider The 45-foot-long black coach with “THE JET” embossed on side told me I was in the right place.I arrived earlier, so I had plenty of time to pick up breakfast before checking in with the bus attendant, who operates like a flight attendant.The Jet on a cold January morning.Brittany Chang/Insider I already reserved my spot on the 14-seat bus so there was no need to rush onto the vehicle in hopes of getting a prime seat or space in the luggage compartment.

My messy seat.Brittany Chang/Insider And the rows of seats are six feet apart as per COVID-19 protocols, providing ample legroom and space for my bags.

The back of the bus.Brittany Chang/Insider “We’ve had some people tell us [this] feels safer than taking a train or a plane because there’s so few people,” Scarborough said in 2021.The bathroom.

Brittany Chang/Insider And I agree.Besides me, there were only nine other people on the bus including the driver and attendant.Everyone was required to mask up unless they were eating or drinking.

Snacks on the Jet.

Brittany Chang/Insider There’s also a UV filtration system that sanitizes the air every 10 minutes, according to the company.The galley at the rear of the bus.Brittany Chang/Insider Other than the person sitting next to me (who I live with) everyone felt distanced from my seat, making the Jet feel safer than any plane ride I’ve been on during COVID-19.

And unlike planes, the Jet is also now enforcing a vaccine mandate.The seats.

Brittany Chang/Insider The pre-booked seats, ample spacing, and warm attendant made for one of the safest-seeming and most relaxing boarding experiences I’ve ever had on any mode of transportation.Inside the Jet.

Brittany Chang/Insider All I had to do was get on the bus, throw my bags on the floor in front of me, confirm my seat with the friendly attendant, and I was all good to go.My messy seat.Brittany Chang/Insider Throughout the bus ride, the attendant checked on the passengers and offered us a selection of complimentary snacks, water, wine, beer, coffee, and soda.And at the end of the bus ride, she collected our trash.Snacks on the Jet.Brittany Chang/Insider I don’t drink soda, and I passed on the free booze (I was, after all, still working), but just having these options made the Jet feel more luxurious than an economy seat on a plane.The galley at the rear of the bus.

Brittany Chang/Insider We were offered The Jet-branded blankets to use during the bus ride, but I was already bundled in a thick sweater, so I passed.The seats.

Brittany Chang/Insider There’s also a bathroom at the rear of the bus next to the attendant’s galley.The clean bathroom — although smaller than Amtrak’s — had the basics: a toilet, sink, mirror, and hand sanitizer.The bathroom.Brittany Chang/Insider But because it was freezing the night before, the bathroom pipes were frozen, putting the porcelain throne out of commission for the first half of the ride.The bathroom.

Brittany Chang/Insider Luckily our driver scheduled a quick bathroom stop halfway through the journey, which was perfect for a quick stretch.The Jet on a cold January morning during out bathroom stop.

These seats are the Jet’s pièce de résistance and its biggest draw.A reclined seat.

Brittany Chang/Insider The seats use a suspension technology developed by Bose to block 90% of the bus ride’s uncomfortable bumps and movements.

The bathroom.Brittany Chang/Insider The motion-canceling seats did a great job of blocking the smaller bumps, but I could still feel the rocking motion of the bus.This was expected and would have otherwise been fine if I hadn’t been staring at my laptop.The seats.Brittany Chang/Insider The longer I stared at the screen, the harder it became to read smaller blocks of text, a side effect that brought me back to my concussion four months ago.The galley at the rear of the bus.

Brittany Chang/Insider But when I looked around, most other passengers were still on their laptops and phones, a sign that nobody else was feeling as sick as I was.A view out the windows while we were still in Manhattan.Brittany Chang/Insider Finally, after about five hours on the road, we arrived in DC at around 4 p.m.I quickly gathered my belongings, said my thank yous, and ran out to get some fresh air.The seats at the front of the bus.Brittany Chang/Insider But honestly, despite my carsickness, the Jet was the most comfortable intercity travel experience I’ve ever had (noting that I’ve never used a luxury bus service before).The Jet on a cold January morning.Brittany Chang/Insider Boarding and departing the bus in an uncrowded outdoor area was an underrated luxury.

The galley at the rear of the bus.Brittany Chang/Insider A business class ticket for Amtrak’s Acela departing at 11 a.m.starts at $90, while a coach ticket for the 11:35 a.m.Northeast Regional sits at almost $50.It’s also worth noting that an Amtrak on the same route is about one-and-a-half to two hours faster and won’t have to stop for traffic or bathroom breaks.An Amtrak train pulls out of Union Station on Wednesday, April 7, 2021.

Meanwhile, the cheapest 11:00 a.m.bus ticket (Flixbus) on the same day is a mere $18, making it about one-fifth as costly as a ticket for The Jet.

If you’re looking for luxury, the Jet may be your best choice.Though it’s slower and more expensive, there’s no arguing it’s the most comfortable option.The galley.

Tue Jan 18 , 2022
Pollution from plastics is a global emergency in need of a robust UN treaty, according to a report. The Environmental Investigation Agency (EIA) says there’s a cascade of evidence of harm from plastics. It argues that the plastic pollution threat is almost equivalent to climate change. The air we breathe […] 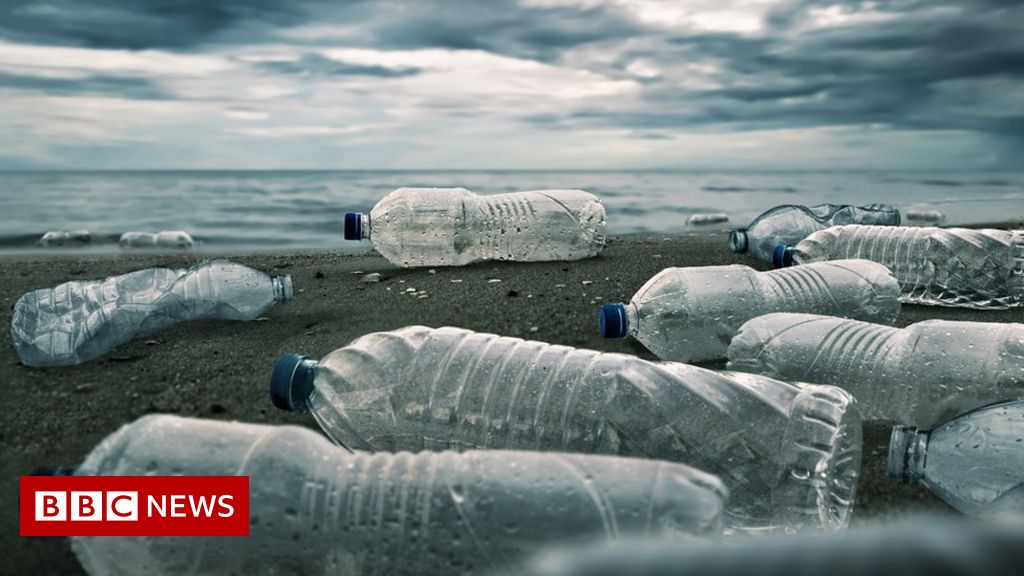