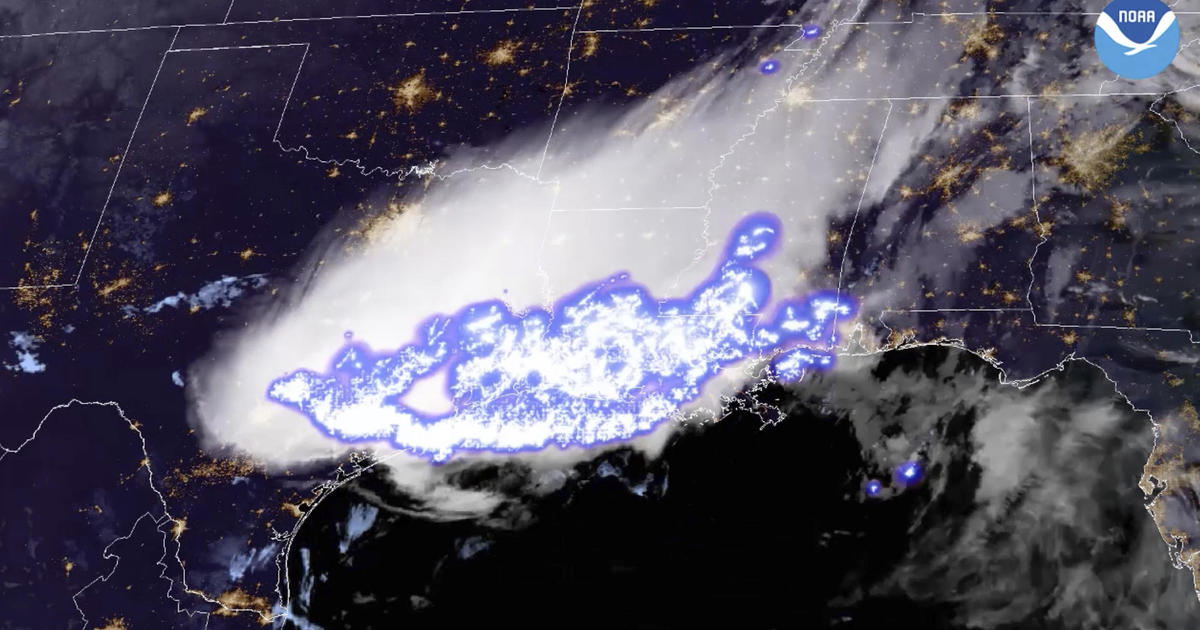 A bolt of lightning that stretched nearly 500 miles across three U.S.states is the new world record holder for longest flash.

The single flash extended 477.2 miles across Texas, Louisiana and Mississippi in April 2020, the World Meteorological Organization said Monday.That beat the old record set in 2018 in Brazil of 440.6 miles.

Also in 2020, a single lightning flash over Uruguay and northern Argentina lasted 17.1 seconds, nipping the old time record of 16.7 seconds.

Normally lightning doesn’t stretch farther than 10 miles and lasts less than a second, said Arizona State University’s Randall Cerveny, who is the chief of records confirmation for the meteorological organization.

“These two lightning flash records are absolutely extraordinary,” Cerveny said in an email.

Both were cloud-to-cloud, several thousand feet above the ground, so no one was in danger, he said.

These records, which are not linked to climate change, were spotted and confirmed thanks to new satellite tracking technology.Both regions are two of the few places in the world prone to the type of intense storms that can produce what are called “megaflashes, ” Cerveny said.

How lightning works As Ben Franklin famously demonstrated, lightning is a form of electricity .

Thunderclouds are made up of cold air that forms ice crystals and warm air that forms water droplets.During a storm, these crystals and water droplets collide to create an electrical charge in the clouds.The charges separate with the positive charges or protons at the top of the cloud and the negative charges or electrons at the bottom.When the negative charge gets strong enough, energy is released from the cloud and goes through the air to a place with an opposite charge, such as the ground or a tree or even a person.

And lightning is extremely hot .

According to the National Weather Service, “As lightning passes through air, it can heat the air to 50,000 degrees Fahrenheit (about 5 times hotter than the surface of the sun).”

Lightning is very common and strikes somewhere in the United States nearly 25 million times per year.Although summer months are prime season for lightning, people can get struck at any time of the year .

John Jensenius, a lightning specialist for the National Weather Service, told CBS News that 80 percent of lightning fatalities occur in men.He suggested several possible explanations, including that men are unaware of all the dangers associated with lightning, are more likely to be in vulnerable outdoor situations, or are unwilling to be inconvenienced by the threat of lightning.

Amy Kraft contributed to this report.

Trending News Tom Brady announces his retirement: “I have tried my very best” Federal prisons on nationwide lockdown after 2 Texas inmates killed Some Trump records were torn up, taped back together, Archives says Novavax could offer unvaccinated Americans a new option, if FDA agrees A cause of America’s labor shortage: Millions with long COVID Download our Free App For Breaking News & Analysis Download the Free CBS News app.

Books on race, sexuality are disappearing from Texas schools in record numbers

Wed Feb 2 , 2022
KATY, Texas — From a secluded spot in her high school library, a 17-year-old girl spoke softly into her cellphone, worried that someone might overhear her say the things she’d hidden from her parents for years.They don’t know she’s queer, the student told a reporter, and given their past comments […]