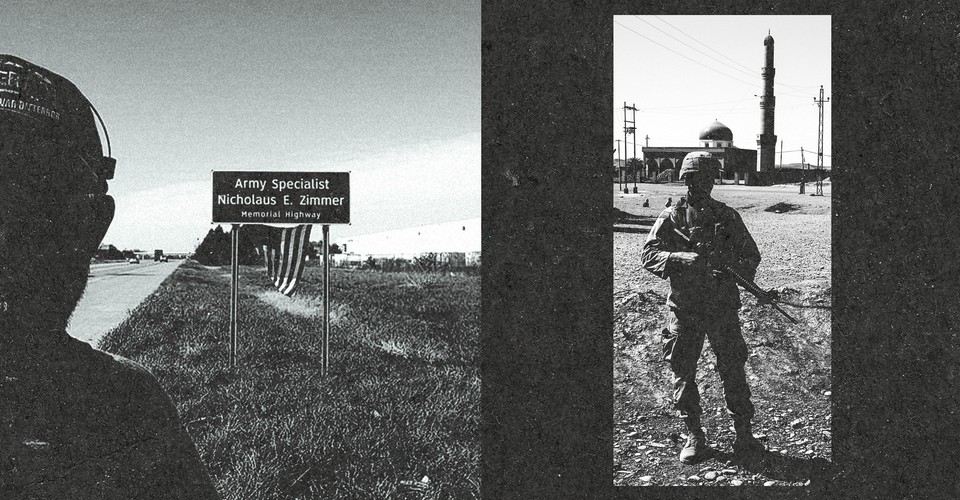 I could hardly make out the words on the sign, but I knew what they said.

By Hugh Martin Courtesy of Hugh Martin / The Atlantic December 31, 2021, 7 AM ET Share S outh of downtown Columbus, Ohio , lost on the way to a tailgate, I saw the road sign bearing his name.The brown aluminum placard flashed between passing cars.I’d been holding my phone, listening to directions, and I dropped it.I could hardly make out the words on the sign, and then it disappeared behind semis, but I knew what they said: Army Specialist Nicholaus E.Zimmer Memorial Highway .Fifteen years earlier, when he’d been killed by a rocket-propelled grenade near Kufa, Iraq, I was on a base four hours north, staring at dark hills and crooked coils of concertina wire during a quiet 12–4 a.m.guard-duty shift.

I thought about merging into the right lane to pull over.

A guy from our basic-training platoon, now a truck driver, had stopped on this freeway years back and taken a selfie with the sign.

A bunch of us “liked” it on Facebook.Guys typed things like “RIP Nick” and “Miss you brother.” I always told myself I’d go see the sign.I never had.

As I moved with the hundreds of other vehicles, I was angry to be among the anonymous mass passing his name.No one here fucking knows Zimmer , I thought.

I also sensed a self-deprecating awareness: Yes, how sad , I’d seen the name of a dead friend on a road sign and now felt a numb indifference to the rest of the day—to the first football game of the season for the nationally ranked Ohio State Buckeyes.

If I pulled over, what would I do anyway? Was I really going to loop around, park on the side of the highway, take a photo? Touch the metal sign? Run my hand over it?

I wanted to call someone from basic.Carter, in Missouri.Hernandez, in Texas.Just to tell them that I’d seen Nick’s sign.

But I didn’t make any calls.Two feelings surged inside me: grief so sharp in my throat that I could cry and a rage that manifested in my two-handed grip on the steering wheel, as if ready to rip it from the console.I cussed quietly, tried to keep it all down.How many times in Iraq had I felt palpable fear in my body but did everything I could to keep my face blank, my expression passive? After an IED.After the first mortar attack.

After tracers flew over our heads.

I was in the left lane and couldn’t get over.The sign was almost a half mile behind me.The cars kept pushing along.

All of these names, combined with the 203 specifically naming dead post–Civil War veterans, make the highway system an ever-expanding road museum to the growing list of American wars, of the war dead.

Nick’s sign, on a grassy stretch behind a medical supply and UPS warehouse, stands on the southeast corner of Interstate 270 in central Ohio.

I-270, officially declared the Jack Nicklaus Freeway, after the golf star and Columbus native, loops approximately 54 miles around the city, passing through suburbs such as Worthington, Dublin, and Grove City.

The sign that I saw stands near Grove City’s busy Broadway exit, facing northbound traffic.An identical one, about five miles up the freeway, near the West Broad Street exit, faces southbound traffic.Known as the “Outerbelt,” this mitten-shaped loop has its origins in President Dwight D.Eisenhower’s 1956 National Interstate and Defense Highways Act.

In post–World War II America, responding to increasing traffic accidents, a narrow and congested highway system, a growing population and surge of registered vehicles, and the desire to create jobs for returning service members, Eisenhower pledged to construct “41,000 miles of road by 1969.” In his February 22, 1955, message to Congress, Eisenhower explained how these highways would serve their role as “defense.” “In case of atomic attack on our key cities,” he said, “the road net must permit quick evacuation of target areas, mobilization of defense forces and maintenance of every essential economic function … the present system in critical areas would be the breeder of a deadly congestion within hours of an attack.” As I drove in the left lane—congested, sure, but with ample room to evacuate in case of atomic attack —I was angry because the roadscape was so commodified, banal: interstate numbers, speed limits, motels.The logos for Waffle House, Burger King , and Big Boy were on a wide blue sign reading Food–Exit 2 .And then, among it all, Nick’s name.

But what did I expect? Something holy and pure? Something bigger? Cars to slow and honk and flash their lights? I realized how most drivers saw Nick: another name, available for visual consumption or not, flattened—literally—on a steel sign.

N ick was laughing when I met him in the Fort Knox barracks bay where we lived for 15 weeks.We were the only two boys in the platoon from Ohio, and our lockers stood side by side.Both of us were 18, our high-school senior proms just a few weeks past.He was probably the only guy everyone liked immediately.On the first days of training, so many guys acted distant and hard.Not Nick.

He had us laughing from his drill-sergeant impressions, from the wry smile that showed his mouth of perfect teeth.He was a skateboarder, a fan of Flogging Molly, a trash talker of military authority.After a drill sergeant punished us with overhead arm claps until we couldn’t feel our shoulders, Nick walked into the barracks smiling sarcastically, joking, “That was fun!” Among so many guys raving about guns and how many push-ups they could do, Nick’s personality was refreshing.

I remember him outside of the barracks as all of us shined boots.It was the day after our weekend pass and Nick laughed as he explained what he and his girlfriend had done in a hot tub at the Elizabethtown Holiday Inn.I still see him sitting cross-legged in the grass, running a horsehair brush across his boots, the warm Kentucky evening closing in as we finished our last task of the day.

I’d go back to Ohio to drill with the National Guard.I do remember that a few of us wrote down our numbers and addresses in a small notebook that Nick had.

He promised, as he had many times during training, to show me around Columbus once we were both back home.We might’ve hugged or shaken hands—it’s all lost in my memory.I never heard from him again.

T o keep them from interfering visually with “directional guide signs,” memorial signs must, according to the Ohio Manual of Uniform Traffic Control Devices, “have a white legend and border on a brown background.” Also according to these guidelines, a memorial sign like Nick’s must be placed in an area where it won’t “compromise the safety or efficiency of traffic flow.” All of this is to ensure that the sign won’t confuse drivers trying to read, for instance, the blue or green signs noting a specific exit to Grove City or the nearest Sunoco.

A memorial sign asks for attention, but not too much attention.There have been many disputes over the meaning, purpose, benefits, and risks of memorial signs, as with the more ubiquitous roadside memorials honoring drivers killed on the roads, many of which are constructed by families.

In a 2019 study, drivers viewed videos of “road scenes with and without memorials” in order for researchers to examine, as they put it, “attentional allocation.” The memorial used in the study was a simple white cross.Although the memorials were not overly distracting, the researchers found, they were also not “safety neutral”: Some participants “reported quite strong negative emotional reactions.” Researchers stated that the memorials could be, depending on the location and the viewer, “distracting and/or distressing.”.

Sat Jan 1 , 2022
Sean Reynolds almost lost his life over a PlayStation. The 17-year-old high school senior had arranged to sell his gaming console through the app OfferUp, and agreed to meet the buyer — another teenager — near a public housing complex in Watts.He intended to save the cash he earned for […] 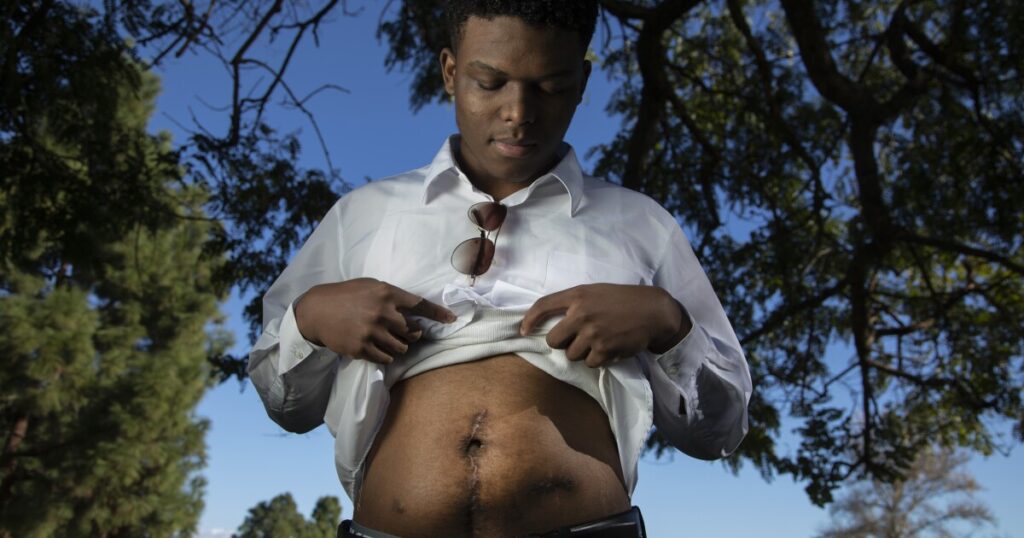