In early 2021, GameStop’s stock price suddenly and astronomically skyrocketed , peaking on Jan.28 at $483/share—close to 200 times as much as its April 2020 all-time low of $2.57/share.This explosion rocked Wall Street, became national news, and turned those behind its ascent into overnight financial-industry celebrities .GameStop: Rise of the Players is a celebration of those individuals and the paradigm-altering moves they made, infused with the sort of enthusiastic energy and humor that typified the online environment they inhabited.As far as recent history lessons go, it’s an entertainingly nostalgic primer—even if it falls short of casting its tale as the opening salvo in a supposed revolution .

GameStop: Rise of the Players (Jan.

28, in theaters) begins with the video game retailer itself, which at the start of the decade was viewed by many as a last-gen goliath destined to become Blockbuster 2.0—a derogatory moniker which implied that, with its business moving online, it was on a path to extinction.Director Jonah Tulis collects a wealth of YouTube prognosticators and article headlines proclaiming GameStop’s imminent demise, but not everyone saw things in such doom-and-gloom terms.DOMO Capital Management founder Justin Dopierala, for one, thought the market had a “huge misperception about GameStop,” and in May 2019, he wrote an article that made a case for the company’s continuing viability.

His belief in GameStop was soon echoed by other fledgling investors, including Dmitriy Kozin, Farris Husseini, Jenn Kruza, Rigoberto Alcaraz, Joe Fonicello, Jeff Tarzia (aka JT Smash) and Rod Alzmann, the last of whom made GameStop his first stock purchase ever in the mid-2000s.

Alzmann and Dopierala struck up a friendship based on their shared fondness for GameStop, bolstered not only by fond memories of frequenting the store themselves, but by their conviction about its underlying prospects.Their research indicated that the company’s future looked brighter than most forecasts suggested thanks to its strong customer base, its plans for brick-and-mortar reinvention, and the impending release of Sony’s PlayStation 5 and Microsoft’s Xbox Series X consoles.Before long, they developed a community of likeminded souls via Roaring Kitty, a YouTuber who hosted hours-long livestreams that regularly touted GameStop.Wearing a trademark red headband, and with a beer often in his hands, Roaring Kitty—who’d later be identified as Keith Gill—became the passionate master of ceremonies for this motley crew’s “support group” during a quarantine-lockdown pandemic that had closed off most other avenues for social interaction.

As Tarzia admits, they were “all drinking from the punchbowl,” but GameStop: Rise of the Players makes plain that they weren’t drunk; they had identified a unique set of circumstances that afforded an opportunity for enormous gain.With gaming interest on the rise thanks to COVID-19, these men and women came to believe that GameStop was being intentionally devalued by Wall Street hedge funds such as Melvin Capital and Citron Research, which were engaged in massive short selling, a practice in which investors strategically borrow and sell stocks right before a company’s value plummets.At the same time, Chewy.com founder Ryan Cohen began purchasing increased shares of GameStop, all with an eye toward potentially transforming the business.

Together, this all increased online excitement for the possibility of a short squeeze—namely, a whirlwind increase in stock purchases that would drive the company’s stock price up and cost short sellers a fortune.

Whereas Dopierala, Alzmann and their compatriots had initially been laughed out of—and banned from—the popular r/wallstreetbets subreddit, that venue eventually became the epicenter of mounting eagerness for a short squeeze, fueled by memes rooted in this virtual subculture’s goofy terminology (“diamond hands” means you hold onto stocks; “tendies” is short for profits; “YOLO” is risking everything on a big gamble).GameStop: Rise of the Players embraces Reddit, YouTube and Twitter’s memeification of GameStop fervor, both by presenting numerous relevant examples of the form, and by employing a rapid-fire editorial structure that conveys the infectious electricity and snowballing momentum of the moment; 16-bit-style graphics and iPhone videos similarly contribute to an aesthetic in tune with the action’s go-for-broke spirit.

“Whereas Dopierala, Alzmann and their compatriots had initially been laughed out of—and banned from—the popular r/wallstreetbets subreddit, that venue eventually became the epicenter of mounting eagerness for a short squeeze…” Further goading this phenomenon was Reddit user DeepFuckingValue, who had put his entire life savings into GameStop stock.When things finally exploded in late January 2021, DeepFuckingValue—and those who’d followed his lead—made a mint, thanks to a stock price that peaked just shy of $500/share.As it turns out, DeepFuckingValue was Keith Gill, aka Roaring Kitty, who rode off into the sunset with millions in his pockets shortly after testifying before Congress about the meltdown wrought by GameStop’s unheard-of rebound.That hearing was sparked by online trading platform Robinhood’s Jan.28, 2021, decision to halt GameStop trading, thus crashing its valuation and inciting numerous class-action lawsuits alleging that Robinhood had worked in concert with industry titan Citadel to protect hedge funds’ positions.Accusations of (and conspiracy theories about) market manipulation ensued, although GameStop: Rise of the Players renders no conclusive verdict on the subject; some believe such nefariousness took place, while others buy Robinhood’s story that its actions were driven by a lack of collateral.

Even so, Tulis’ documentary dubs Dopierala, Alzmann and the rest “heroes” and takes a rosy-eyed view of their David-vs.-Goliath campaign, portraying hedge funds—here represented by Citron Research’s Andrew Left, who sits for a new interview—as villains who treat Wall Street as a personal playground.

GameStop: Rise of the Players depicts its saga as an example of everyday Americans seizing control of the financial markets from the greedy 1 percent who claim it for themselves.Yet the portrait it paints is of a brief, fleeting “perfect storm” that allowed amateurs—some serious about GameStop, many more simply interested in creating temporary market havoc for their own gain and at the expense of wealthy power players—to upend the status quo.It may have been a heady revolt, but the film never convincingly contends that it was a catalyst for lasting upheaval—a notion borne out by the fact that the game remains the same as before, and that, as of this writing, GameStop’s stock is currently at its lowest point since February 2021..

With a boom on the horizon, are old video games the new vinyl? 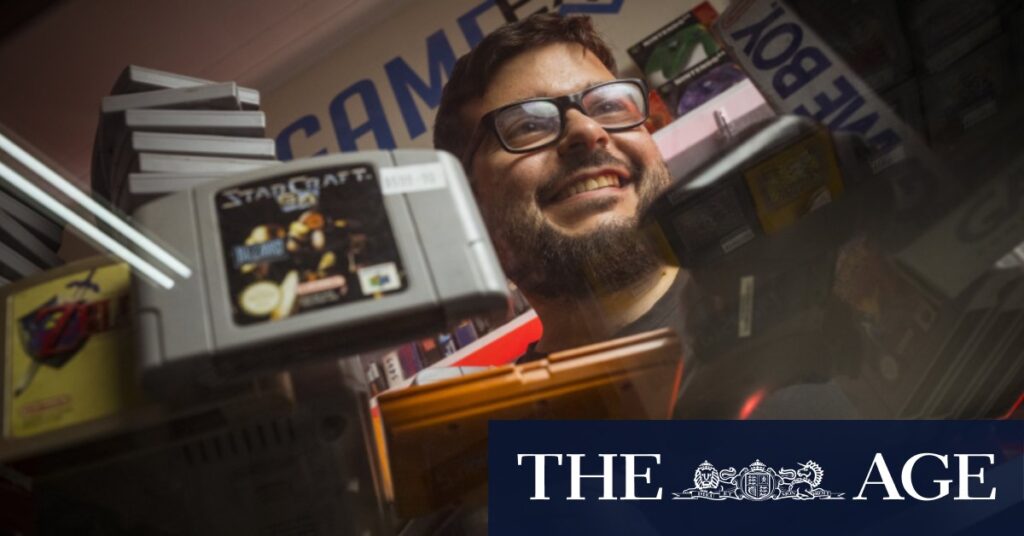