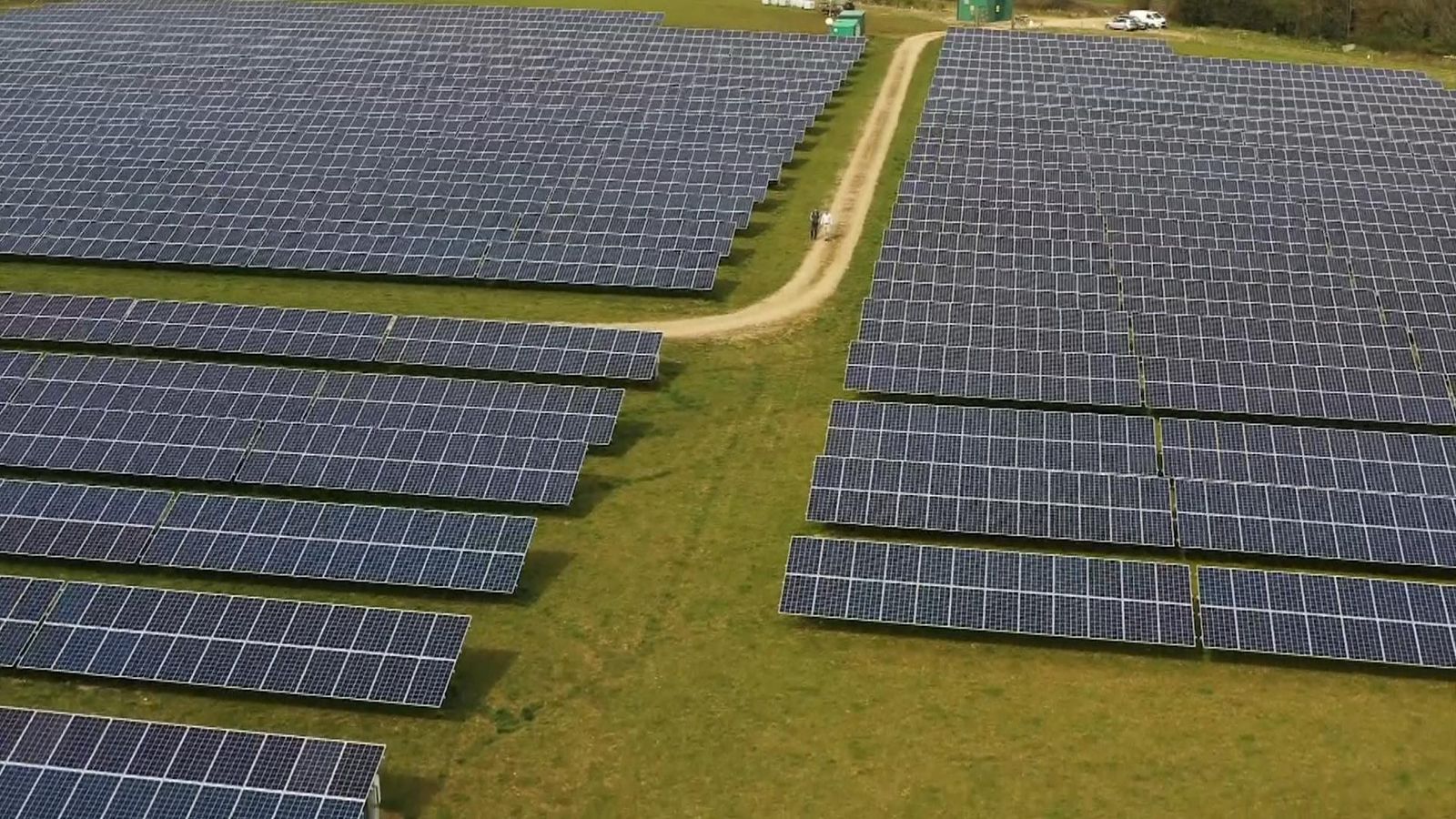 Solar power could cut bills and replace the need for Russian gas far more quickly than other sources of energy, the industry has told Sky News.

But a new wave of vast solar farms is leading to opposition from rural communities who fear “industrialisation of the countryside”.

Solar Energy UK said there were 7GW of ‘shovel-ready’ solar installations that have planning permission and authorisation to connect to the electricity grid.

That is far more energy than even the Hinkley Point C nuclear reactor, which won’t be completed until at least 2026, a decade after it was given the go-ahead.

Advertisement “We’ve got about 7GW of solar that we can feasibly get built and start exporting to the grid in the next two years.It’s a really quick turnaround for basically three times the reward.”

Subscribe to ClimateCast on Spotify , Apple Podcasts , or Spreaker

Ukraine war: Thousands of ordinary Russians are going to battle in the information war – what they’re saying

The UK has 14GW of installed solar capacity, up from around 1.5GW a decade ago.

Its rapid growth has been driven by plummeting costs – down 85% over the same period.

New solar farms are generating electricity for less than £50 for 1 megawatt hour (MWh), enough to supply 2,000 homes for one hour.

The agreed price for electricity from the Hinkley reactor was £92 per MWh, rising with inflation.

And the cost of gas in recent weeks has been around £225 per MWh.

Economies of scale are increasing the size of proposed new solar farms.

Currently the largest is Shotwick Solar Park in North Wales, which has a capacity of 72 MW.

But Sunnica is applying for permission to build a 500MW ‘energy farm’ in East Cambridgeshire and West Suffolk.

It would have more than one million panels, as well as battery storage, across an area equivalent to 2,500 football pitches.

Nick Wright is part of the ‘Say No to Sunnica’ campaign group and a local farmer.

Image: Nick Wright is part of the ‘Say No to Sunnica’ campaign group and a local farmer He says it is fertile soil that is good for a range of food crops.

“A scheme of this size is industrialisation of the countryside,” he said.

“We need food security as well and this is the incorrect place for solar.In the UK we have 600,000 acres of south-facing industrial roof-space which is unused, we have brownfield sites and we have arable land that is less versatile that this.

The expansion of large-scale solar has been opposed by some Tory MPs, including Matt Hancock, the former health secretary.

Similar opposition to onshore wind has left it in the doldrums.

And the government’s recent energy strategy shied away from an explicit target for solar energy.

Instead there is an ambition for increasing capacity by “up to” five times by 2035, with a pledge to consult on changes to the planning rules to accelerate the roll out.

Image: Oxford PV will shortly start production of panels containing a mineral called perovskite But emerging technology could allow solar panels to harness the same amount of the sun’s energy in a smaller area.

The first generation is 20% more efficient than current silicone-based panels.

But the spin-off from Oxford University is confident they can raise that to 100%.

It could make smaller installations on rooftops of schools, factories and office buildings highly cost effective.

Laura Miranda, the company’s head of materials research, said the discovery was a gamechanger.

“This is the biggest breakthrough in solar technology in decades,” she told Sky News.

“We know there are concerns about land use.

“Having more energy and more power coming from the same area means that we can reduce the areas where we put those panels for the same output.”.

Sun Apr 17 , 2022
A single New Jersey man has uncovered a medical mystery apparently linking 100 people diagnosed with rare cancers to a Woodbridge high school.In 1999, when he was just 27, Al Lupiano was diagnosed with a “very rare” and abnormally large brain tumor for someone his age called Acoustic Neuroma (AN).Last […]