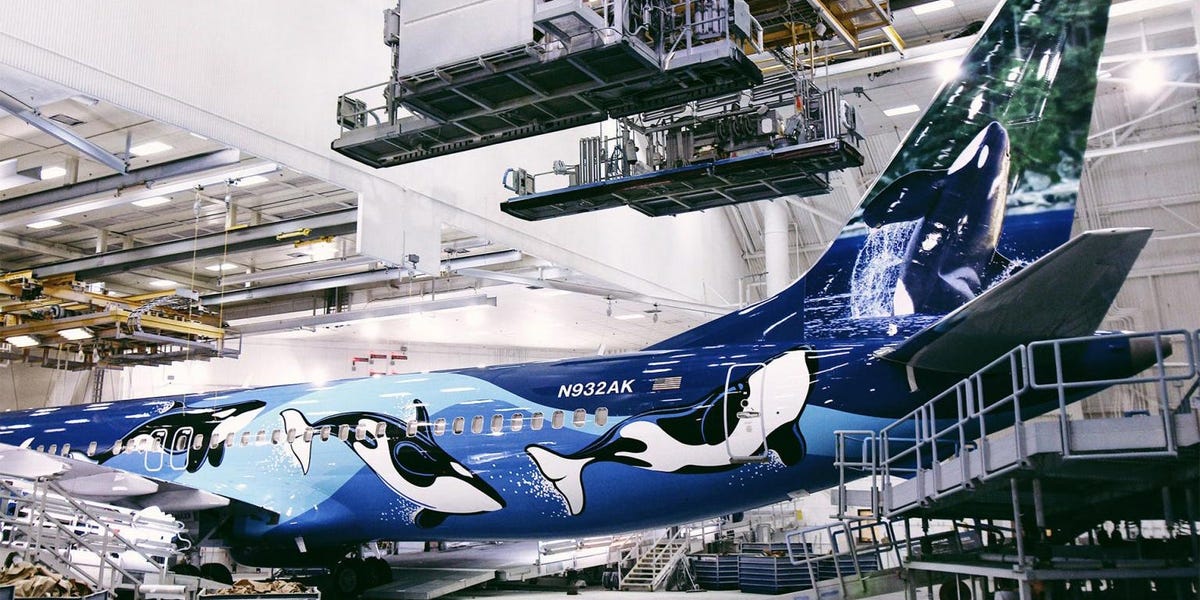 Alaska Airlines’ new orca livery.Alaska Airlines Alaska is the first major US airline to offer a ‘flight pass’ subscription for discounted travel between 16 cities for as low as $49 a month

The Boeing 737 MAX 9 jet features the powerful orca whale, which has been a symbol of the West Coast for thousands of years and a prominent figure in many native cultures and belief systems.Orca (Southern Resident Killer Whales) in the Pacific Northwest.Monika Wieland Shields/Shutterstock Source: Georgia Strait Alliance

Alaska’s new livery was created by graphic design consultancy Teague, which has come up with hundreds of paint jobs for airlines across the world, like Air Tahiti Nui’s Boeing 787 Dreamliner.

While this is not Teague’s first rodeo, the project introduced an all-new technology that the company had never used before — “direct-to-shape” 3D inkjet printing.Alaska Airlines livery in the paint shop.Alaska Airlines Source: Teague , Alaska Airlines

In 2019, American planemaker Boeing came up with the technology to more-efficiently paint aircraft tails, similar to Airbus’ “direct printing” method.It is backed by 120 patents and can reduce the labor time of painting planes from days to just hours.

According to Teague, when an aircraft is painted, the process involves workers manually spraying each individual color from separate paint guns.Painting an American Airlines A321neo.American Airlines/Airbus Source: Teague

With Alaska having close ties to Washington-based Boeing, the planemaker asked the airline if it would be the first to try the one-of-a-kind technology.Alaska agreed and turned to Teague for graphics.

“Livery design is a specialized technical skill that we’ve honed over decades,” Katie Ryan, Teague’s livery and communications design manager, told Insider.”Collaborating with pioneering partners like Boeing and Alaska Airlines to pilot new technologies that stretch the boundaries of our craft is the type of challenge we look forward to.” Teague’s Air Tahiti Nui livery project.Teague Source: Teague

Eventually, Alaska and the team decided the orca would be a “perfect fit” for the new MAX jet.Designing Alaska Airlines new orca livery.Teague Source: Teague

The company came up with several livery options involving the killer whale, including one with the northern lights… Northern lights and orca concept.

…a third with several orcas in an ocean scene… Orcas in the ocean.Teague Source: Teague

Because the new inkjet technology would be used on the plane’s 24-foot tall tail, the company decided it would be best to print an actual photograph to “showcase the color blending capabilities” of the printer.Sketching the orca for the Alaska livery.Teague Source: Teague

After many reviews, Teague chose Jane Cogan’s photo of a vertically posed orca.

Cogan is a retired Boeing engineer who volunteers with the Center for Whale Research on San Juan Island in northwest Washington.Alaska Airlines orca livery.

To develop the image, the printer was simply mounted and turned on.The orca was revealed “line-by-line” and, after 12 hours, both sides of the tail were complete.Completed tail with crew.Teague Source: Teague

According to the company, the half-day it took for the inkjet printer to work its magic was nothing compared to the days and significant manpower the job typically requires.Painting an American Airlines A321neo livery.The process took eight days and required 200 rolls of masking tape, 125 gallons of paint, and 16 different colors.

While the inkjet printer is game-changing technology, it can only be used on an aircraft’s tail, so the fuselage was hand-painted by Boeing’s paint crew.Alaska Airlines livery in the paint shop.Alaska Airlines Source: Teague

The final livery was chosen from three designs, each created by a different Teague artist.

It features an ocean scene with shades of green and blue, and orcas swimming through the water and popping through the surface on the tail.Designers reviewing livery concepts.Teague Source: Teague

To prepare the fuselage for painting, Teague’s Catia team stepped in to figure out how the design would wrap around the plane’s lights, doors, windows, and wings.Once everything was precisely fitted, the files were sent to Boeing to create stencils for the painters to follow.

“This over-whale-ming aircraft honors the beautiful shores we call home, the Southern Resident orca pods that live around our hubs, and our commitment to keeping rivers and oceans healthy for the long term,” the airline said on Twitter.

According to the company, it has started a green initiative to have net-zero carbon emissions by 2040.It plans to do this by renewing its fleet, focusing on operational efficiency, using sustainable aviation fuel, and investing in electric and carbon offsetting technologies.Alaska Airlines net-zero goal.Alaska Airlines Source: Alaska Airlines

Alaska is not the only carrier pulling back the curtain on its aircraft design process.Northern Pacific Airways Boeing 757 aircraft.

Northwest Pacific Airways, a low-cost startup that plans to connect the US and Asia via Anchorage, unveiled its first Boeing 757 in January, showcasing its distinct livery.

“I always wanted to do something that had taste, because people want to see something beautiful and eye-catching, and I also wanted it to be identifiable in the sky,” Huot told Insider.

This $300,000 electric speedboat glides above the water at over 30 miles per hour — take a look

Mon Feb 28 , 2022
Swedish electric boat builder Candela will deliver its new hydrofoil craft to customers this year.The technology allows the boat to glide above the surface of the water.Candela says that the use of foils allows the boat to use less energy and have a greater range.Read the original article on Business […]