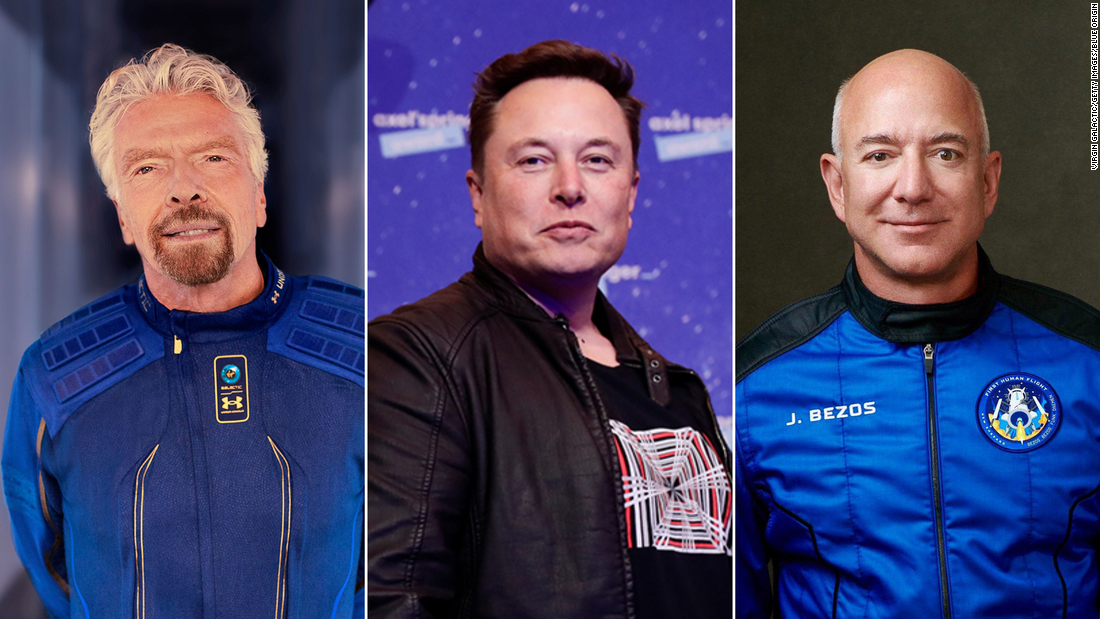 New York (CNN Business) When future generations write about the history of space travel, 2021 may well get its own chapter.”The year of the billionaires,” it might be called.

Jeff Bezos and Richard Branson each took supersonic joy rides to the edge of space, finally bringing their competing private-sector spacecraft into operation after around two decades of promises.Celebrities such as 90-year-old “Star Trek” actor William Shatner and “Good Morning America” co-host Michael Strahan followed soon after.Another billionaire self-funded a historic, three-day mission aboard a SpaceX orbital capsule that flew higher than any human has traveled in decades.And all that promises to just be the beginning.The trio of space billionaires — Branson, Bezos and Elon Musk — have their eyes set squarely on the future.

Over the past year, their visions continued to bump up against one another, stirring up plenty of controversy and one-upmanship.Here’s a look back at some of the most memorable moments the commercial space industry had to offer in the last year.Read More Branson v.Bezos Branson’s and Bezos’ space companies have for years been working to develop spacecraft capable of taking paying customers on brief, supersonic trips to the edge of space, promising to usher in an age in which booking a flight to view the Earth from space is as easy as jetting across the Atlantic.

(Musk’s SpaceX, it should be noted, is not in the suborbital tourism game.Its rockets and spacecraft take much longer and more dangerous treks into Earth’s orbit.) We’re not quite there yet.

But both billionaires pledged to kick off their respective suborbital space tourism businesses by taking the rides themselves, both as a show of their confidence in their vehicles’ safety and some strategic PR.VAN HORN, TEXAS – JULY 20: Jeff Bezos speaks about his flight on Blue Origin’s New Shepard into space during a press conference on July 20, 2021 in Van Horn, Texas.

Mr.Bezos and the crew that flew with him were the first human spaceflight for the company.(Photo by Joe Raedle/Getty Images) Bezos, founder of the rocket firm Blue Origin, planned to become the first person ever to travel to space aboard a spacecraft his own company developed, setting his sights on a July 20 launch.(Blue Origin even auctioned off a ticket to ride alongside him for a whopping $28 million , though that auction winner did not ultimately fly.) Then, Branson swooped in, announcing days later that he planned to hop on the next flight of the rocket-powered space plane developed by his company, Virgin Galactic , on July 11 — nine days before Bezos’ mission.

That set off an immediate wave of speculation that — although Branson has repeatedly said in interviews he doesn’t view his competition with Bezos as a “race” — there was a bitter rivalry brewing behind the scenes.Richard Branson takes off on July 11, 2021 from a base in New Mexico aboard a Virgin Galactic vessel bound for the edge of space.

Both billionaires’ flights ended without apparent issue, with the men emerging from their respective spacecraft outfitted in custom flight suits and beaming for the cameras.

Adding to the spectacle, both flights also carried some notable crewmates for the billionaires.Bezos was joined by 82-year-old Wally Funk , who famously trained for NASA’s Mercury program in 1961 but never went to space, and then-18-year-old Oliver Daemen , the son of a wealthy businessman.The pair became the oldest and youngest people, respectively, ever to travel to space.

(Funk’s record was bested shortly after by the 90-year-old William Shatner .) Branson took with him Virgin Galactic executive Sirisha Bandla, who became only the second Indian-born woman to fly to space and back.Shaping up suborbital space Bezos’ successful July launch catapulted the company into a busy rest of the year spent flying some high-profile figures as “honorary guests” — meaning they didn’t have to pay for tickets.Shatner took his suborbital excursion in October , a feat widely celebrated by “Star Trek” fans that was followed by an Amazon video special on the flight.Michael Strahan and Laura Shepard Churchley, the daughter of famed astronaut Alan Shepard, flew in December .

A report from the New Yorker revealed that warning lights had gone off in the cockpit during Branson’s flight and the space plane had traveled outside its designated airspace for 41 seconds.The Federal Aviation Administration grounded all flights pending a review, which concluded in September and gave Virgin Galactic the all-clear.

Still, the company is delaying the start of commercial services, citing unrelated technology upgrades .Blue Origin, meanwhile, has faced its own controversies, though none that have indicated specific safety issues with its rocket or spacecraft.Rather, a group of 21 current and former employees co-signed a letter alleging the company operates a toxic work environment where “professional dissent” is “actively stifled.” Blue Origin responded to the claims by saying it has “no tolerance for discrimination or harassment of any kind.” Inspiration4 flies higher Though Musk does not have any apparent plans to join one of SpaceX’s missions, his company continued to prove its technology chops.It drastically expanded its space-based internet service, Starlink, growing the constellation to include roughly 2,000 satellites.

Its Dragon spacecraft also launched and returned astronauts to and from the International Space Station this year, and it topped the billionaire space tourism competition with a historic space tourism mission of its own.SpaceX’s Inspiration4 mission, self-funded by billionaire payments platform CEO Jared Isaacman, sent Isaacman and three other people, none of whom were professional astronauts, on a three-day trip to orbit that traveled even higher than the International Space Station — higher than any human has traveled this century.The passengers floated around the capsule, played songs, created works of art and kept in touch with ground control as their 13-foot-wide capsule whisked around the planet once about every 90 minutes, traveling at more than 17,500 miles per hour.The SpaceX Falcon 9 rocket carrying the Inspiration4 crew launches from Pad 39A at NASA’s Kennedy Space Center in Cape Canaveral, Florida on September 15, 2021.- The Inspiration4 mission, the first to send an all-civilian crew to orbit, will venture deeper into space than the International Space Station.(Photo by Chandan KHANNA / AFP) (Photo by CHANDAN KHANNA/AFP via Getty Images) The mission was intended to raise money for St.

Jude Children’s Hospital, a cause to which Isaacman donated $125 million and a public fundraiser fetched more than $118 million.Musk promised to donate $50 million .The whole thing went off ( almost ) without a hitch.Still, all the billionaires-in-space news generated plenty of backlash , including from high-profile figures such as the United Nations secretary general and Prince William .A “disease is spreading in our world today: a malady of mistrust,” UN Secretary-General António Guterres said in September, adding that includes “billionaires joyriding to space while millions go hungry on earth.” Bezos v.Musk Playing out in the background of all the space tourism hype was a tense battle pitting the two wealthiest people on the planet against each other .Bezos and Musk each want their own companies to be at the center of NASA’s plans to return astronauts to the moon this decade.

But after initially planning to bring on more than one contractor to build the lunar lander for the job, NASA later said it only had enough money for one — and it went with Musk’s SpaceX.It awarded $2.9 billion to the company .Blue Origin fought that decision all year, saying NASA unfairly favored SpaceX.Meanwhile, the PR offensives and twitter battles began.Elon Musk and Jeff Bezos are arguing over the moon already.Here’s what it all means But a federal judge delivered a major blow to Blue Origin in November by ruling in favor of NASA and SpaceX.That put the future of the Bezos-owned company’s plans to build a lunar lander into question.

The ordeal highlighted how important government contracts are to the viability of the commercial space industry.Though these companies are private, their revenue streams still rely heavily on taxpayer money.And the battle over NASA’s moon lander contract queued up what are sure to be more high-profile battles and an interesting few years ahead, as NASA and its contractors map out a path back to the lunar surface for the first time in half a century..

Mon Jan 3 , 2022
Apple wants you to know that buying a $400 smartwatch could be a matter of life-and-death — and it’s brilliantly, gruesomely captured that feeling in a new TV ad. Titled “911,” the one-minute ad spot doesn’t show any of the gory details — you simply hear three phone conversations between […] 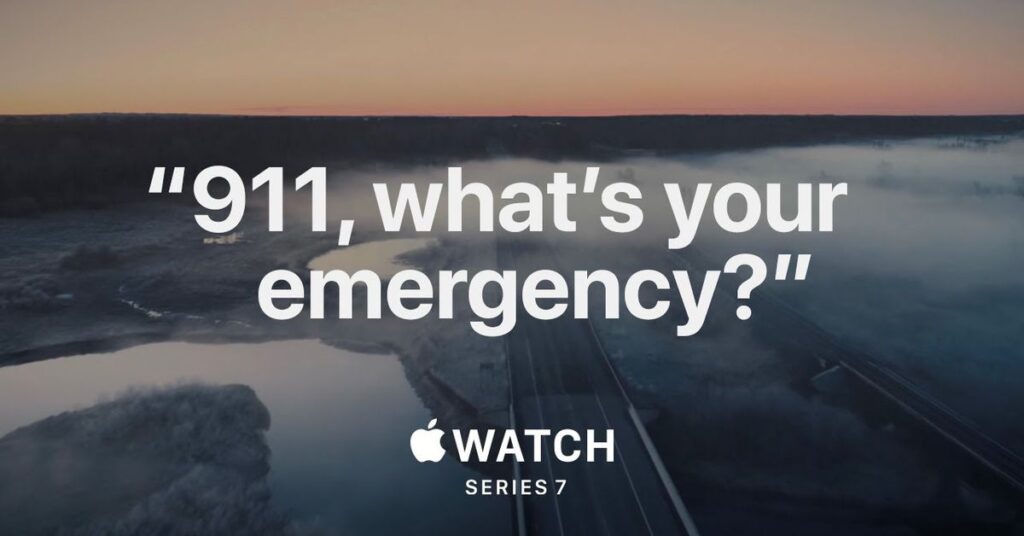