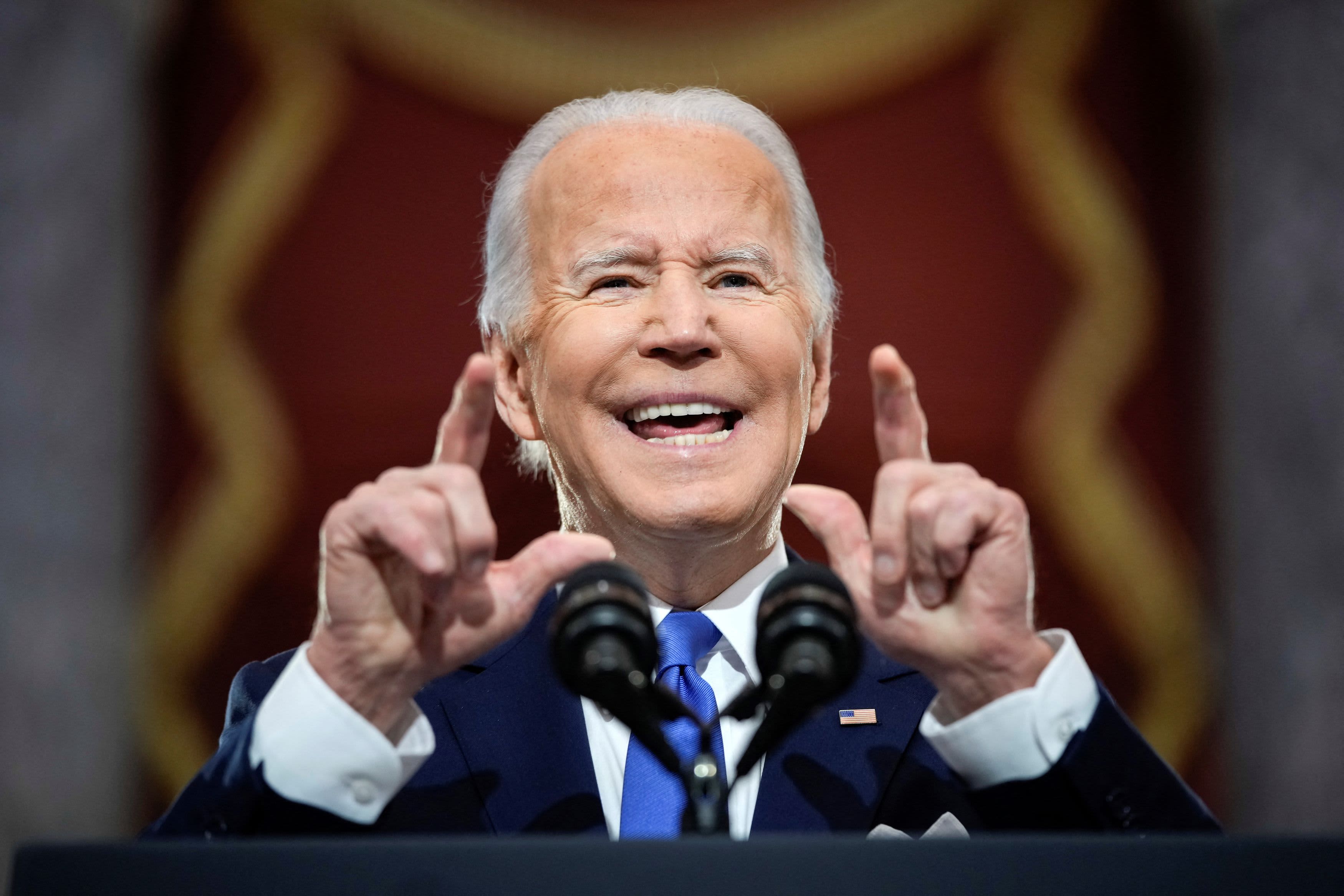 To say that the U.S.Labor Department’s jobs reports are important would be to undersell what many observers consider something of a critical economic barometer.That data, which includes the official measure of national unemployment and monthly job creation, shapes economic forecasts.But it also serves as a potent political measure, an instant report card on the success or failure of a U.S.president’s economic plan.It can sway consumer attitudes in the short term and influence voters in election years.An assumption that the government provides accurate numbers underpins the emphasis on the monthly update.But now the lingering Covid-19 pandemic makes the job of collecting reliable numbers more difficult — and less reflective of the final count after revisions than in pre-pandemic times.

That means President Biden, who will mark a year in office Jan.20, paid a political price for what were seen as “missed expectations” that appear to have helped to sour voters on his handling of the economy as the Democrats try to hold control of Congress in November’s midterm elections.During the pandemic years of 2020 and 2021, Labor Department surveyors have had a difficult time counting job creation.Biden and most Americans have seen initial monthly figures in those years that often understate the true job growth.The average monthly revision to the Labor Department’s jobs report has topped 100,000 so far for 2021.The figure could change, as the government has not published a final update for November and December revisions.If that figure holds, it would mark the most extreme gap in nonfarm payrolls estimates in at least 40 years, even when adjusted for the growth of the labor force, a CNBC analysis of Bureau of Labor Statistics data found.The effect of those revisions over time appears even more profound.

If the economy added as many jobs as first reported between January and October in 2021, the U.S.would have tallied 4.9 million jobs over that period.After revisions, though, data show the U.S.actually added 6 million jobs.CNBC excluded November and December from the calculation because the BLS has not published its final revisions for those months.

The Labor Department’s initially projected job gains of 249,000 and 199,000, respectively, for those months.That would make for a 2021 total of more than 6.4 million jobs.The revisions have looked even more stark in specific months of 2021.

When the Labor Department first reported employment figures for last January, its month-over-month net total was a mere 49,000 jobs.After revisions, the government said January’s gain came to 233,000 jobs, more than quadruple the original reading.Something similar happened the next month.The BLS first said that U.S.employers added 379,000 jobs in February 2021.Weeks later, the BLS revised that number up to 536,000, meaning that most people who read the initial jobs report saw a figure 157,000 jobs below the final total.

People often mistakenly believe the preliminary data is “wrong” because the government later revises it, Tyler Downing, a senior economist at the Labor Department’s Division of Current Employment Statistics, said in an email.”No, we got it right, based on what the sample told us,” he wrote.

“At each publication, the estimates are accurate based on the sample that is received and calculation of seasonal adjustment factors.” Downing added that the BLS in 2021 saw one of its lowest data collection rates for its first preliminary release, or the report released on the first Friday of every month.It is unclear exactly what has made data collection more difficult during the economic recovery from the pandemic this year.The Labor Department based its 2021 jobs reports off a smaller pool of data than usual, meaning the first estimate lacked its usual precision.The annual average collection rate came in at 69.8% of the total number of businesses sampled.The last time the rate was that low was in 2008.By the third and final release, the Division of Current Employment Statistics usually has a collection rate above 90%.”Collection rates for first preliminary estimates have risen from an average 65.0 percent in 2003 to 73.5 percent in 2020,” Downing wrote.”There will, however, always be a lag with some businesses, because they simply do not have their payrolls completely processed.” The understated reports and subsequent revisions wouldn’t be as problematic in Washington if Wall Street did not focus so intently on economists’ forecasts prior to the jobs report.

Those “missed expectations” headlines during pandemic months could hurt Biden and his party at the polls this year.Dozens of news media outlets, including CNBC, cite surveys of economists in stories published ahead of the Labor Department’s official release.

Doing so helps reporters set readers’ expectations for job growth and gives them insight into what Wall Street expects since many traders buy and sell based on their outlook for the broader U.S.economy.

But the pandemic has also undermined the models economists use to forecast payrolls growth.Government and private-sector economists have for years adjusted the jobs numbers based on the season — and even in the best of times forecasters have a difficult time predicting human behavior.But adding a pandemic to the mix has upended even the most modest models of human behaviors, from travel and indoor dining patterns to adherence to public health advisories.Wall Street’s economics models — like those at the Labor Department — have become less accurate as a result.

But the number after revisions came in at 233,000.Read more of CNBC’s politics coverage: Ahead of the February report, those same economists projected a gain of 210,000 jobs.Their estimate fell 326,000 short of the final print of 536,000.The average monthly projection from Dow Jones’ group of economists fell 254,000 jobs per month short of the final revised figures in 2021, according to a CNBC analysis of the numbers.

The gap between estimates and final numbers has been much narrower in recent years.For instance, in 2017, the average difference between economist expectations for monthly job growth and the final revised figures was just 30,000 jobs, about just 11% of last year’s total.

Of the 12 preliminary Labor Department jobs report in 2021, seven missed Dow Jones expectations.The combination of noisier initial government data and less accurate projections from economists has contributed to a tough reality for the Biden administration.The White House has tended to face harsh headlines on days the monthly jobs reports come out for “missed expectations.” Then, when the large revisions come weeks later, Biden doesn’t reap much benefit in voter perception.Some 58% of voters say they disapprove of how Biden is handling the U.S.job market, according to a CNBC/Change Research poll published earlier this month.That’s even worse than their views on the job market overall: 52% of those surveyed said they see the current state of the U.S.job market as either “poor” or “not so good.” What’s more, 60% of the survey’s 1,895 respondents said they disapprove of Biden’s handling of the economy, a six-percentage-point decline in approval from September.Many political analysts say the president’s flagging polling numbers suggest Democrats could face a tough election cycle in 2022.

Some have pointed to Republican Glenn Youngkin’s victory over Democrat Terry McAuliffe in Virginia’s November gubernatorial race as evidence that the GOP could flip control of Congress this year.The GOP victory is notable because Biden won Virginia by 10 percentage points in 2020.History already suggests a rough year for Biden, as the president’s party typically loses seats in the first midterm.Poor approval of his handling of the job market — combined with inflation running at its highest levels in decades — likely will not help.The Labor Department’s first look at the U.S.jobs market for December 2021 showed the national unemployment rate under 4% and 199,000 jobs added last month.While any recent number needs to be taken in the context of an economic recovery, when companies add jobs more quickly, a look at pre-Covid trends would suggest December was a strong month for jobs.The average monthly nonfarm payrolls gain in 2017 was 181,000.

That number rose to 193,000 in 2018 and retreated to 168,000 in 2019.A majority of economists say an unemployment rate under 4% is strong evidence that the U.S.labor market has neared full employment.But economics are not politics.

Republicans seized upon the disparity between the number of jobs added versus expectations after the release on Friday.”The latest jobs report was not only a December disappointment, it was Biden’s worst jobs report yet,” Sen.

Ted Cruz, R-Texas, wrote in a Twitter post on Friday.The House Republican conference explicitly referenced news coverage about the report falling short of Wall Street expectations.”President Biden just had the worst jobs report of his presidency in December.American workers can’t afford ‘another big miss’ from this administration,” read a post from the House Republican Twitter account.Democrats hold razor-thin majorities in both chambers of Congress.The Senate is split 50-50 between the parties, while Democrats hold a narrow 221-212 advantage in the House of Representatives.

As Democrats face the threat of losing control of Congress — and their ability to pass Biden’s economic agenda — the White House has tried to counter the souring opinion on the job market and economy.

Council of Economic Advisers Chair Cecilia Rouse has made a habit of pointing out the larger-than-average fluctuations in the jobs reports.She published a blog post earlier in January after the seemingly underwhelming December jobs report that underscored the point.”Jobs numbers are generally revised twice before they are considered relatively ‘final,'” Rouse wrote.”As the administration stresses every month, the monthly employment and unemployment figures can be volatile, and payroll employment estimates can be subject to substantial revision.” — CNBC’s Nate Rattner contributed to this report..

Costco is opening up to 28 stores this year

Thu Jan 13 , 2022
Costco plans to open as many as 28 stores in 2022, per a Wall Street Journal report.The warehouse chain is planning to invest $4 billion into its business in fiscal 2022.Known for its deals and discounts on bulk goods, the company has flourished in the pandemic.Get a daily selection of […]