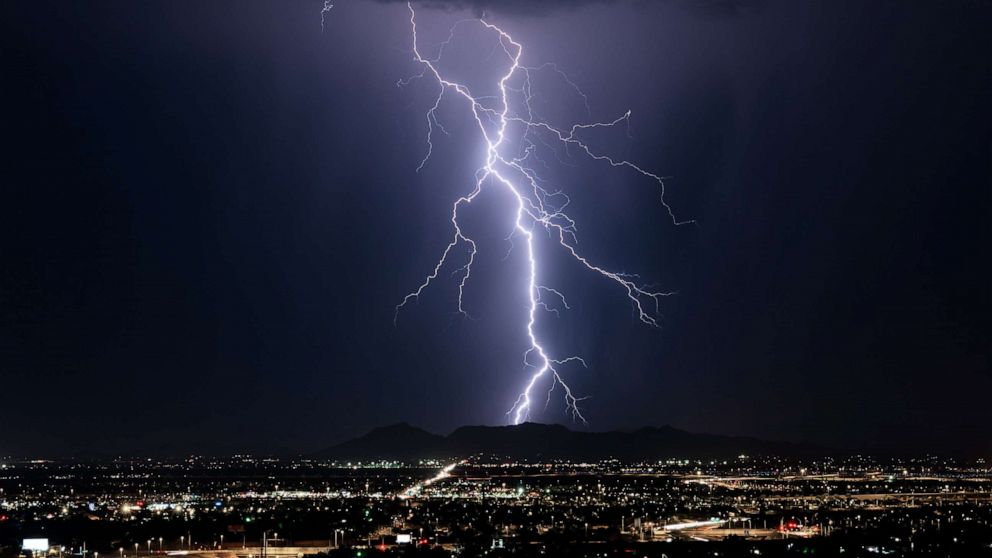 Why was there less lightning during COVID lockdowns? The decrease coincided with a drop in humans emitting aerosols.

Catch up on the developing stories making headlines.STOCK IMAGE/Getty Images This is an Inside Science story.

In the spring of 2020, as the coronavirus spread and many places in the world imposed lockdowns, humans used less energy and many spent more time in their homes.As a result, air and water became cleaner, fewer animals were killed by vehicles and the world grew quieter.

Now, researchers think they have found another impact of the lockdowns — less lightning in the spring of 2020.

Scientists believe that tiny particles in the atmosphere called aerosols contribute to lightning, and human activities such as burning fossil fuels release aerosols.A study published last year showed that since humans released fewer aerosols during lockdowns, the concentration of aerosols in the atmosphere decreased.Last month, researchers at the American Geophysical Union meeting in New Orleans presented findings showing that this drop in atmospheric aerosols coincided with a drop in lightning.

STOCK IMAGE/Getty Images In this undated file photo, lightning strikes near Phoenix.Earle Williams, a physical meteorologist at the Massachusetts Institute of Technology who presented the research, said the team used three different methods to measure lightning.

“All results showed the same trend — that is, a diminished lightning activity associated with a diminished aerosol concentration,” he said.

Some aerosols in the atmosphere can collect water vapor, forming cloud droplets.

Williams said that when there are more aerosols, the water vapor in the cloud is distributed among a greater number of droplets, so the droplets are smaller and less likely to coalesce into larger rain droplets.These smaller droplets stay in the cloud, aiding the formation of small hail called graupel and even smaller ice crystals.Collisions between the graupel and crystals yield negatively charged graupel in the middle to lower part of the cloud and positively charged crystals at the top of the cloud.Scientists think this big difference in charge between the two parts of the cloud causes lightning.

MORE: Human-induced climate change may affect 85% of the global population, researchers say But when there’s less pollution and clouds form larger and warmer rain droplets, “you starve the cloud of the ice particles that it needs for charge separation, and you have reduced lightning activity,” said Williams.

When countries locked down at the start of the pandemic, humans emitted fewer aerosols into the atmosphere.Production at power plants that burn fossil fuels dropped.People also drove less.”Automobile traffic has a big impact on surface aerosol production,” said Williams.

STOCK IMAGE/Getty Images In this undated file photo, lightning strikes in a field in Haswell, England.This reduction in pollution is likely a major reason why Williams and his colleagues observed a drop in lightning activity, which includes lightning that strikes the ground, as well as lightning within clouds and lightning between clouds and the air.

One of the researchers’ methods, which captured many intracloud flashes (the most common type of lightning), measured 19% fewer flashes in March 2020 to May 2020 compared to the average number of lightning flashes across the same three-month period in 2018, 2019 and 2021.”Nineteen percent is a pretty large reduction,” said Williams.

Another method looked at global electromagnetic resonances called Schumann resonances.Williams said their intensities are thought to be proportional to the number of lightning flashes occurring, and these measurements also indicated that there was less lightning during 2020.

MORE: Young people experiencing ‘widespread’ psychological distress over government handling of looming climate crisis, researchers say In addition, the results showed that places with more dramatic reductions in atmospheric aerosols tended to also have the greatest reductions in lightning.Southeast Asia, Europe and most of Africa saw some of the greatest reductions both in atmospheric aerosols and lightning, while the Americas had less dramatic changes.

One reason researchers want to understand lightning is because lightning affects the atmosphere.Williams said that lightning strikes produce nitrogen oxides, which contribute to air pollution.”That atmospheric chemistry is definitely influenced by lightning activity,” he said

Inside Science is an editorially independent nonprofit print, electronic and video journalism news service owned and operated by the American Institute of Physics.

Tue Jan 11 , 2022
ROME — In a sweeping speech on the pandemic and other global issues, Pope Francis on Monday called for widespread vaccination in all countries and suggested the global coronavirus response was being complicated by “baseless information or poorly documented facts.” “Vaccines are not a magical means of healing,” Francis said, […]