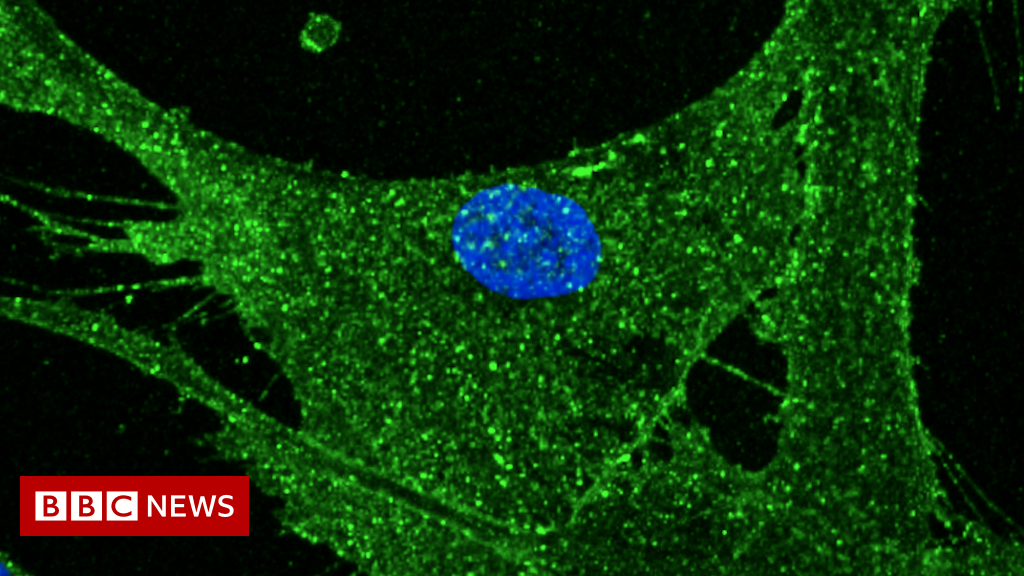 Copy link About sharing Image source, Fátima Santos Image caption, This magnified skin cell is from a 53-year old woman but it looks and behaves like one that is 30 years younger Researchers have rejuvenated a 53-year-old women’s skin cells so they are the equivalent of a 23-year-old’s.

The scientists in Cambridge believe that they can do the same thing with other tissues in the body.

The eventual aim is to develop treatments for age-related diseases such as diabetes, heart disease and neurological disorders.

The technology is built on the techniques used to create Dolly the cloned sheep more than 25 years ago.

The head of the team, Prof Wolf Reik, of the Babraham Institute in Cambridge, told BBC News that he hoped that the technique could eventually be used to keep people healthier for longer as they grow older.

“We have been dreaming about this kind of thing.Many common diseases get worse with age and to think about helping people in this way is super exciting,” he said.

Prof Reich stressed though that the work, which has been published in the journal eLife, was at a very early stage.He said that there were several scientific issues to overcome before it could move out of his lab and into the clinic.But he said that demonstrating for the first time that cell rejuvenation is possible was a critical step forward.

Image caption, Dolly the sheep was created, using cloning, to find cures for the diseases of ageing The origins of the technique stem from the 1990s, when researchers at the Roslin Institute just outside Edinburgh developed a method of turning an adult skin cell taken from a sheep into an embryo.

It led to the creation of Dolly the cloned sheep.

The Roslin team’s aim was not to create clones of sheep or indeed humans, but to use the technique to create so-called human embryonic stem cells.

These, they hoped, could be grown into specific tissues, such as muscle, cartilage, and nerve cells to replace worn-out body parts.

The Dolly technique was made simpler in 2006 by Prof Shinya Yamanaka, then at Kyoto University.

This resulted in genetic changes that turned the adult cells into stem cells.

In both the Dolly and IPS techniques, the stem cells created need to be regrown into the cells and tissues the patient requires.This has proved difficult and despite decades of effort, the use of stem cells to treat diseases is currently extremely limited.

Prof Reik’s team used the IPS technique on 53-year-old skin cells.But they cut short the chemical bath from 50 days to around 12.Dr Dilgeet Gill was astonished to find that the cells had not turned into embryonic stem cells – but had rejuvenated into skin cells that looked and behaved as if they came from a 23-year old.

He said: “I remember the day I got the results back and I didn’t quite believe that some of the cells were 30 years younger than they were supposed to be.It was a very exciting day!”

The technique cannot immediately be translated to the clinic because the IPS method increases the risk of cancers.

But Prof Reik was confident that now it was known that it is possible to rejuvenate cells, his team could find an alternative, safer method.

“The long-term aim is to extend the human health span, rather than the lifespan, so that people can get older in a healthier way,” he said.

Prof Reik says some of the first applications could be to develop medicines to rejuvenate skin in older people in parts of the body where they have been cut or burned – as a way to speed up healing.The researchers have demonstrated that this is possible in principle by showing that their rejuvenated skin cells move more quickly in experiments simulating a wound.

Image source, Science Photo Library Image caption, Cell-replacement treatments using cloning technology have still to be developed The next step is to see if the technology will work on other tissues such as muscle, liver and blood cells.

Prof Melanie Welham, who is the executive chairman of the Biotechnology and Biological Sciences Research Council, which part-funded the research that led to Dolly the sheep, told BBC News that the long-stalled clinical benefits of the technology may not be that far away.

“If similar approaches or new therapies could rejuvenate immune cells, which we know become less responsive as we age, then in the future it might be possible to boost people’s response to vaccination as well as their ability to fight infections.”

The big question is whether research efforts in this area would lead to a method of whole-body regeneration, an elixir of youth or an anti-aging pill.Prof Reik said this idea was not completely far-fetched.

“The technique has been applied to genetically modified mice and there are some signs of rejuvenation.One study showed signs of a rejuvenated pancreas, which is interesting for its potential to tackle diabetes.”

But Prof Robin Lovell-Badge, of the Crick Institute in London, believes that the scientific hurdles between Prof Reik’s result in the lab and even the simplest clinical applications are considerable.

Nor does he think it will be a trivial process to translate the rejuvenation process to other types of tissue or indeed an anti-ageing pill.

”If you find other chemicals to do the same thing, then that would be good, but they may be just as bad.So it is ambitious to think you are going to find these chemicals easily and that they are going to be safer.

”It is also quite possible that other types of cells would require different conditions that may be hard to control.And whether you could do it with the whole body safely would be such a long way off, that I would think it would be pure speculation.”