The 9am school bell forms the foundation of thousands of family routines across Australia.But if NSW Premier Dominic Perrottet has his way, that could be overhauled, in his state at least.As he announced a women’s economic expert panel to guide government policies yesterday, he called for “revolutionary ideas” to break down structural gender barriers.Shaking up the school day could be one of them.”In my view, 9am until 3pm doesn’t work,” he said.

“You’ve also got challenges with before and after school, you’ve got childcare issues and you’ve got early childhood education.” One thing driving any potential changes is the juggling act working parents have to manage with regard to school hours.The Premier and his wife Helen have six children, and a seventh on the way.NSW Teachers Federation president Angelo Gavrielatos dismissed the idea as a “throwaway statement”.”The supervision of students is a by-product of schooling, it’s not the primary purpose,” he said.A trial of longer school days will begin in NSW later this year, and schools are able to apply to take part.

This is what a new school routine could look like, and what needs to be nutted out first.The school day as we now know it dates to 1880.Section 128 of NSW’s Public Instruction Act stipulated students must assemble in the playground at 8:45am, ahead of classes starting at 9am before being dismissed at 3:20pm.The Act sets down a 10-minute recess break at 10:30am to be spent in the playground.Although some schools have since adopted their own schedules, the Act still forms the bedrock of how school functions today.More than 140 years later, society has changed.

For a start, the pre-federation single-income family dynamic has been transformed.Australian Bureau of Statistics (ABS) data from last June revealed in almost 70 per cent of “couple families” — formed around two people in a relationship who usually live in the same home — both partners were working.Meanwhile about 15 per cent of all families were single-parent households, which can add another layer to the stresses of balancing school and work commitments.The ABS data estimated there were about 416,000 one-parent families with dependents where the parent was employed.Of those, more than 78 per cent were single mothers living with dependents.NSW Education Minister Sarah Mitchell said the school day shouldn’t be set in stone.”Our society is constantly evolving, and it is vital we move with the changes particularly when it comes to education,” she said.”The government is always looking at ways to improve lives for families, and additional flexibility in schools is something that will help.” A driving force behind the Premier’s argument is making school more compatible with modern lifestyles.

But for one expert, that raises a question: what is the purpose of school? Don Carter, a senior education lecturer at the University of Technology Sydney, said answering that needed to be put before debates about hours.”Is it a case that schooling is there as a child-minding facility for parents so that it frees them up to go to work? Are they now medical distribution sites or are they sites of learning?” he said.Dr Carter, a former teacher and head of department, said detailed research into how students learn best should inform decisions.”It might be the case that in the morning you have certain age groups looking at doing some of the particular key learning areas like English and maths, literacy and numeracy, then moving on to other types of key learning areas and activities in the afternoon.

“It has to be finessed, it has to be nuanced, and it has to be based on those age groups rather than a one-size-fits-all approach.” Yesterday Mr Perrottet acknowledged a tailored approach would be required for any changes.Merrylands East Public School in south-west Sydney switched its hours to 8am to 1:15pm a decade ago.The change was in response to a survey showing 72 per cent of parents supported the shift.The school has a recess break and no lunch break but offers the same amount of teaching.

“It’s been quite good, I don’t think I have ever thought of changing and going back because it’s part of the school culture now,” principal John Goh said.Edmund Rice College, a Catholic all-boys secondary school near Wollongong, switched to an 8am to 2pm day for all students after extensive consultation.”It’s always been a positive element to our school and it’s a point of difference that works for us,” principal Stephen Gough said.”They’re actually able to engage in a way that maximises their learning time in the classroom.” Mr Gough said it allowed students more time to pursue extra-curricular activities including part-time work, representative work and after-school study groups.

He said teachers noticed students “switching off” later in the day, especially in summer.What a school day looks like depends on where you live — and more flexible arrangements can be found overseas.Brazil, China, South Africa and South Korea have school start times ranging from 7am to 8am.In France, students are in school for eight hours from 8am some days, but most get Wednesday afternoon off.

Long lunch breaks allowing students to go home to eat with family are built in to many school schedules in Japan and Spain.Students in South Korea are provided with lunch, with school running from 7:30am until 2pm.

Tue Feb 8 , 2022
New York (CNN Business) Spirit and Frontier Airlines on Monday announced a $6.6 billion merger, a combination of low-fare carriers that would create America’s fifth-largest airline. The companies have yet to say what brand they’ll fly under or who would lead management of the new airline.The combined company would offer […] 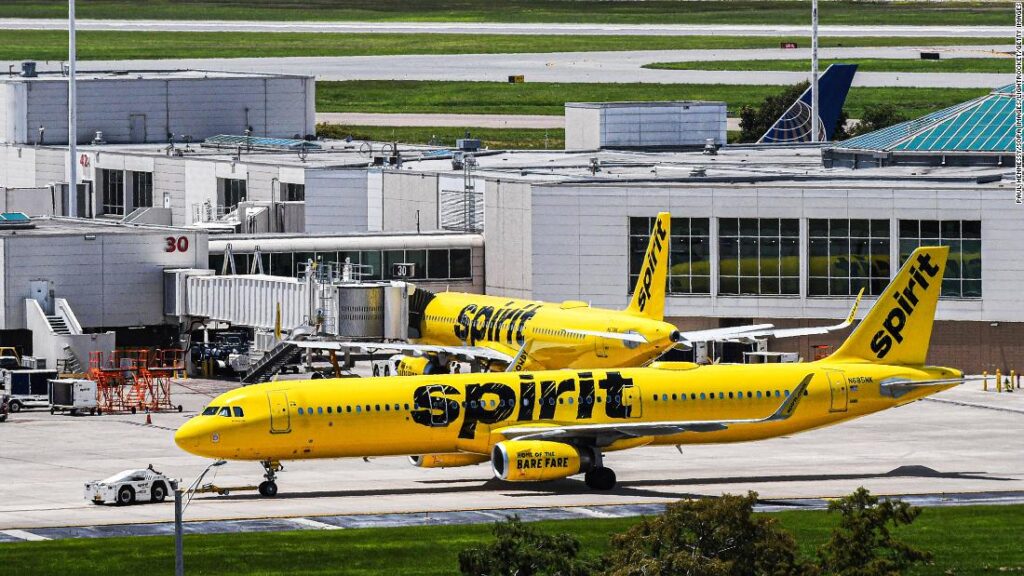