Has Tennessee’s five-star guard considered what’s next in his basketball career? He starred during his freshman season, but it came to an abrupt end in the 76-68 loss to Michigan in the second round of NCAA Tournament Saturday at Gainbridge Fieldhouse.

“With all due respect,” James said as Chandler stared at the floor, “he won’t be answering any questions about his future today.”

If this was Chandler’s final time in a Tennessee uniform, the final image was him emotional, his jersey pulled over his eyes as Michigan head coach [Juwan Howard](//247sports.com/Player/Juwan-Howard-59352) consoled him at midcourt.

“If you saw his emotion (on the court),” Tennessee coach [Rick Barnes](//247sports.com/Coach/Rick-Barnes-1202) said, “it was more in the locker room.Because this group of guys, they’re extremely close.They have really bonded in a way that doesn’t often happen anymore.”

Chandler was dominant in the loss, leading the Vols (27-8) with 19 points, nine assists and four rebounds.

He addressed his future after Tennessee’s win over Arkansas in the regular-season finale on March 5.

“I just want to continue to just get better every single day in practice,” Chandler said at the time.“ … That decision that I’ll make, whatever I want to do (will be when) the season is over.”

The Vols had won eight straight games before getting upset by Michigan, with Chandler leading the team to an SEC Tournament title — the first for the program since 1979 — and 16 wins over its last 18 games.

“My goal is to play that Monday night game,” Chandler continued, referencing the national championship game.

“That’s our goal.Coach (Rick) Barnes says it all the time.So that’s my main thing.

“We didn’t get to be SEC (regular-season) champions, but I want to win the SEC Tournament, eventually make it to the Final Four, win March Madness.That’s my mindset and everybody else’s mindset on the team.”

Tennessee’s Sweet Sixteen hopes were pinned on a six-point lead with 8:27 left, but Michigan went on a 14-4 run to take control of the game and finished by scoring 21 of the game’s final 29 points.

Barnes said every player in this era of college basketball has a decision to make at the end of the season, including Chandler.

“You could ask every guy on the team that,” Barnes said.“Every player has a choice to make if they want to, with the transfer portal being what it is.Going overseas to play, a lot of different thing.”

Chandler was a five-star prospect in the 2021 recruiting cycle.

The Memphis native was the No.9 overall player in the industry-generated 247Sports Composite.He was the No.1 point guard nationally and the No.

“He’s grown tremendously,” Barnes said.“He came in, just a great kid, a great teammate.He never, ever made it about him.I don’t think he ever walked in acting like a one-and-done player.

I don’t think that at all.He came in wanting to win.

“He got so much better and I think that had to do with his teammates.I think Zakai (Zeigler) and Santi (Vescovi), the competition they played with everyday in practice.He was willing to listen.”.

Mon Mar 21 , 2022
The No.3 Tennessee Volunteers came to a surprising end in the Second Round of the 2022 NCAA Men’s Basketball Tournament, losing 76-68 to the No.11 Michigan Wolverines .Freshman guard Kennedy Chandler took the loss hard, but Michigan head coach Juwan Howard was there to show his support to their young […] 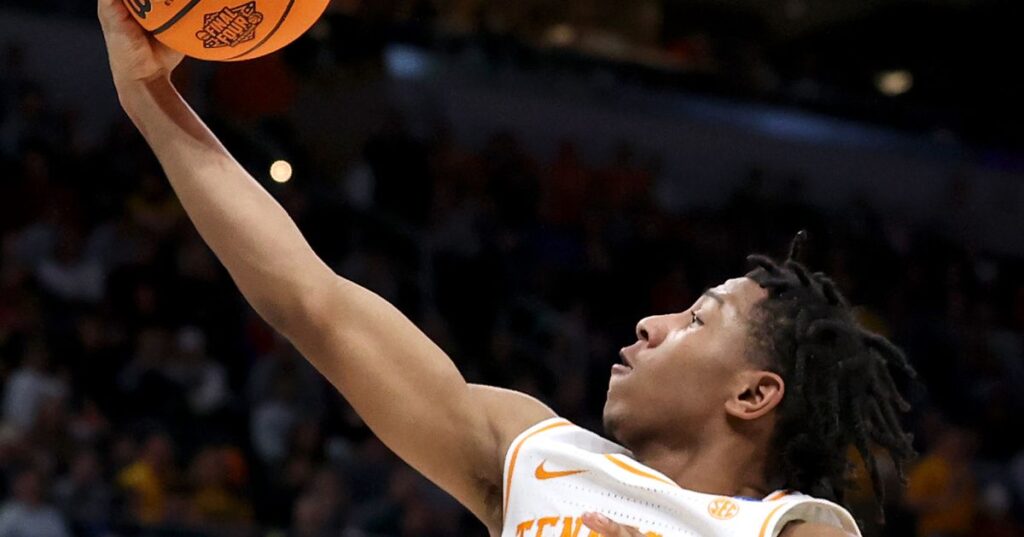