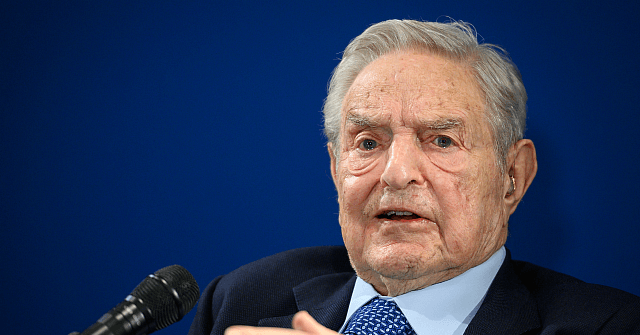 Schweizer exposes the way in which China has bought off much of America’s political, cultural, and financial elite, especially on the left, undermining the U.S.from within as it strives to dominate the world.But one powerful member of America’s elite is notable for not being owned by China: George Soros.

In fact, to the extent Soros appears in Schweizer’s book , it is as one of the good guys, telling the truth about the threat China poses.

“Longtime global investor George Soros has called out [investment management company] BlackRock for its financial efforts in China, declaring that it is on the ‘wrong side’ of the struggle between Beijing and the West, and noted that BlackRock’s efforts ‘will damage the national security interests of the U.S.and other democracies,’” Schweizer notes.

Soros has been calling out China for years.In an interview with the New York Times in 2019, Soros warned that China is a “mortal enemy,” and “the worst threat to an open society.” He added: “We should recognize it: It’s a different system.It’s totally opposed to ours, diametrically opposed to ours.”

Soros earned a rebuke from China: “We hope the relevant American can correct his attitude, not be shortsighted, and hold an objective, rational and correct opinion of China’s development.”

Yet Soros kept going.Last year, he wrote in the Wall Street Journal that BlackRock’s investment in China “imperils the national security interests of the U.S.and other democracies because the money invested in China will help prop up President Xi’s regime, which is repressive at home and aggressive abroad.

Congress should pass legislation empowering the Securities and Exchange Commission to limit the flow of funds to China.The effort ought to enjoy bipartisan support.”

Perhaps Soros’s anti-China stance is one of the reasons Democrats have discovered new enthusiasm for legislation that would create a U.S.industrial policy to compete with China.But Republicans have argued that the Democrats’ bill lacks adequate safeguards for U.S.

Moreover, as Schweizer points out, Democrats are swimming in Chinese cash, from the Biden family on down, and pro-China lobbyists are still earning millions.

It is time for Soros to put up or shut up.If he is serious about taking on the Chinese threat, he should take some of the billions that he spends on left-wing groups and start supporting groups that will actually take on the Chinese regime instead.

As it stands, Soros is undermining America’s ability to stand up to China.He is spending millions of dollars on left-wing prosecutors who let criminals out of jail, for example, and making our major cities uninhabitable, much to China’s delight .

Soros is good at backing radical organizations that support boycotts of Israel, the only democracy in the Middle East, whose current government includes an Arab Islamic party.

Instead of demonizing Israel, he should fund organizations that boycott communist China, which is carrying out an actual genocide of Muslims, one whose internment camps recall the Holocaust in Europe, which Soros survived as a boy.

He should also cut funding to pro-China politicians, organizations, and universities.

But Soros isn’t doing any of that.Instead, he’s just writing op-eds and going after BlackRock — a competitor in the investing space.Rather than providing principled opposition to the Chinese Communist Party, it looks like Soros is looking after his own financial interests, perhaps hoping to cut a more lucrative deal with the regime.

Maybe, instead of destabilizing America and other Western countries, Soros should try destabilizing China for a change.For now, he remains part of the problem.

Presidential Election .His recent book, RED NOVEMBER , tells the story of the 2020 Democratic presidential primary from a conservative perspective.He is a winner of the 2018 Robert Novak Journalism Alumni Fellowship.Follow him on Twitter at @joelpollak .

Sat Jan 29 , 2022
Actor Evangeline Lilly revealed she attended the Defeat the Mandates rally in Washington D.C., the same event where Robert F.Kennedy Jr.came under fire for his comments comparing U.S.vaccination policies to the Holocaust.Lilly, who plays Hope Van Dyne / The Wasp in Marvel’s “Ant-Man” films, posted photos from the rally to […]